Instead of using Memorial Day to perpetuate the lies of the war profiteers, let’s examine the costs of war to the 99%.  Kevin Basl, an Iraq war veteran, remembers the eight friends he has lost to suicide, a few of the twenty soldiers who commit suicide every day. He also writes about soldiers who were poisoned by toxic burn pits and Agent Orange, which impacts the lives of their offspring. And he writes about the translators and service workers who died in hazardous areas. 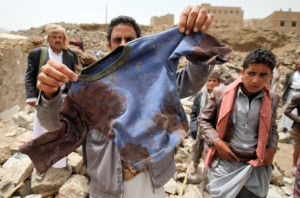 In contrast to the horrific bombing in Manchester this week, Jon Queally of Common Dreams writes about the innocent civilians that were killed in Yemen by US Navy Seals around the same time. The first to be killed was a 70-year old partially-blind man named Nasser al-Adhal who came to his door to welcome ‘guests,’ who turned out to be the Seals. Over the past month, US bombs killed a record number of civilians in Syria including 44 children and 36 women.

How much support would there be for war if each of the victims were described in the media the way that the Manchester victims were, if we saw the humanity of every civilian casualty? It would certainly be clearer to the public why the ‘war on terror’ has brought greater hatred for Western countries and insecurity to the world.

Over the past sixteen years, the United States has spent $5 trillion on the ‘war on terror.’ Thousands of billions have been spent on weapons, vehicles and equipment, contractors who provide goods and services, oil and gas to fuel the military machine, medical treatment for the injured and more. Imagine what good those thousands of billions of dollars could have done if they were spent on positive programs such as living wage jobs to repair failing infrastructure and transition to a clean energy economy, building high quality public schools and affordable housing, relieving student debt, and providing health care to every person. What if instead of funding the largest polluter in the world, the US military, we gave aid to countries that are being devastated by the climate crisis? Think about the global stability that could be gained by providing food and water in times of drought. 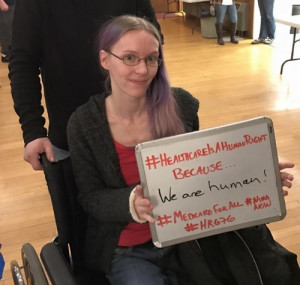 The current budget being proposed by the Trump administration is the opposite of a budget for the people. It includes tens of billions more for the Pentagon andcuts to critical social services such as Medicaid and food stamps. Sarah Lau, a young mother with multiple health conditions, describes what it is like to live in fear of not being able to access to health care under Medicaid. Like millions of others with chronic health conditions who can’t afford care under private insurance, Sarah’s family is forced to live in poverty so that she qualifies for Medicaid.

Zinn said that Memorial Day is a time to destroy the weapons that endanger us. This week a United Nation’s initiative released a draft of a new treaty to prohibit nuclear weapons. Steven Starr explains that “a nuclear war fought between emerging nuclear weapon states—with less than 1 percent of the explosive power contained in the global nuclear arsenals—can produce catastrophic long-term damage to global environment and weather.” A ‘nuclear winter’ would create prolonged cold temperatures, widespread famine and a loss of ultraviolet light protection. In support of the treaty, women are organizing “Ban the Bomb” marches on June 17 and divestment campaigns are also planned.

It will take organized popular power to win the nuclear weapons ban and  rein in US Empire. President Trump’s recent trip to the Middle East demonstrates that he will continue the lies that permit expanding US imperialism. Robert Fiskdescribes Trump’s scripted events that deny reality. Rather than praising Iran for its recent election of a moderate leader who signed the nuclear agreement two years ago, Trump stood with Saudi Arabia and Israel to demonize Iran, which is, like Syria, predominantly Shia. And, he proudly proclaimed a record size arms sale, beating former President Barak Obama’s previous record, of 100 billion dollars. Turns out it may not be as large as he claims, but it continues the US way of war — the empire of chaos spreading insecurity with more arms sales, drone attacks, civilian killings and escalation. 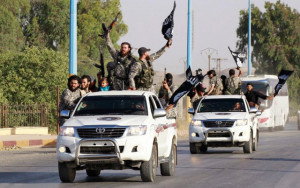 While Trump speaks of peace, he is fomenting dangerous sectarianism between Sunnis and Shias in the region. This sectarianism, created during the US attack in Iraq, is the foundation for the rise of ISIS. Nauman Sadiq explains that “the creation of the Islamic State and myriads of other Sunni Arab jihadist groups in Syria and Iraq has as much to do with the unilateral invasion of Iraq back in 2003 under the Bush Administration as it has been the doing of the Obama Administration’s policy of funding, arming, training and internationally legitimizing the Sunni militants against the Shi’a-dominated Syrian regime since 2011-onward in the wake of the Arab Spring uprisings in the Middle East and North Africa region.”

Shamus Cooke describes what he calls “The Trump Doctrine” in the Middle East and how it may be used to rescue his floundering presidency. There is bipartisan support in Washington, DC for greater intervention in the region and the escalation of tensions with Russia that will result. Cooke concludes with “If the Trump resistance movement in the United States doesn’t quickly prioritize a real anti war strategy, there will be little resistance left to speak of as we descend into war.”

War Is A Moral Injury To The Nation 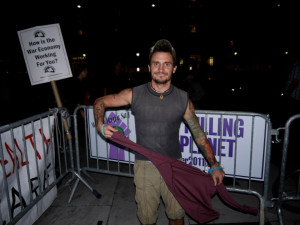 Not only is war costly in terms of dollars — making up more than 50% of US discretionary spending — and lives, it is a moral injury to the people involved and the nation.

Jacob George a veteran and antiwar activist who joined us at Freedom Plaza at the Occupation of Washington, DC talked about “moral injury.” This was the injury that killed him. He was one of the thousands of vets who take their own life each year. He sang “Soldiers Heart”:

“I’m just a farmer from Arkansas, there’s a lot of things I don’t understand, like why we send farmers to kill farmers in Afghanistan. I did what I’s told for my love of this land. I come home a shattered man with blood on my hands.

“Now I can’t have a relationship, I can’t hold down a job. Some may say I’m broken, I call it Soldier’s Heart. Every time I go outside, I gotta look her in the eyes knowing that she broke my heart, and turned around and lied.

The Reverend Dr. Martin Luther King, Jr. put this moral injury into societal termswhen he said: “A nation that continues year after year to spend more money on military defense than on programs of social uplift is approaching spiritual doom.”

On this Memorial Day let us contemplate the moral injury we do to our nation every day in the never ending wars of the 21st Century as we march toward spiritual doom and recognize that another future is possible if we organize to create it.

War culture runs deep in the United States. You can see the glorification of war consistently once you are aware of it – it is expressed in entertainment, the war memorials that are in every town, and the deference we are expected to show to people in the military, e.g. special treatment at airports. This war culture equates patriotism with the worship of the military. And it is on broad display every Memorial Day.

Now that we are sixteen years into the “war on terror”, even though a war against a tactic is nonsense – especially given that terrorism grows as the US bombs more countries and kills more civilians – this Memorial Day is a good time to question who benefits from war and who pays the price. Highly decorated Marine, Smedley Butler, answered these questions this way:

“War is a racket. It always has been.

A racket is best described, I believe, as something that is not what it seems to the majority of the people. Only a small “inside” group knows what it is about. It is conducted for the benefit of the very few, at the expense of the very many. Out of war a few people make huge fortunes.”

The myth we are led to believe is that soldiers are defending “our freedom,” but the reality is that war is the tire iron used by the corporate mafia state to exploit people and the planet. War is a very lucrative business for the wealthy. For the rest of us, war is costly. 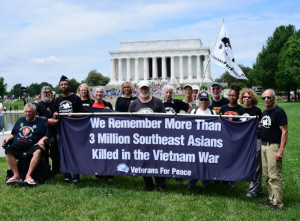 Brian Trautman of Veterans for Peace quotes an article that Howard Zinn wrote about Memorial Day in the Boston Globe in 1976. Zinn urged us to use the day to reflect on our national priorities, writing “Memorial Day will be celebrated … by the usual betrayal of the dead, by the hypocritical patriotism of the politicians and contractors preparing for more wars, more graves to receive more flowers on future Memorial Days. The memory of the dead deserves a different dedication. To peace, to defiance of governments.”… “Memorial Day should be a day for putting flowers on graves and planting trees. Also, for destroying the weapons of death that endanger us more than they protect us, that waste our resources and threaten our children and grandchildren.” Veterans for Peace is holding two days of events around Memorial Day in Washington, DC “to stop hegemonic thinking, dismantle the military-industrial complex, and demand a transformation of national priorities from death and destruction to social uplift and peace.”

GENEVA – The risk of nuclear weapons being used is at its highest since World War Two, a senior U.N. security expert said on Tuesday, calling it an “urgent” issue that the world should take more seriously.

Renata Dwan, director of the U.N. Institute for Disarmament Research (UNIDIR), said all states with nuclear weapons have nuclear modernization programs underway and the arms control landscape is changing, partly due to strategic competition between China and the United States.

Traditional arms control arrangements are also being eroded by the emergence of new types of war, with increasing prevalence of armed groups and private sector forces and new technologies that blurred the line between offense and defense, she told reporters in Geneva.

With disarmament talks stalemated for the past two decades, 122 countries have signed a treaty to ban nuclear weapons, partly out of frustration and partly out of a recognition of the risks, she said.

“I think that it’s genuinely a call to recognize – and this has been somewhat missing in the media coverage of the issues – that the risks of nuclear war are particularly high now, and the risks of the use of nuclear weapons, for some of the factors I pointed out, are higher now than at any time since World War Two.”

The nuclear ban treaty, officially called the Treaty for the Prohibition of Nuclear Weapons, was backed by the International Campaign to Abolish Nuclear Weapons (ICAN), which won the Nobel Peace Prize in 2017.

The treaty has so far gathered 23 of the 50 ratifications that it needs to come into force, including South Africa, Austria, Thailand, Vietnam and Mexico. It is strongly opposed by the United States, Russia, and other states with nuclear arms.

Cuba also ratified the treaty in 2018, 56 years after the Cuban missile crisis, a 13-day Cold War face-off between Moscow and Washington that marked the closest the world had ever come to nuclear war.

Dwan said the world should not ignore the danger of nuclear weapons.

“How we think about that, and how we act on that risk and the management of that risk, seems to me a pretty significant and urgent question,” she said.

She added that it was not being adequately addressed in arms control talks or multilateral bodies such as the U.N. Security Council nor by bilateral arrangements between states.

On Wednesday, China’s disarmament ambassador in Geneva accused Washington of sabotaging and tearing up deals and having a “Cold War mentality”, and said Washington displayed bullying behavior.