Last month’s homicidal horror at Stoneman Douglas High School in Florida has Americans searching for answers to the most elemental question a parent can ever ask. How can we, Americans want to know, protect our kids?

Overwhelming majorities of us, the polls tell us, feel that the answer involves some sort of meaningful limits on who can get guns and what kinds of guns they can get. But most of us also seem to feel that our ongoing epidemic of mass shootings reflects much more than public policy missteps on how we do guns.

In fact, elsewhere in the world, we have nations —like Mexico and Brazil — that have tight controls on private firearms and still suffer high levels of homicidal violence.

Other nations with high homicide rates have more permissive laws on guns. But nations that experience rampant homicidal violence do share one communality. All these nations have high levels of economic inequality — just like the United States.

How does economic inequality translate into homicide? One link: mental health. Nations with high levels of inequality also exhibit high levels of mental ill-health. The constant stress that life in deeply stratified societies creates, researchers have detailed, undermines both our physical and mental well-being.

But mental illness hardly tells the full story either. Those who shoot and kill don’t always happen to be deranged. They do, on the other hand, typically tend to feel disrespected.

Richard Wilkinson, the British social scientist who may well be the world’s most perceptive researcher on the “psychosocial” impact of economic inequality, will never forget a conversation he once had with a prison psychologist. Over his 25 years of prison practice, the psychologist told him, he had yet to see an act of violence notcaused by people feeling disrespected or humiliated.

Analysts all around the world have noted the power of these “triggers to violence.” In South Africa, by some measures the world’s most unequal nation, the Centre for the Study of Violence and Reconciliation has traced the vast majority of homicides to “arguments that got out of hand.”

In the United States, FBI statistics show, over half of our murders stem simply from “the sense that someone had been dissed.” In unequal societies, “minor” slights routinely turn into major tragedies

But why? What does inequality unleash within us? Social scientists have a hunch. The more unequal a society, they note, the more status matters. With rising inequality comes rising status anxiety. None of us want to be seen as “losers,” and we especially want to avoid that status in societies where a rising gap between “winners” and ‘losers” has upped the competitive stakes.

So we do we can to be seen as winners. We buy, for instance, the consumer goods that signal success. We even go deep in debt to buy them. And if we can’t afford these “usual markers of status,” as Maia Szalavitz noted this past December in a Guardiananalysis, we cling ever more ferociously to our only remaining source of value, our self-respect.

“If your social reputation in that milieu is all you’ve got,” explains Martin Daly, a neuroscientist at Canada’s McMaster University, “you’ve got to defend it.”

In more equal milieus, by contrast, these intense pressures to save face — at any cost — do not poison our every social interaction. We can be bumped without feeling bruised.

In these more equal societies, where we rank on the status hierarchy simply matters less, since most people stand on the same economic rungs. But if the gaps between those rungs should start widening, then where we rank can trigger us to fury.

Real — and much too often deadly.

Sam Pizzigati co-edits Inequality.org. Among his books on maldistributed income and wealth: The Rich Don’t Always Win: The Forgotten Triumph over Plutocracy that Created the American Middle Class, 1900-1970. His latest book, The Case for a Maximum Wage, will appear this spring. Follow him at @Too_Much_Online.

Getting Granular on America’s Income Distribution

A Congressional Budget Office report once again reveals a rich outpacing — by a wide margin — everyone else.

Back in the 1980s, the decade that saw researchers start detailing America’s increasing concentration of income and wealth, flacks for the emerging Reagan economic order disdainfully dismissed the significance of the alarming new data.

Over on Capitol Hill, researchers at the Congressional Budget Office would eventually put that conservative case to the test. They started producing periodic reports that took all sources of income into account, everything from wages and salaries to food stamps and unemployment benefits — and then totaled up all these numbers, by income level, before and after taxes.

What did the CBO’s statistical sleuths end up finding? Plenty of growing inequality.

The Congressional Budget Office has just released the latest iteration of its U.S. household income distribution series, and this new research rates as the nonpartisan agency’s most comprehensive yet. The freshly crunched numbers explore the income distribution story in 2014, the most recent year with complete statistics available, and then trace that story back 35 years to 1979, the year before Ronald Reagan won the White House. 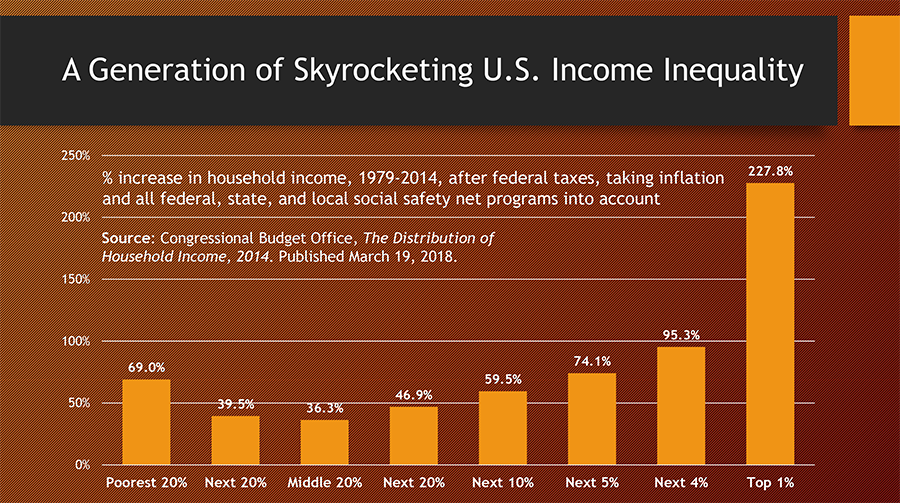 In 2014, Barack Obama sat in the White House. By that year, the Affordable Care Act — legislation that both increased health benefits for lower-income Americans and increased federal taxes on higher-income Americans — had gone almost fully into effect. But those changes, the new CBO report shows, didn’t turn out to be enough to reverse rising inequality.

How much more significantly? After totaling all varieties of income and government benefits — and subtracting out federal taxes — the CBO researchers found that poorest 20 percent of U.S. households averaged $31,100 in 2014. Households in the top 1 percent of the nation’s 2014 income distribution averaged $1,178,600.

This gap would have been considerably wider without the government benefits the CBO labels “means-tested transfers,” the cash and in-kind services lower-income households receive from programs like Medicaid. In 2014, these programs increased the incomes of the poorest fifth of American households by an average 64 percent.

A sign of egalitarian progress worth applauding? Most certainly. But that progress, after only a year-plus of the Trump administration, has faded. Tax rates on our richest have sunk, as has budget support for basic social benefits.

But in 2014, even with that progress, the divide between America’s rich and everyone else was still widening, continuing the income tilt to the top that the new CBO report tracks back to 1979.

Between 1979 and 2014, after figuring in all taxes and social program transfers, the after-tax incomes of America’s top 1 percent rose over three times faster than average incomes in the bottom 20 percent — and over six times faster than incomes in America’s statistical middle class, those households in the exact middle 20 percent of the nation’s income distribution.

Middle- and low-income Americans have paid a heavy price for those few extra dollars per week. Their schools have become more overcrowded, their streets more potholed, and their college costs much more expensive as tax giveaways to the rich and powerful shrink the budgets for basic public services.

Average Americans have a right to be upset. Wealthy Americans like Donald Trump have no right to exploit their anger.

Sam Pizzigati co-edits Inequality.org. Among his books on maldistributed income and wealth: The Rich Don’t Always Win: The Forgotten Triumph over Plutocracy that Created the American Middle Class, 1900-1970. His latest book, The Case for a Maximum Wage, will appear this spring. Follow him at @Too_Much_Online.

More from Inequality.org, Chuck Collins and the team!

Emily Badger, Claire Cain Miller, Adam Pearce, and Kevin Quealy, Extensive Data Shows Punishing Reach of Racism for Black Boys, The New York Times. Black boys raised in America, even if they live in some of the most well-to-do neighborhoods, still earn less in adulthood than white boys with similar backgrounds, according to a sweeping new study that traced millions of life histories.

Naomi Klein, The Battle for Paradise, The Intercept. Puerto Ricans and ultra-rich “Puertopians” are locked in a pitched struggle over how to remake the island.

Dean Baker, Are the Trump Tax Cuts Working and Does Anyone Care? Truthout. The investment boom the Trump tax cuts for the wealthy are supposedly spurring exists only in the realm of political propaganda.

Lenore Palladino, Who Is Watching Wall Street? Boston Review. A perceptive history of stock buybacks that takes us into the Trump era.

Ben Joravsky, Let’s make Pritzker and Rauner pay more — a lot more — in state income taxes, Chicago Reader. The two billionaires slugging it out in the Illinois gubernatorial race may be in for a surprise.