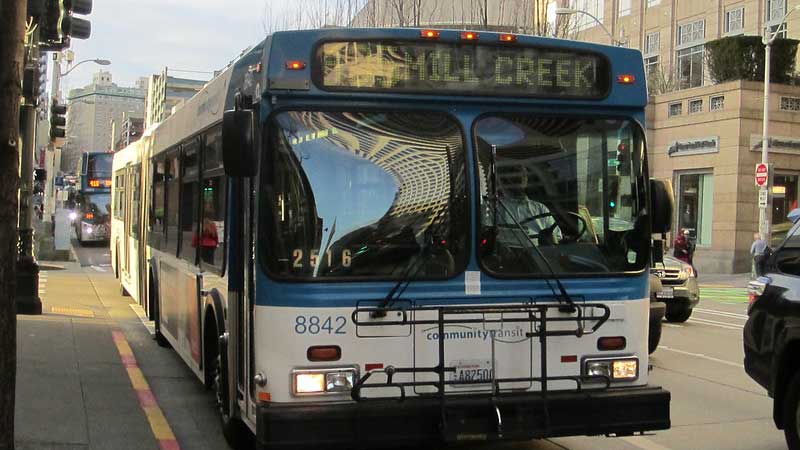 For low-income workers, car ownership can represent the price of admission to the economy and economic mobility. Subsidizing cars for low-income households, as one solution proposes, could benefit these households in the short term—with potentially less environmental impact than one might imagine. In the longer term, car dependence can be reduced by improving low-income workers’ access to jobs by transit. A new study, published in Case Studies on Transport Policy, focuses on the spatial mismatch between low-wage jobs and transit service in Montreal to understand where improvements to the transit system could help lower car dependence, and what those improvements might be.

Low-wage jobs (including those in the retail, sales-and-service, and restaurant and hospitality sectors) are dispersed throughout the region, including in areas that are not well served by transit. Other studies have found that car use is highest for low-income workers in the outer suburbs of Montreal at roughly 70 percent of mode share, and dips to 14 percent in central areas better served by transit.

Fortunately, according to the study, increasing bus frequency to low-income neighborhoods can reduce the need to commute by car for those workers. “For areas with a high proportion of [low-income] workers, an increase in 2.5 route-trips per hour is associated with a 0.13 (13 percentage points) decrease in the modal share of car,” notes the study, “while for areas with a low proportion of [low-income] workers (0.05), it is associated with a decrease of 0.01” (Figure 1). The study also indicates that having a convenient Metro stop can reduce car commuting among low-income workers by 19 percent. For that reason, the authors suggest that more frequent bus services could be a good, low-cost solution to reducing car dependence.

The main reason targeted bus improvements can have such an impact on how workers travel is because they connect people to more jobs within shorter periods of time—a principle that can be measured in concrete ways using a growing number of accessibility analysis tools. Conveyal, one of the providers featured in SSTI’s new Measuring Accessibility guide, has just published their R5 routing package for the R statistical computing language. This promising resource leverages Open Street Map and GTFS to offer practitioners another open-source avenue to conveniently calculate and map accessibility metrics.