Researchers propose three separate ways to avoid blackouts if the world transitions all its energy to electricity or direct heat and provides the energy with 100 percent wind, water and sunlight. The solutions reduce energy requirements, health damage and climate damage.

Key elements of the solution applicable to different cases are to

Renewable energy solutions are often hindered by the inconsistencies of power produced by wind, water and sunlight and the continuously fluctuating demand for energy. New research by Mark Z. Jacobson, a professor of civil and environmental engineering at Stanford University, and colleagues at the University of California, Berkeley, and Aalborg University in Denmark finds several solutions to making clean, renewable energy reliable enough to power at least 139 countries. 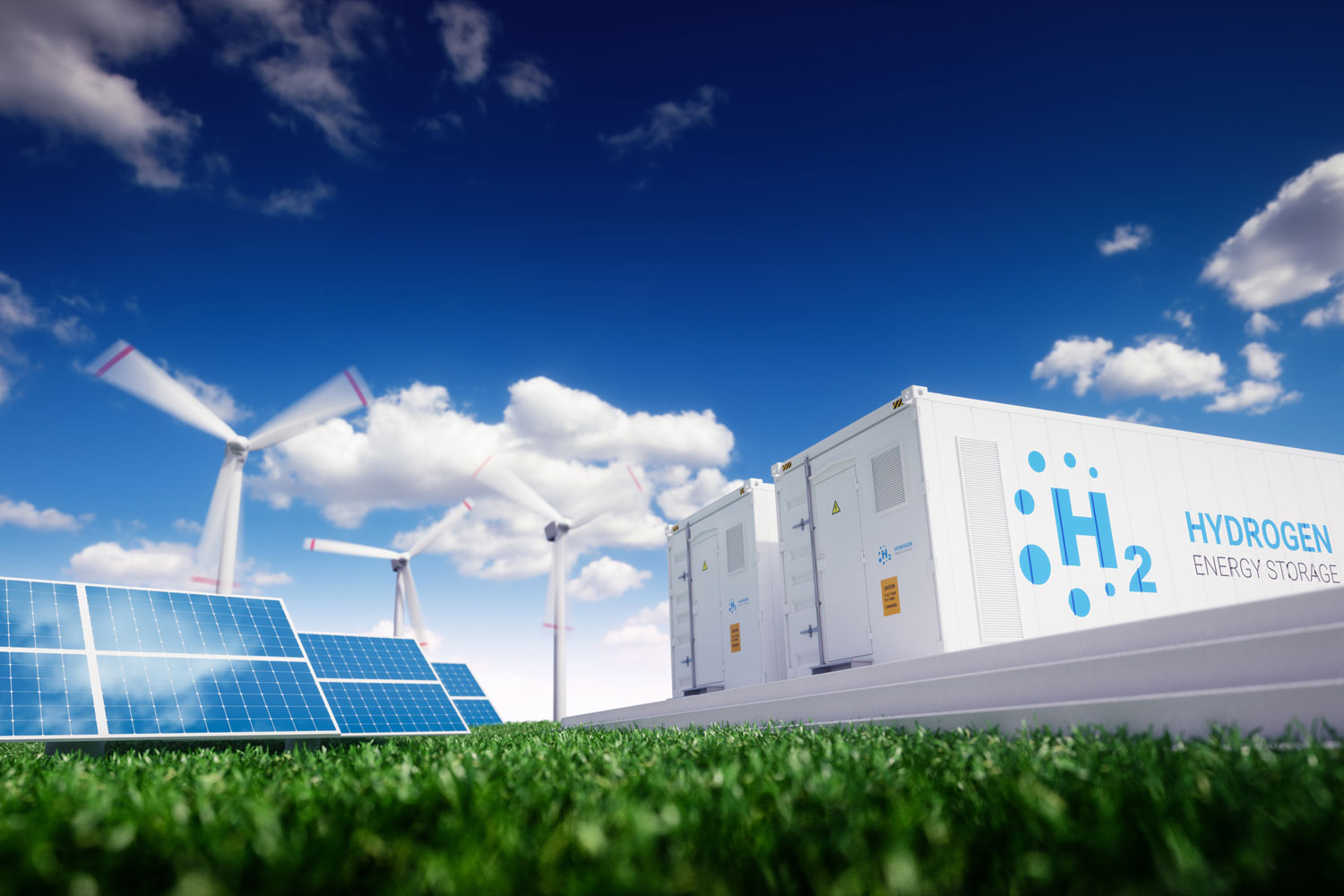 In their paper, published as a manuscript this week in Renewable Energy, the researchers propose three different methods of providing consistent power among all energy sectors – transportation; heating and cooling; industry; and agriculture, forestry and fishing – in 20 world regions encompassing 139 countries after all sectors have been converted to 100 percent clean, renewable energy. Jacobson and colleagues previously developed roadmaps for transitioning 139 countries to 100 percent clean, renewable energy by 2050 with 80 percent of that transition completed by 2030.

The present study examines ways to keep the grid stable with these roadmaps.

“Based on these results, I can more confidently state that there is no technical or economic barrier to transitioning the entire world to 100 percent clean, renewable energy with a stable electric grid at low cost,” said Jacobson, who is also a senior fellow at the Stanford Precourt Institute for Energy and the Stanford Woods Institute for the Environment. “This solution would go a long way toward eliminating global warming and the 4 million to 7 million air pollution–related deaths that occur worldwide each year, while also providing energy security.”

The paper builds on a previous 2015 study by Jacobson and colleagues that examined the ability of the grid to stay stable in the 48 contiguous United States. That study only included one scenario for how to achieve the goals. Some criticized that paper for relying too heavily on adding turbines to existing hydroelectric dams – which the group suggested in order to increase peak electricity production without changing the number or size of the dams. The previous paper was also criticized for relying too much on storing excess energy in water, ice and underground rocks. The solutions in the current paper address these criticisms by suggesting several different solutions for stabilizing energy produced with 100 percent clean, renewable sources, including solutions with no added hydropower turbines and no storage in water, ice or rocks.

“Our main result is that there are multiple solutions to the problem,” said Jacobson. “This is important because the greatest barrier to the large-scale implementation of clean renewable energy is people’s perception that it’s too hard to keep the lights on with random wind and solar output.”

At the heart of this study is the need to match energy supplied by wind, water and solar power and storage with what the researchers predict demand to be in 2050. To do this, they grouped 139 countries – for which they created energy roadmaps in a previous study – into 20 regions based on geographic proximity and some geopolitical concerns.

Unlike the previous 139-country study, which matched energy supply with annual-average demand, the present study matches supply and demand in 30-second increments for 5 years (2050-2054) to account for the variability in wind and solar power as well as the variability in demand over hours and seasons.

For the study, the researchers relied on two computational modeling programs. The first program predicted global weather patterns from 2050 to 2054. From this, they further predicted the amount of energy that could be produced from weather-related energy sources like onshore and offshore wind turbines, solar photovoltaics on rooftops and in power plants, concentrated solar power plants and solar thermal plants over time. These types of energy sources are variable and don’t necessarily produce energy when demand is highest.

The group then combined data from the first model with a second model that incorporated energy produced by more stable sources of electricity, like geothermal power plants, tidal and wave devices, and hydroelectric power plants, and of heat, like geothermal reservoirs. The second model also included ways of storing energy when there was excess, such as in electricity, heat, cold and hydrogen storage. Further, the model included predictions of energy demand over time.

With the two models, the group was able to predict both how much energy could be produced through more variable sources of energy, and how well other sources could balance out the fluctuating energy to meet demands.

Scenarios based on the modeling data avoided blackouts at low cost in all 20 world regions for all five years examined and under three different storage scenarios. One scenario includes heat pumps – which are used in place of combustion-based heaters and coolers – but no hot or cold energy storage; two add no hydropower turbines to existing hydropower dams; and one has no battery storage. The fact that no blackouts occurred under three different scenarios suggests that many possible solutions to grid stability with 100 percent wind, water and solar power are possible, a conclusion that contradicts previous claims that the grid cannot stay stable with such high penetrations of just renewables.

Overall, the researchers found that the cost per unit of energy – including the cost in terms of health, climate and energy – in every scenario was about one quarter what it would be if the world continues on its current energy path. This is largely due to eliminating the health and climate costs of fossil fuels. Also, by reducing water vapor, the wind turbines included in the roadmaps would offset about 3 percent of global warming to date.

Although the cost of producing a unit of energy is similar in the roadmap scenarios and the non-intervention scenario, the researchers found that the roadmaps roughly cut in half the amount of energy needed in the system. So, consumers would actually pay less. The vast amount of these energy savings come from avoiding the energy needed to mine, transport and refine fossil fuels, converting from combustion to direct electricity, and using heat pumps instead of conventional heaters and air conditioners.

“One of the biggest challenges facing energy systems based entirely on clean, zero-emission wind, water and solar power is to match supply and demand with near-perfect reliability at reasonable cost,” said Mark Delucchi, co-author of the paper and a research scientist at the University of California, Berkeley. “Our work shows that this can be accomplished, in almost all countries of the world, with established technologies.”

Jacobson and his colleagues said that a remaining challenge of implementing their roadmaps is that they require coordination across political boundaries.

In light of this geopolitical complication, they are also working on smaller roadmaps to help individual towns, many of which have already committed to achieving 100 percent renewable energy.

Additional co-authors of this paper are Mary A. Cameron of Stanford and Brian V. Mathiesen of Aalborg University in Denmark.

Grid integration studies for 100% all-sector wind, water, and solar scenarios were performed in parallel with global weather forecast modeling of intermittent wind and solar resources for 20 world regions encompassing 139 countries. Low-cost, zero-load-loss solutions were obtained for every 30-s model time step over the five-year period 2050-2054 for two different storage scenarios (Cases A and B) in all 20 regions and a third scenario (Case C) in 626 14 regions tested. In Case A, CSP-storage, batteries, and thermal energy storage dominated storage, and no hydropower turbines beyond current capacity or heat pumps were added. In Case B, thermal energy storage and CSP-with-storage dominated storage, and hydropower turbines were added without increasing the annual-average hydropower output. No batteries or heat pumps were assumed. In Case C, CSP and batteries dominated storage, and heat pumps with no storage replaced all cold and low-temperature heat thermal energy storage. No hydropower turbines were added.

Those costs are costs per unit energy. However, a 100% WWS system without heat pumps requires ~42.5% less energy than does the BAU system in 2050 and a 100% WWS system with heat pumps and no thermal energy storage requires 57.9% less energy than does the BAU system, thus the absolute energy and capital costs to all consumers in a region may be much less with the WWS system. However, these energy costs do not account for cost differences between fossil fuel and electric appliances, vehicles, or machines. While such cost differences in 2050 are highly uncertain, many such technologies are similar in cost today between WWS and BAU, and the rest are assumed here to be similar by 2050. Even if the business costs of WWS appliances, vehicles, and machines are higher than those of BAU in 2050, overall business costs of a transition are expected to be lower than or similar to the BAU level with WWS because of the much lower energy use in the WWS system.

The results of this study suggest that low-cost solutions can be obtained with either (a) CSP with storage, batteries, and thermal energy storage; (b) CSP with storage, additional hydropower turbines, and no batteries or heat pumps; (c) CSP with storage, batteries, and heat pumps but no thermal energy storage or additional hydropower turbines; or (d) combinations of the above. As such solutions are not limited to one 100% WWS pathway. 663 Instead, multiple 100% WWS pathways with different mixes of generation, storage, and transmission, and demand response, are possible.

Key elements of the solution applicable to different cases are to

Results from this study can inform planners and policy makers in 139 countries within 20 world regions about the main ingredients of a fully integrated all-sector 100% clean, renewable, efficient, and reliable energy infrastructure by 2050, if not sooner. As such, the results can guide practical implementation of solutions, including real investment and infrastructure upgrades worldwide.