Latest learning curve for solar PV modules, by @BloombergNEF, shows a record learning rate: 28.5% reduction in cost per Watt for every doubling of cumulative capacity, 1976-2018e! Includes the spectacular 35% drop, forecast for this year. 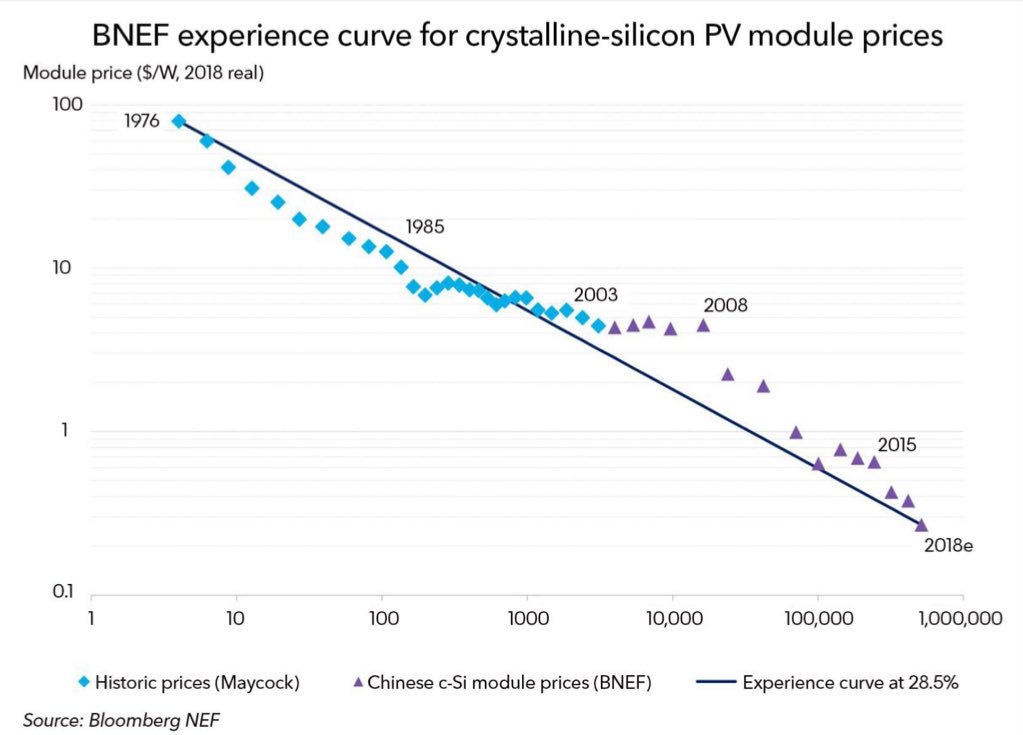 Kees van der Leun‏ @Sustainable205024h24 hours ago
The sustained dramatic improvement in solar PV costs, already low, is spine-chilling for any technology with high capital cost: Dispatchable power will be needed to fill the gaps after wind and solar have done the heavy lifting, but with a low capacity factor.
Also: Fraunhofer Experiments In Chile And Vietnam Prove Value Of Agrophotovoltaic Farming

June 21st, 2018 by Steve Hanley Last November, CleanTechnica brought readers news of an experiment by Fraunhofer Institute For Solar Energy Systems that combined solar panels with agriculture. Fraunhofer calls its unique installation, which mounts the solar panels high enough to allow farm equipment and animals to move freely underneath, agrophotovoltaics or APV. The results from the first experimental program near Lake Constance in southwestern Germany found combining agriculture and farming increased the output of the land by 60% over what it would be if the same land was devoted 100% to farming or 100% to solar panels.

Since last year, Fraunhofer has applied the lessons learned from the Lake Constance experiment to three agricultural environments in Chile and a shrimp farm in Vietnam. In all cases, the benefits suggested by the first pilot project in Germany have been confirmed.

According to a Fraunhhofer press release, three identical 13 kWp APV systems were constructed in various locations in Chile. Researchers were interested in finding out which plants benefited from the shading from the APV array. Sensors measured meteorological data like solar radiation, humidity, soil moisture, and ground temperature.

The third system was set up in a remote region where access to the electricity grid is available but service is frequently interrupted. The APV plant provided electricity for seven families while providing power to an incubator for hatching chicken eggs, among other things.

The three pilot farms will be monitored for three years. Different types of crops will be grown to determine which ones adapt best to the APV environment.  “At the beginning of the project, there was a transfer of technology and know-how from Germany to Chile. In the meanwhile, the transfer is taking place at the same level in both directions. Fraunhofer ISE is profiting from the new experiences with APV in Chile and vice versa,” reports Stephan Schindele, project head of Agrophotovoltaics at Fraunhofer ISE.

The partial shading of crops planted beneath the APV scaffolding can reduce the need for irrigation. Various fruits which normally do not grow well in dry climates with high solar radiation can flourish when shaded by an APV system and livestock can benefit from less exposure to the sun. The electricity generated can power water pumps or desalination systems. In addition, it can be used for cooling and processing crops, making them preservable and therefore more profitable.

In remote regions, the quality of life is improved by access to electricity that provides improved access to information, education, and better medical care. In sub-Saharan Africa, about 92% of the rural population have no access to electricity. APV offers new sources of income to the local population and at the same time reduces the dependence on the fossil fuels that are often used to run diesel generators.

Aquaculture in the Mekong Delta

Fraunhofer ISE is exploring whether APV techniques are applicable to aquaculture at a shrimp farm located in the Mekong Delta where there is increasing competition for land between farmers and renewable energy advocates. Why not make the land support both?

The results of the pilot project at Bac Liêu indicate that APV can significantly reduce carbon emissions while slashing water usage by up to 75%. “By combining aquaculture and photovoltaics, the land use rate increases by at least 65 percent compared to an open field PV plant,” says Max Trommsdorff of Fraunhofer ISE. The APV system provides other benefits, particularly improved working conditions due to the shading provided by the solar panels together with a stable, lower water temperature that helps the shrimp grow faster and healthier.

If APV technology and techniques are expanded to developing countries around the world, it could make “a lasting contribution to improving resource-efficient land use and regenerating parched soil,” claims Stephan Schindele of Fraunhofer ISE. Lower emissions, site specific electrical power, more efficient and profitable farming — APV systems could be the answer to the need for renewable energy in many parts of the world.

Solar panels are wonderful things, but they do take up a lot of space, especially for larger, utility-scale systems. In some densely populated countries like China and India, where loss of farmland can lead to hungry people, floating solar farms are being built to take advantage of the surface area of lakes and rivers. Researchers at the Fraunhofer Institute For Solar Energy Systems have conducted an experiment near Lake Constance — which borders Germany, Lichtenstein, and Switzerland — regarding another solution.

According to a Fraunhofer press release, the experiment involves 720 bi-facial solar panels covering about a third of a hectare of agricultural land (on the Demeter farm cooperative Heggelbach). The panels are mounted high enough to allow the crops planted below to receive almost as much sunshine as they would if the panels were not there and to permit farm machinery to operate beneath them. After a year of trials, the research showed the dual use system increased the total productivity of the land by 60%.

Fraunhofer refers to the dual use system as “agrophotovoltaics,” or APV. “APV has the potential to open up new space that is urgently needed for the PV expansion in Germany, says professor Hans-Martin Henning, the director of Fraunhofer ISE. “At the same time, APV can mitigate the conflicting interests between agriculture and open space PV systems for viable land. Before market readiness, however, other sectors and differently sized systems still must be tested. Also, the technical integration must be further advanced, for example, the implementation of storage.”

The first crops tested were winter wheat, potatoes, celeriac, and clover grass. “The crop yield of clover grass under the PV array was only 5.3 percent less than the reference plot,” reports professor Petera Högy, an agricultural expert at the University of Hohenheim. The yield for potatoes, wheat and celeriac were about 19 percent less.

The 194 kilowatt solar installation generated 1266 kilowatt-hours of electricity per installed kilowatt, one third more than the average value of 950 kilowatt-hours per kilowatt in Germany. 40% of the power produced was used to charge the batteries of the electric farm equipment and harvest crops. The team believes 70% of the energy could be utilized if a storage battery was included in the system. Any excess electricity was sold to Elektrizitätswerke Schönau, an electric utility company that uses 100% renewable energy and is a partner in the project.

“In order to provide the necessary proof-of-concept before market entry, we need to compare further techno-economical applications of APV, demonstrate the transferability to other regional areas and also realize larger systems,” says project manager Stephan Schindele. Experiments involving solar in combination with fruits, berries, hops, and grapes are planned for the future, along with various technologies such as energy storage, special films with organic solar cells, and solar PV water treatment systems.

While more research is needed, the initial results indicate that APV is a significant step forward for solar power in agricultural settings.