Although the United States is lagging behind China and the EU in terms of adding new renewable energy capacity, some states are already growing at a very rapid pace. According to data for 2018 from the Energy Information Administration (EIA), solar and wind accounted for at least 10% of electricity sales in 18 states, which is further evidence that the nation’s transition to renewable energy is fully underway. 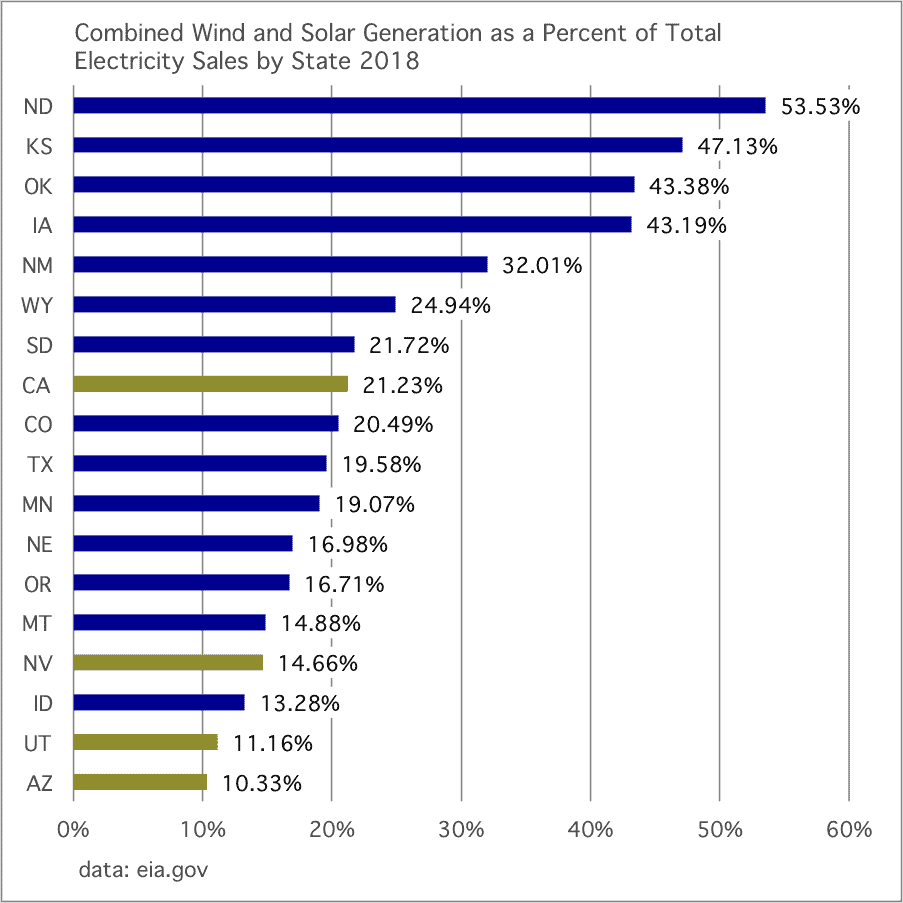 The graph above was made by journalist Gregor Macdonald, where blue indicates that wind is dominant and green shows that solar leads the way in a specific state.

“While one can certainly discount the very high proportion of wind power in sparsely populated Great Plains states, (Kansas, for example, with just 2.9 million people where wind power has now reached 47.13% of electricity sales), it’s impressive that in larger states like CA, CO, TX, and MN combined wind and solar are right around the 20% mark. More intriguing is the continued level of low public awareness that wind and solar have come to not only dominate marginal growth in many domains, but have now reached volumes more typically associated with nuclear power or hydropower. In less than a decade, we have moved the needle from a time when many claimed wind and solar couldn’t scale fast enough, to new complaints these sources are growing too fast. What a great problem to have!” Macdonald wrote on his blog.

According to the August 2018 edition of Electric Power Monthly, an EIA publication, solar in the United States grew by 28% year-on-year to reach 48 TWh – 2.4% of electricity generation nationwide. Together, solar and wind represented almost 10% of the total electricity generation, with wind output growing 11% and expanding beyond traditional strongholds in Texas and the Plains States to more Midwestern states, as well as Oregon and New Mexico. This growth is occurring at the expense of coal, whose use in electricity generation is down 6% year-on-year. Nearly 10 GW of coal was retired in the first six months of 2018 alone. 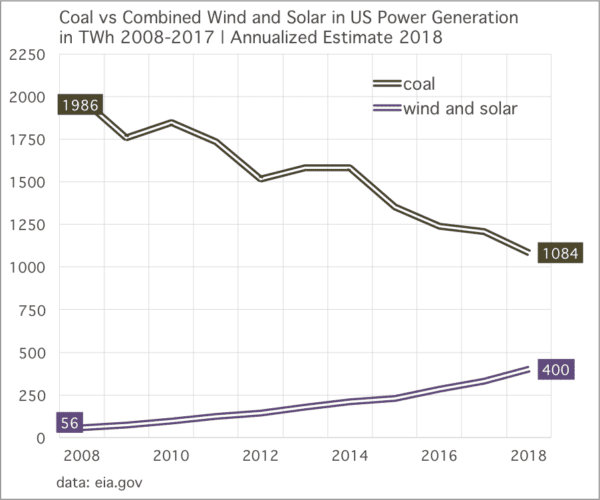 Solar and wind show no signs of stopping their upward growth trend. According to the The American Wind Energy Association’s (AWEA) US Wind Industry Third Quarter 2018 Market Report, seven US states could double their wind capacity in the near-term. Arkansas, Nebraska, New Mexico, South Dakota, and Wyoming, Maryland, and Massachusetts have all enough wind capacity currently under construction that will more than double their capacity upon completion. Meanwhile, the U.S. is expected to more than double its photovoltaic capacity over the next five years, led by growth in California, Arizona, North Carolina, Nevada, Texas, and New Jersey.