Meanwhile residents say the bike networks are neither robust nor half-implemented yet.

Drive-alone commutes to downtown Seattle take a nosedive: Even fewer people are driving to the center city alone, even as jobs increase

The number of downtown Seattle workers who commute by transit is very nearly to half—and fewer people than ever are jumping into their cars alone to go to work, according to new data from Commute Seattle, a private-public partnership that tracks commute trends funded by the Seattle Department of Transportation, King County Metro, Sound Transit, and the Downtown Seattle Association.

Last year, Commute Seattle’s data saw the biggest drop in single-occupancy vehicle (SOV) commutes it had seen so far. This year, Seattle broke its own record. SOV commuting was even less popular—and the drop was that much more dramatic.

When Commute Seattle first started collecting data in 2010, 35.2 percent of commutes happened alone, in a car. Now, that’s down to 25.4 percent, a nearly 5 percent drop in the last year alone.

That drop comes as a record number of jobs—and new people—come to the Seattle area.

Transit made up about 48 percent of downtown commutes in 2017, compared to 42 percent in 2010. The vast majority of those took place on a bus, which has the largest coverage area to Seattle neighborhoods and the surrounding area, but rail commutes nearly doubled since 2010, jumping from 4.9 to 9 percent of the share.

Those walking onto ferries to get to work has just about held steady since 2010, which tracks—many walking onto the ferry don’t have much of a choice. 66 percent of people commuting from a westerly direction took a ferry, with only 5.6 percent opting to drive alone.

That gap in between is about what you’d expect: ride-sharing, biking, walking, and other methods, like telecommuting. Those all remained largely unchanged from previous, although walking ticked up about 2 percent and ride-sharing slightly increased compared to last year.

The share of bike commutes remains largely unchanged since data collection began, holding steady at around 3 percent. But some supplemental data shows that—surprise—people tend to commute less by bike during the colder months. Surveying a smaller data pool than used for the larger survey, 5.9 percent said they rode a bike to work in the fall, when the survey took place, compared to 13.1 percent in warmer months. Walk commutes could also be affected by the survey timing.

Since 2010, though all commute methods besides driving alone have seen some amount of numerical increase.

Commute Seattle attributes the changes to a number of factors.

For example, there’s been a much larger investment in regional transit. After voters approved the Seattle Transportation Benefit District in 2014, Seattle residents living near transit went up from 25 percent in 2015 to 64 percent in 2017. Link Light Rail expanded south to Angle Lake and north to the University of Washington, greatly increasing ridership. Rapidride bus rapid transit corridors reached Seattle in 2012.

So who are the commuters that are still in their cars? People commuted from outside the city at a higher rate than those inside, which isn’t much of a surprise. Overwhelmingly, Bellevue commuters favored driving alone more than anyone else, with a whole 38.3 percent of them commuting to Seattle by SOV. Out of all people commuting from elsewhere on the Eastside—Issaquah, East King County—37.4 made solo drives. (East Link light rail service doesn’t start until 2023.)

That’s not a large percentage of downtown commuters in general, though: only 3 percent of commuters came from Bellevue, and 4 percent from elsewhere in the Eastside. Overwhelmingly, the survey found that commuters to the center city originated somewhere else in Seattle, to the tune of 58 percent.

Out of those commuting from outside the city, northend commuters—Snohomish County, Kirkland—were largely bus-riders, at 49.4 percent. Those coming from South King County and Pierce County had the largest share of train riders, with 25.3 percent.

Of course, ditching an SOV doesn’t mean that people are ditching cars. A recent report by Seattle Times’s Gene Balk found that Seattle’s car population is growing as fast as its human population. But fewer cars are idling in rush hour traffic, which is a start.

This article has been updated to clarify Commute Seattle’s funding sources. 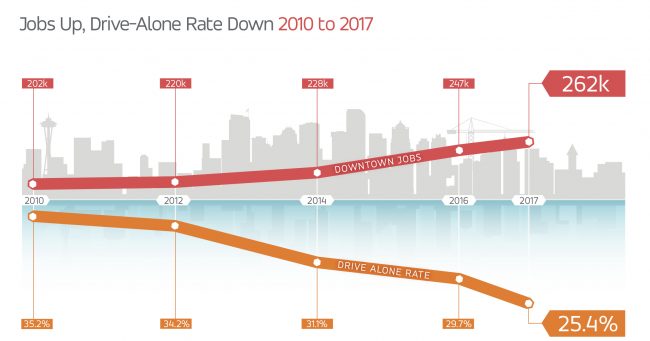 As Seattle is entering the “period of maximum constraint,” with downtown becoming even more inundated with construction projects, more workers in that area are leaving their cars at home and riding transit.

Last year, the drive-alone rate hit an all-time low of 25% of downtown commuters, even as 15,000 jobs were added to the area, according to the 2017 Center City Modesplit Survey. Nearly half of downtown workers instead chose to take the bus or train to their jobs. Adding employees traveling by foot, bike or carpool pushes non-single-occupancy vehicle commute rates above 70%.

Despite a 5% drop in the share of SOV commuting between 2016 and 2017, the share of transit ridership grew by only 1%. Instead, some former drivers were choosing to walk or participate in a carpool.

“Transit works, and we need more of it as quickly as possible. From working with employers to increase telecommuting to speeding up light rail, we can expand our transportation options that make it easier and safer for Seattle residents to get around,” said Seattle Mayor Jenny Durkan in the press release accompanying the report.

Rates of drive-alone downtown commuters have steadily declined since Commute Seattle began tracking travel trends in 2010. Over the last seven years, as 60,000 jobs were added in the downtown core — an increase of 30% — transit usage among commuters has steadily grown, up by 6%, while the drive-alone rate decreased 9%. 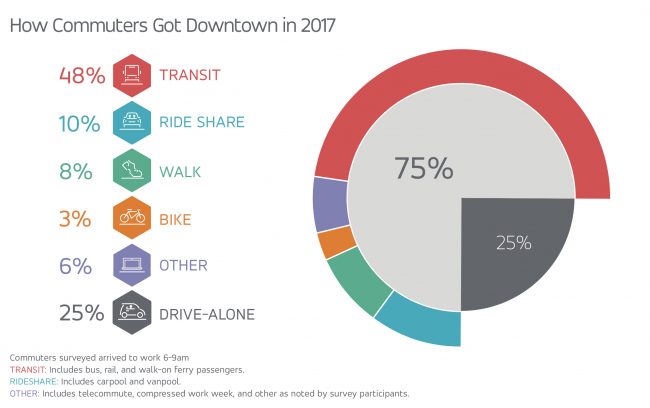 The report also tracks transportation usage rates of employees working for businesses participating in Washington’s Commute Trip Reduction (CTR) program. The survey found the highest SOV commute rates were at employers located in the Uptown and First Hill neighborhoods, with over 35% of employees driving alone to work. Transit usage was highest in Seattle’s commercial core (62%); Pioneer Square (58%); and the Chinatown International District (58%).

Employees in South Lake Union working for CTR-participating companies had the highest walking rate, with 17% of employees commuting to work by foot. That’s far higher than Denny Triangle (13%) and Uptown (8%), which had the second- and third-highest rates of pedestrian commuting.

Beginning in 1992, cities began adopting CTR ordinances which required employers with 100 or more full-time employees at a single worksite who begin workdays between 6:00 and 9:00 a.m. and are located in counties with populations of over 150,000 were required to participate in the CTR program.

Released Wednesday, this year’s modesplit survey was conducted by Commute Seattle, a non-profit that works with businesses to reduce drive-alone rates and is funded by SDOT and other organizations. 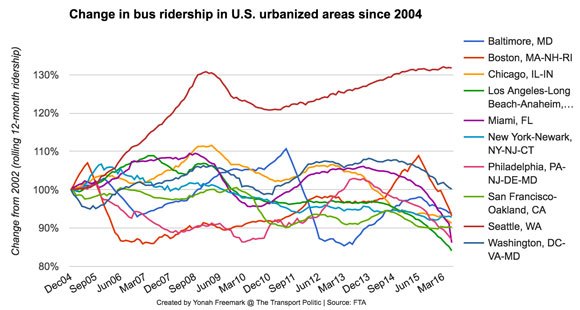 Robert Spillar, Austin’s transportation director, said in a statement that the plan is a “major milestone for Austin’s mobility portfolio,” noting it will address “the multimodal needs of our community” and offer more affordable opportunities to get around the city.

Austin has been a leader in the emerging new mobility space, particularly as a city where the dockless e-scooter trend has exploded — so much so that the Centers for Disease Control and Prevention (CDC) partnered with the city for its first ever epidemiological study on dockless scooters. In January, Austin also became the first U.S. city named for a launch of a sit-down scooter-sharing service.

Despite the progress with scooters, Austin is still considered a car-centric city with high levels of traffic congestion. Leaders hope to change that with the ASMP and the focus on expanding multimodal mobility. The goal to reduce the number of commuters who drive to work alone reflects that desire for change.

It takes a lot of work to change citizens’ minds about cars and their transportation habits, but Austin is not the first city to take on such a task. Atlanta, another heavily car-centric city without a robust transit system, released a long-term transportation plan last year to address the city’s immediate transportation needs and account for long-term regional growth. Like Austin’s plan, Atlanta’s includes elements to get people out of their cars and onto transit options, which requires expanding the existing system and improving service.