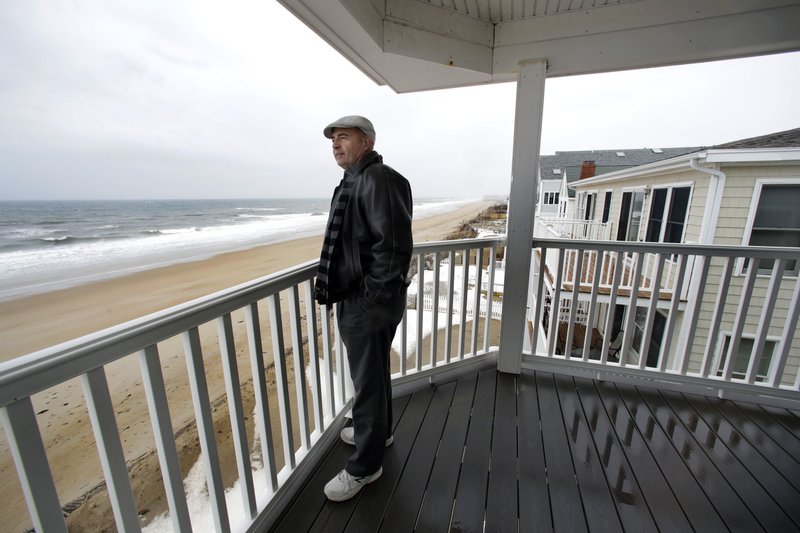 1 of 4
In this Feb. 15, 2019 photo, real estate agent Tom Saab stands on a oceanfront deck at a condo he developed in Salisbury, Mass. Academic researchers say concerns over rising sea levels and increased flooding are having subtle but significant impacts on coastal property values, finding that climate change concerns have sapped more than $15 billion in appreciation from homes along the Eastern Seaboard and Gulf Coast. (AP Photo/Elise Amendola)

Some research suggests rising sea levels and flooding brought by global warming are harming coastal property values. But other climate scientists note shortcomings in the studies, and real estate experts say they simply haven’t seen any ebb in demand for coastal homes.

So how much homeowners and communities should worry — and how much they should invest in remedies — remains an open question.

Nancy Meehan, 71, is considering putting her coastal condo in Salisbury up for sale this year, but she worries buyers will be turned off by the winter storms that churn the seas beside the summer resort town. Her home has been largely spared in the nearly 20 years she’s lived there, she said, but the flooding appears to be worsening along roads and lower properties.

“All my life savings is in my home,” Meehan said of the four-bedroom, two-bathroom condo, which she bought for $135,000. “I can’t lose that equity.”

Nearby, Denis Champagne can’t be sure that rising seas are hurting his waterfront home’s value. The three-story, four-bedroom home has views of a scenic marsh, has been renovated and is blocks from the ocean — yet was assessed at only around $420,000.

“Do I feel that it should be worth more than that?” Champagne said recently in his sun-soaked living room. “I mean, I’m biased, but where can you find this for that price — anywhere?” 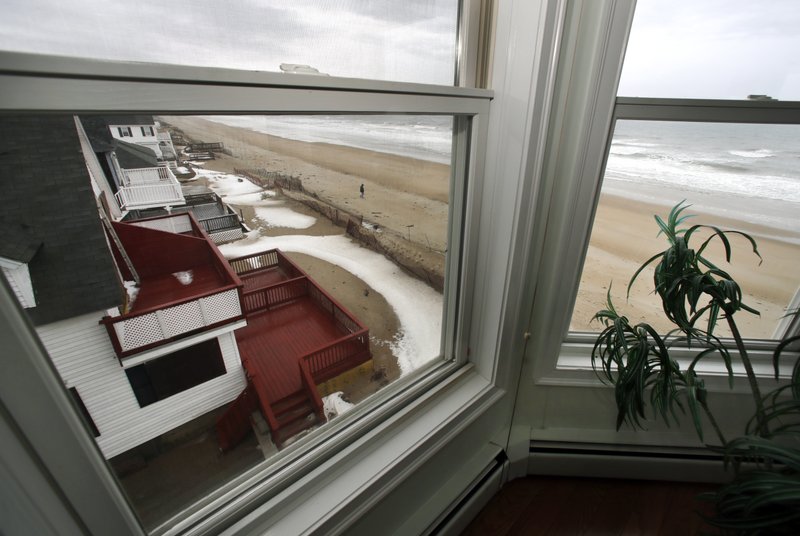 A drop in home values could shatter a community like Salisbury, which relies almost exclusively on beachfront real estate taxes to fund schools, police and other basic services, researchers warn. And, they say, families could face financial ruin if they’ve been banking on their home’s value to help foot the bill for pricey college tuitions or even retirement.

“People are looking at losing tens of thousands of dollars of relative value on their homes,” said Jeremy Porter, a data scientist for the First Street Foundation, which describes itself as a “not-for-profit organization of digitally-driven advocates for sea level rise solutions” on its Facebook page. “Not everyone can sustain that.”

Still, home prices in coastal cities have been rising faster than those of their landlocked counterparts since 2010, according to data provided by the National Association of Realtors.

“The price differential is still there,” he said. “Consumers are clearly mindful that these climate change impacts could be within the window of a 30-year mortgage, but their current behavior still implies that to have a view of the ocean is more desirable.”

A nationwide study by the First Street Foundation suggests climate change concerns have caused nearly $16 billion in lost appreciation of property values along the Eastern Seaboard and Gulf Coast since 2005.

The study singles out Salisbury as the hardest-hit community in Massachusetts. Coastal homes there would be worth $200,000 to $300,000 more if not for frequent tidal flooding and powerful coastal storms, the study suggests. Champagne’s property, for example, would be worth about $123,000 more, according to Flood iQ , a property database the group has developed.

In another recent study , researchers at the University of Colorado Boulder’s School of Business found coastal properties most exposed to sea level rise sold, on average, for 7% less than equivalent properties the same distance from shore but not as threatened by the sea. 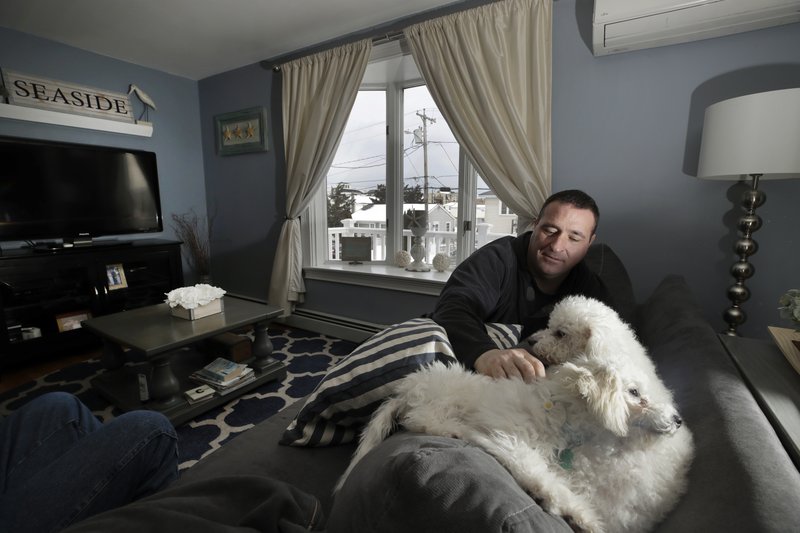 Denis Champagne Jr. plays with his dogs Maebelle and Isabel at home near the coast in Salisbury, Massachusetts. (AP Photo/Elise Amendola)

The three studies are laudable because they attempt to quantify what the insurance industry and federal government had long suspected: that climate change is having tangible harm on home values, said S. Jeffress Williams, a scientist emeritus with the U.S. Geological Survey in Woods Hole, Massachusetts, who wasn’t involved with any of the research.

But Williams and other researchers note the First Street Foundation study uses sea-level rise predictions from the Army Corps of Engineers that are more dire than figures from the National Oceanic and Atmospheric Administration, which usually provides the go-to numbers for such studies.

The decision to use Army Corps projections has “minimal impact” on the study’s assessment of current property values since those figures are based on where flooding is already happening, but it does factor into the study’s future estimates, said Steven McAlpine, a data scientist for the foundation.

“We feel it is a reasonable projection,” he said.

The other two studies largely rely on data from Florida, which is so low and highly developed that in many ways it is an outlier, unaffiliated researchers point out. They also focus only on single-family homes, leaving out huge numbers of condos, high-rises and other multi-family properties. 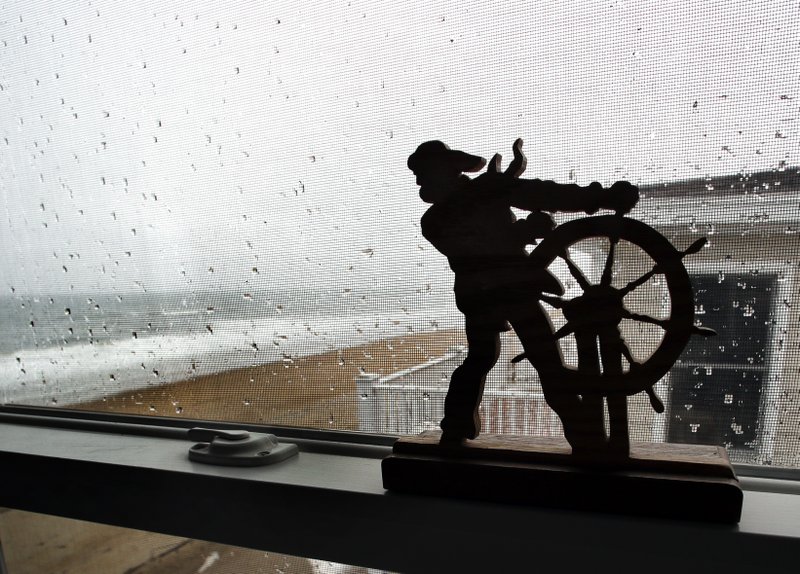 A view out the window of an oceanside condo in Salisbury, Massachusetts. (AP Photo/Elise Amendola)

In Salisbury, real estate broker Thomas Saab insists something is happening with home prices but is not sure whether climate change is behind it.

Two clients in the otherwise strong real estate market, he said, were recently forced to lower their asking prices by tens of thousands of dollars when prospective buyers voiced concerns about storm damage and risks.

“Do I worry prices are coming down? Sure,” Saab said. “Fewer buyers are willing to take the risk. People don’t want to live through nor’easter after nor’easter with no protection.”

He argues there’s a simple solution: Invest in sturdy seawalls as Hampton Beach, the lively resort town just over the border in New Hampshire, did generations ago.

“We can overcome any kind of rising seas if you just let us protect our properties,” Saab said. “Who cares about the climate change? You build a seawall and this whole discussion goes away.”