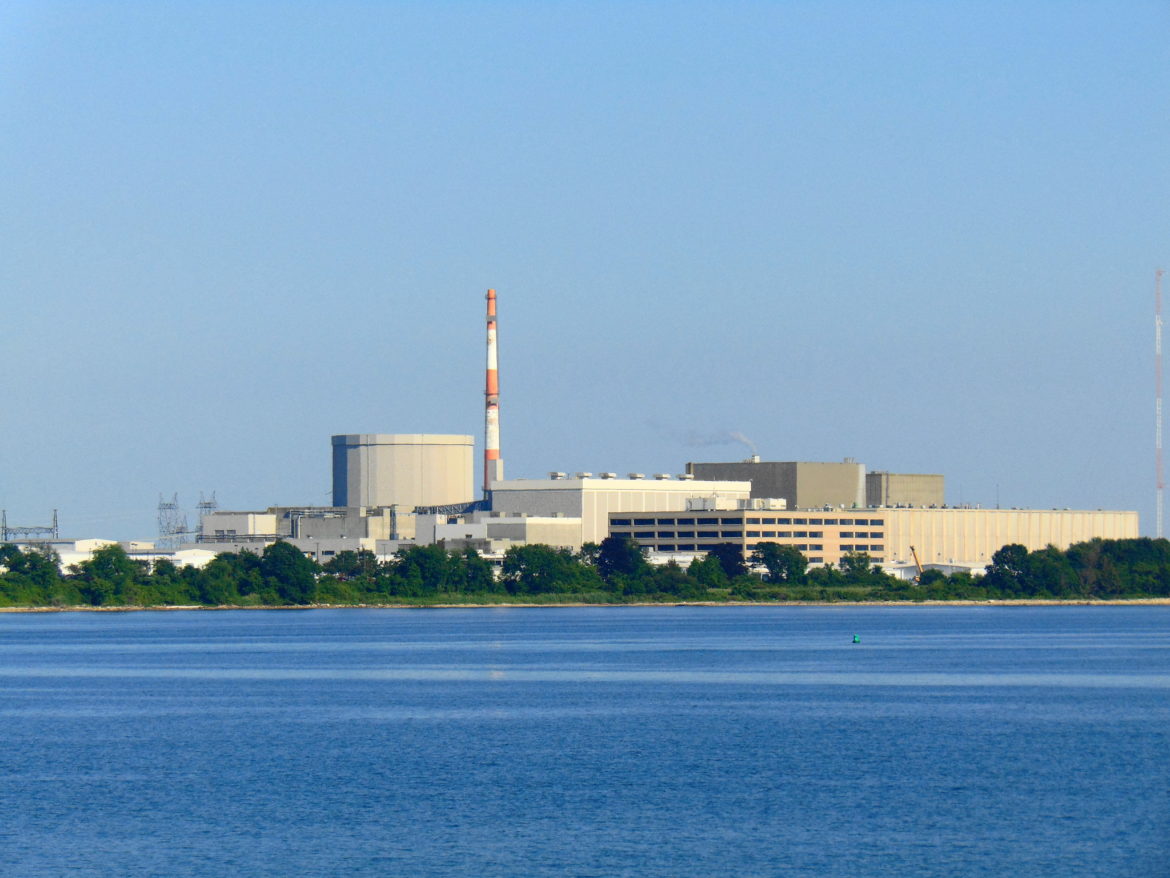 State energy officials conclude that eliminating emissions in two decades is feasible and affordable, but it will require changes from grid operator ISO New England.

Getting Connecticut to a zero-carbon electric supply is attainable by 2040, but it will require significant regional reforms, according to a new assessment of the state’s future energy needs.

“But the good news is the target is affordable and feasible to achieve,” said department Commissioner Katie Dykes in an interview.

The Department of Energy and Environmental Protection is statutorily required to prepare the integrated resources plan every two years. This year’s plan marks the first attempt to lay out a blueprint for achieving a 100% zero-carbon electric supply.

The report notes that Connecticut has already made considerable progress toward that goal. Long-term contracts for zero-emission renewables and zero-carbon nuclear resources account for nearly 65% of the power consumed by customers of Eversource and United Illuminating, the state’s two largest utilities.

That percentage is expected to rise to 91% by 2025, as offshore wind and grid-scale solar projects scheduled for construction come online.

In the meantime, Dykes said, “we have to look at turning our wholesale electricity markets into engines of decarbonization, and ensure that our grid is prepared to effectively integrate distributed energy resources and storage and demand efficiency.”

The Lamont administration will be prioritizing work on those reforms over the next few months, she said.

One result of those preferences is that Connecticut has become “a target” for the development of natural gas-fired power plants — aided by the availability of infrastructure — and now hosts a disproportionate share of that and other fossil-fired generation, Dykes said.

Discussions around how to reform the wholesale markets began moving forward this week, with the New England States Committee on Electricity hosting a virtual technical meeting on market design. An ISO New England representative was scheduled to make a presentation.

“We are hopeful that through this process we can find new ways of working together,” Dykes said.

The agency recently released straw proposals for establishing the state’s first energy storage program and for the strategic deployment of electric vehicle infrastructure.

The draft integrated resources plan models a range of scenarios for reaching 100% zero-carbon electricity by 2040. It emphasizes that the Millstone nuclear facility plays an “outsized role” in those pathways to decarbonization.

Last year, Connecticut entered into a 10-year contract with Millstone for 9 million megawatt-hours of energy, or about 36% of the utilities’ load, after Millstone’s owner, Dominion Energy, warned of the facility’s potential closure. State agencies concluded that such a closure would threaten the state’s energy security.

Some of the draft plan’s model pathways assume that Millstone will be retired when that contract ends in 2029, which will require significant procurements of new renewable builds.

Other models test the possibility of Millstone’s continued operation through 2040, a scenario that allows the state to hit the zero-carbon goal at a lower cost. That’s because keeping the facility generating would reduce the need for new resources early on to replace the nuclear power. It would also allow more fossil-generated facilities to retire in the interim.

However, the plan says, if Millstone were to continue operating beyond 2029, Connecticut ratepayers should not be the ones to bear the full financial burden again. Rather, the facility “should be supported regionally through a reformed ISO-NE wholesale market, or by some other regional mechanism.”

Another factor that will significantly impact the timing of procurement of new renewable resources is the rate of electrification of the building and transportation sectors.

The report also notes the importance of continuing with the state’s energy efficiency programs in order to help drive down demand, thereby reducing the need for new supply. Those programs, which are funded through a ratepayer surcharge and administered by the utilities, are just getting back up to speed after state lawmakers raided the funds several years ago to help resolve budget problems.

As the state once again faces a difficult economic landscape, due to the pandemic, Dykes said she thinks the funds are safer this time.

“During the pandemic, as we’ve seen households being impacted, people working at home and consuming more electricity — energy efficiency programs have been one of the most impactful solutions that ratepayers have been able to access to lower energy use and costs,” she said. “Awareness of their value, in terms of reducing emissions, creating jobs, and lowering bills, has never been more widely recognized.”The Department of Energy and Environmental Protection is holding virtual public hearings on the draft plan on Thursday, Jan. 14, as well as two technical meetings later in the month. Public comments may be submitted to DEEP.EnergyBureau@ct.gov through Feb. 15.

Lisa Prevost is a longtime journalist based in Connecticut. She writes regularly about housing, development and business for the New York Times. Her work has also appeared in the Boston Globe, CNBC.com, Next City and many other publications. She is the author of “Snob Zones: Fear, Prejudice and Real Estate.” A native New Englander, Lisa covers Connecticut and Rhode Island.

‘This won’t be free.’ Rhode Island maps path to 100% renewables

E&E News | Miranda Willson Rhode Island’s goal of reaching 100% renewable electricity by 2030 is achievable but potentially costly, according to a new report from state officials. The state’s use of renewable power will need to increase 150% over the next decade to meet the all-renewables target established by Gov. Gina Raimondo (D) last year, said the report from the Rhode Island Office of Energy Resources and Boston-based consulting firm the Brattle Group.

Rhode Island’s timeline is more ambitious than those of many other states with 100% renewable goals, which typically have targets of 2040 or later. As of 2019, Rhode Island generated 91% of its electricity from natural gas, a larger share than any other state, according to the U.S. Energy Information Administration. The rapid deployment of offshore and onshore wind as well as solar resources could enable Rhode Island to become the first state to reach all-renewable power, but electricity rates will be affected by the shift, the report said. Residential electricity bills in 2030 could increase by an additional $11 to $14 per month if the state uses utility-scale solar and wind to meet its goal, or by an extra $30 per month if retail rooftop solar is used.

“This won’t be free,” said Dean Murphy, a principal at the Brattle Group and a co-author of the report. “But it’s ambitious and entirely doable, and it just takes a state like Rhode Island to step up and do it.”

The report outlines recommendations to meet the goal, including amending the state’s existing renewable portfolio standard of 38.5% renewables by 2035. Currently, Rhode Island’s 2030 target is not codified into law, but lawmakers could move to do so, said Nicholas Ucci, state energy commissioner.

PROVIDENCE, R.I. (AP) — Achieving Rhode Island’s goal of using 100% renewable energy by 2030 is possible, a state report said, but it will require the ongoing construction of renewable energy projects as transportation and heating transition to electric power.

The report released Wednesday from the state’s Office of Energy Resources was produced by The Brattle Group. The consulting firm described the production capacity needed and the estimated costs required to reach the ambitious clean energy goal.

Gov. Gina Raimondo signed an executive order last year making 2030 the target date for the state to completely transition to renewable energy sources. It directed the state to study and develop ways to achieve that goal, the state’s Office of Energy Resources said in a statement.

The state’s Renewable Energy Standard actually sets standards for the percentage of renewable energy supplied in the state, the Providence Journal reported.

An offshore wind farm that is waiting for federal approval would provide a large portion of the required clean energy, and another proposed offshore windfarm would make up another major portion, the newspaper reported. The remaining clean energy production would come from various solar installations and the purchase of renewable energy certificates.

Copyright 2021 The Associated Press. All rights reserved. This material may not be published, broadcast, rewritten or redistributed without permission.

The Covid-19 crisis collapsed demand for energy, with oil prices falling to an astonishing -$37.63 per barrel in late April. But as the world looks toward recovery, can this shock be seized to break the global addiction to fossil fuels, or will the “new normal” end up looking much like the old one? How can we accelerate the rise in renewables to meet urgent global demand throughout the recovery? How will businesses with global operations adapt to support this transformation? And could a green recovery provide the necessary boost to strengthen commitment to the climate goals, which the world so badly needs?