Stafford Act, 1988 legislation that requires all infrastructure funded with FEMA money to be rebuilt more or less as it had been before the storm. That means if an inefficient, old oil-burning power station is destroyed in a storm and you want to use FEMA funds to rebuild it, you have to build another oil burner.

The scale of the housing crisis after Maria is still visible as you fly into San Juan and see the ocean of blue tarps from the air. Hurricane Maria destroyed at least 70,000 homes and damaged another 300,000. There are no hard numbers on how many of those have been repaired, but anyone who spends a few hours outside San Juan can see that many homes are still in bad shape. Roofs are gone, windows are missing, foundations are tilted. Many of them will never be rebuilt because they were “informal” — that is, illegal, built without the proper title or permits — and thus did not qualify for FEMA funding. As much as half the housing in Puerto Rico fits into this category, and one of the laudable goals of the rebuilding effort is to shift people into better-built, legally sound housing.

To help with this, the U.S. Department of Housing and Urban Development has awarded Puerto Rico $18.5 billion in housing grants. Ricardo Alvarez-Díaz, a prominent Puerto Rican architect, estimates that 70,000 new homes will be built in Puerto Rico over the next few years. “The challenge,” says Alvarez-Díaz, sitting in a San Juan cafe late one night, “will be designing this new housing so that it strengthens communities rather than destroys them.” He mentions the shoe memorial at the capitol, which had moved him deeply. “If we do this right, it’s a way of respect for the dead. A way of showing their death is not meaningless.”

I mention my visit to Utuado and all the empty homes there. “You are going to see a big shift in where people live,” he predicts. “Certain remote areas like that — well, they’re not going to be rebuilt. You’re going to see more people moving into the cities, where a whole new generation of housing is going to be built.”

Alvarez-Díaz invites me to an open house the next day for a new development called the Bayshore Villas, located near the water in an industrial area of San Juan, which he says is representative of the kind of housing he hopes to see in Puerto Rico in coming years. When I arrive the following day, I discover that the villas look a lot like a middle-class condo development you might find in Atlanta or Phoenix: 174 units in a dozen separate buildings with courtyards, small balconies and commercial space. Its buildings are all made of concrete, designed to withstand even the most brutal storms. But what’s really new, Alvarez-Díaz had explained the night before, is that the development was built through a public-private partnership, allowing about 80 percent of the units to be devoted to government-subsidized housing, while the rest are rented at market rate, which ranges from $800 for a three-bedroom apartment to $370 for a one-bedroom.

In a world with so much wreckage and despair, even a new condo development can be cause for celebration. That morning, dignitaries like Fernando Gil Enseñat, Puerto Rico’s secretary of housing, gathered in a courtyard to mark the occasion. (Gov. Rosselló was supposed to be there too, but he canceled at the last minute.) I wandered into one of the model units to have a look, and it felt like I was stepping into a Pottery Barn showroom. It -reminded me of the Home Depots and Best Buys that I had seen driving over that morning, islands of middle-class aspiration in the new Puerto Rico. If you have a good job, you can live in a storm-proof concrete apartment by the water and not worry too much about what Mother Nature might throw your way.

But what if you don’t have a good job? What if you’re one of the tens of thousands of Puerto Ricans whose house was blown down in the storm and who doesn’t have the money to fix it? What if you believe, as many Puerto Ricans do, that the game is rigged against you, that you will never be given the full rights of U.S. citizenship? What if living in a Pottery Barn catalog is not your idea of the good life? 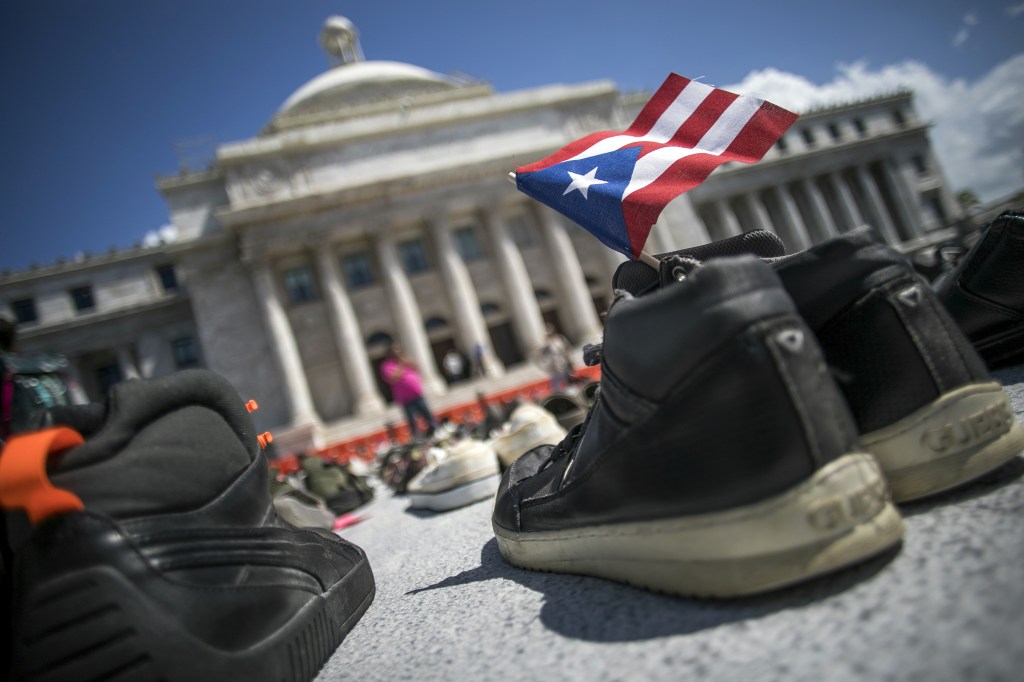 A Puerto Rican flag stands inside a pair of shoes displayed outside the Capitol building during a protest against the government’s reporting of the death toll from Hurricane Maria in San Juan, Puerto Rico, on Friday, June 1st, 2018. Photo credit: Xavier Garcia/Bloomberg/Getty Images

This year, the annual May Day parade in San Juan began peacefully enough. People marched down Ponce de León Avenue, known as the Golden Mile, through the heart of the island’s financial district, carrying signs of protest against health care cuts and tuition increases. Some wore T-shirts or carried placards painted with black Puerto Rican flags, a symbol of resistance. Near the end of the march, protesters clashed with police in riot gear. Chaos erupted. Protesters threw rocks, and the police launched tear-gas canisters into the crowd. After a few minutes of scuffling, people dispersed. But as Carlos Cofiño, a 20-year-old college student at the University of Puerto Rico who was there to protest tuition increases, told a journalist covering the march, “We’re on a downward spiral.”

Among the faces in the crowd that day was Oscar Lopez Rivera, who laid low and kept his distance from the police. Rivera is one of the most controversial figures on the island — he is seen by some as the Nelson Mandela of Puerto Rico, a man who has suffered years of political persecution as a result of his belief in justice and independence for Puerto Rico. To others, he is nothing more than “a fucking terrorist,” as one prominent Puerto Rican described him to me, a man who has killed innocent people in pursuit of his own political ideology.

What no one disputes is that in the 1970s Rivera was one of the leaders of the Fuerzas Armadas de Liberación -Nacional Puertorriqueña (FALN), a clandestine paramilitary organization devoted to Puerto Rican independence that carried out more than 130 bomb attacks in the U.S. and -Puerto Rico between 1974 and 1983. The most deadly attack occurred on January 24th, 1975, when a duffel bag stuffed with sticks of dynamite exploded in Fraunces Tavern in Lower Manhattan, killing four people. Rivera spent five years on the run, then was finally arrested in 1981 and tried and convicted of seditious conspiracy, interstate transportation of firearms with the intent to commit violent crimes, and transportation of explosives with intent to kill and injure people and destroy government property. He was sentenced to 55 years in federal prison. In 2017, President Obama commuted his sentence and Rivera was released. By that time, he had spent 35 years in prison, including 12 years in solitary confinement.

Today, Rivera doesn’t look much like an ex-con. He lives in a 1950s-style apartment complex in an anonymous neighborhood of San Juan and spends most of his day in a small office near the university that is decorated with a Puerto Rican flag and a small black-and-white photo of Fidel Castro and Nelson Mandela standing together. When I meet him, I am struck by how small and slight he is. Dressed in jeans, a T-shirt and orange Nikes, he looks more like a retired mailman than a notorious terrorist. He has gray hair and a gray mustache, and his voice is smooth and quiet. But there’s a fierceness in how he talks about things, especially Puerto Rican history and the long legacy of colonialism. “Puerto Ricans have been exploited by the United States for more than 100 years,” he says bluntly. “What’s happened since Hurricane Maria is just more of the same. You talk about rebuilding? There is no rebuilding. At least, not for most Puerto Ricans.”

Rivera goes on from there. He believes that the Puerto Rican government is not really a government at all, but an extension of U.S. rule. He believes that the result of this will be to depopulate the island, push out the poor people and make it a paradise for yacht owners and blockchain billionaires. “We need to invest in the poor communities, in the poorest of the poor, and educate them about what is going on,” he tells me. “And we need to start asking some fundamental questions about how we live. Can we accept climate change? Can we accept a world powered by coal and oil and the Koch brothers? Is that the kind of world we want to live in?”

For Rivera, these questions all lead in the same direction: toward Puerto Rican independence from the U.S. It is not a view that many share, at least not right now. It’s achieving statehood, not independence, that inspires most people on the island, including Rosselló, who made it an explicit goal of his 2016 campaign. “I think that it is the right time for the U.S. to eradicate this notion of second-class citizenship, which is a real problem for American democracy,” Rosselló told me.

It is hard to imagine Puerto Ricans rising up en masse and marching in the streets when it’s so much easier and more practical to express your disgust with the way the island is being run by moving to Orlando. After Maria, more than 300,000 people left Puerto Rico for Florida, accelerating a decline in the island’s population that began with the economic crisis more than a decade ago and that will undoubtedly continue until the economy revives.

Rivera, however, hopes to inspire Puerto Ricans to stick around and fight.

“I have something I want to show you,” he says. I follow him into another room. He opens a long, narrow case and takes out a sword. It has elaborate engravings on the handle and blade. “This is a replica of Símon Bolívar’s sword,” he tells me. Bolívar was a 19th-century military leader and politician who is revered as El Liberator for freeing much of South America from Spanish rule. I ask him if he is angry about what has happened to Puerto Rico. “I’m not angry, I want changes,” he says. He holds up the sword, and I see a flash of the old revolutionary in him. “Anything I can do to make the world a more just place, I will do.”

But as Rivera knows as well as anyone, one year after the storm, Puerto Rico remains an island lost at sea. The economy will be pumped up by billions of dollars in recovery funds over the next few years, but after that? The path to statehood is likely to be long and steep. You can spin out various possible futures for the island: In one version, disaster capitalists and bitcoin entrepreneurs arrive in their yachts and private jets, turning Puerto Rico into a crypto St. Barts; in another, post-capitalists build a paradise powered by solar microgrids, community gardens and the rebirth of local fisheries; in a third, the territory falls into a dystopian ruin, where everyone with brains and ambition has fled to the mainland, leaving behind an aging, unhealthy population in slow but inexorable decline. But one thing that’s clear is that in the age of accelerating climate change, what’s most vulnerable is not ice sheets and coral reefs. It’s our human-built world. As Puerto Rico demonstrates, one big storm can blow the whole thing down.