The deadliest wildfires in state history have raised questions about whether a repeat culprit might again be to blame for starting or spreading at least some of the Northern California blazes: utility companies and their equipment.

The explosive failure of power lines and other electrical equipment has regularly ranked among the top three singular sources of California wildfires for the last several years. In 2015, the last year of reported data, electrical power problems sparked the burning of 149,241 acres — more than twice the amount from any other cause.

Investigators have yet to determine what sparked the Northern California fires.

But a review of emergency radio traffic recordings found that fire crews were dispatched to at least 10 spots in Sonoma County in response to reports of sparking electrical wires and exploding transformers as high winds pummeled the area on the night of Oct. 8, the San Jose Mercury News reported. The first fires were reported about the same time, the newspaper said. 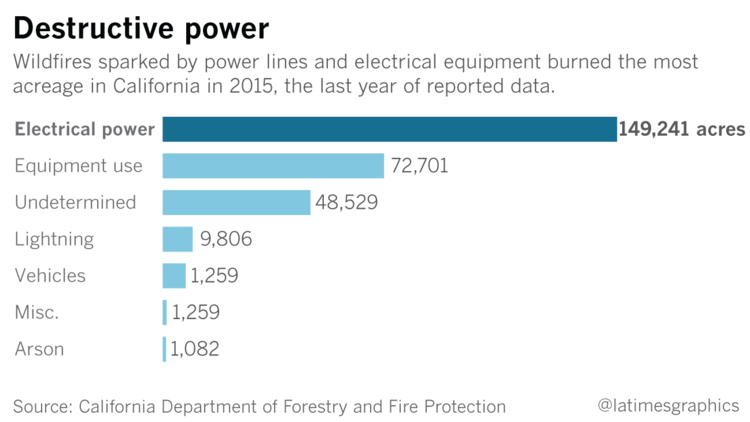 The electrical lines and equipment are owned by Pacific Gas & Electric Co. Spokeswoman Jennifer Robison said the San Francisco utility is focusing on ensuring the safety of those affected by the fires, rather than engaging in debate over the cause before investigators complete their work.

“There will likely be reviews of these wildfires by the appropriate agencies, but right now we are focused on life safety and service restoration,” Robison said.

Even the speculation that PG&E might be liable has sent its parent company’s stock tumbling.

Utility critics blame lax regulation and enforcement for the continuing problem of wildfires caused by power equipment failures. They point to Gov. Jerry Brown’s decision last year to veto legislation that would have required the California Public Utilities Commission and the state Department of Forestry and Fire Protection, or Cal Fire, to identify steps that cities must take to prevent fires from overhead electrical equipment.  “It takes a catastrophe like this to show how bad the problem is,” said Jamie Court, president of advocacy organization Consumer Watchdog. “We’ve seen no comprehensive attempts to change the system because it’s costly.”

Mindy Spatt, a spokeswoman for the Utility Reform Network, said her organization has argued at the California Public Utilities Commission for years that the power companies need to give more attention to their equipment, such as ensuring trees are trimmed around power lines to prevent disasters.

“One question in this case may be whether PG&E properly assessed and responded to the increased risk,” Spatt said.

Cal Fire spokeswoman Lynne Tolmachoff said it is too early to blame PG&E when the cause remains undetermined.

“None of it’s clear right now,” Tolmachoff said. “They’re doing their due diligence, making sure the investigation is very thorough.

“There’s not a quick easy way to determine the cause,” she said. “After every fire like this, there’s all kinds of speculation.”

To Court and others, the utilities, regulators and government leaders need to do more to ensure public safety, such as ensuring that utility companies are properly managing trees and brush around electrical equipment and maintaining and reinforcing equipment to guard against hazardous conditions.

For example, when red flag warnings are in place and circuits in high fire areas trip, Edison requires a patrol to inspect lines before they are re-energized.

SDG&E said it has made significant investments in fire preparedness over the last several years and has modernized infrastructure throughout its service area. That includes replacing thousands of wooden poles with fire-resistant steel poles to reduce the risk of damage to power lines in fire-prone areas.

The utility also developed and operates the nation’s largest utility-owned weather network, with models that provide a fire potential rating, giving a team of meteorologists and local fire agencies valuable information to help develop response strategies in advance of an emergency.

In 2013, SCE launched a comprehensive pole load assessment and replacement program to ensure that its 1.4 million poles are strong enough to withstand high winds based on accurate information on attachments from all utilities, including electric, phone, cable television, internet and wireless equipment.

This included a thorough meteorological study to update the potential highest wind speeds in every part of the service territory. The assessments were prioritized to address high fire areas first, and these areas will be completed by the end of this year. The remaining poles will be assessed by 2021.

Power poles and lines block a street at Brookdale and Aaron Drive in Hidden Valley, where most of the homes were destroyed by fire in Santa Rosa. (Brian van der Brug / Los Angeles Times)

Elizaveta Malashenko, director of the PUC’s safety and enforcement division, said the concern about fire safety has prompted more funding and personnel for her office.

Malashenko’s division had been operating with about 10 investigators who, in total, reviewed an average of 120 incidents a year of potential violations by various types of utilities, not just electrical. Now her office is in the process of increasing to about 36 staff members, with two dedicated to fire safety.

“We do need to grow our capacity in the area of fire prevention,” Malashenko said. “I think in an area like this, you can never say that you’ve done enough.”

There are some limitations to strengthening the electrical system against disasters such as wildfires, said Ted Kury, director of energy studies at the University of Florida’s Public Utility Research Center.

Kury said utilities could use concrete or metal poles instead of wooden ones but flying debris in a wind storm could still strike a wire and cause it to break loose and ignite a fire.

Underground wires also are an option, but every improvement comes with a cost, he said. And depending on the geography in a particular location — which is the primary factor in cost — underground power lines can range from $200,000 to $300,000 a mile. Kury has seen an extreme case that cost as much as $9 million a mile.

“Make no mistake, it’s the customers that spend the money,” Kury said. “Utilities don’t have money. Government doesn’t have money. They get their money from the people.”

Ultimately, Kury said, each area has to determine what is workable for the terrain and resources available based on reviews by regulators.

“When regulators are typically taking a look at this question, they have a statutory duty — all regulators, and this includes the California commission. The basic idea behind it is safe and reliable service at just and reasonable rates.”

He wouldn’t evacuate, then used Facebook Live to broadcast firestorm in his hometown

2:05 p.m.: This article was updated with Tuesday’s stock gain.

This article was originally published at 5 a.m.

FROM AROUND THE WEB

Hollywood Actress Tells All: “I Hope My Story Will Help Other Women”ActivatedYou

Detroit Is All But Dead. Here’s What Comes NextBonner and Partners

The Highest Paying Cash Back Card Has Just Hit The MarketCredit.com