Democrats should present voters with a material choice between a party that has nothing to offer the majority of Americans and a party committed to building a democracy and an economy that work for all.

Osita Nwanevu February 5, 2021 The New Republic: The Democratic Party Has a Fatal Misunderstanding of the QAnon Phenomenon: Their belief that this surreal conspiracy has arisen because of the poor education of its adherents is based in classism, not reality. 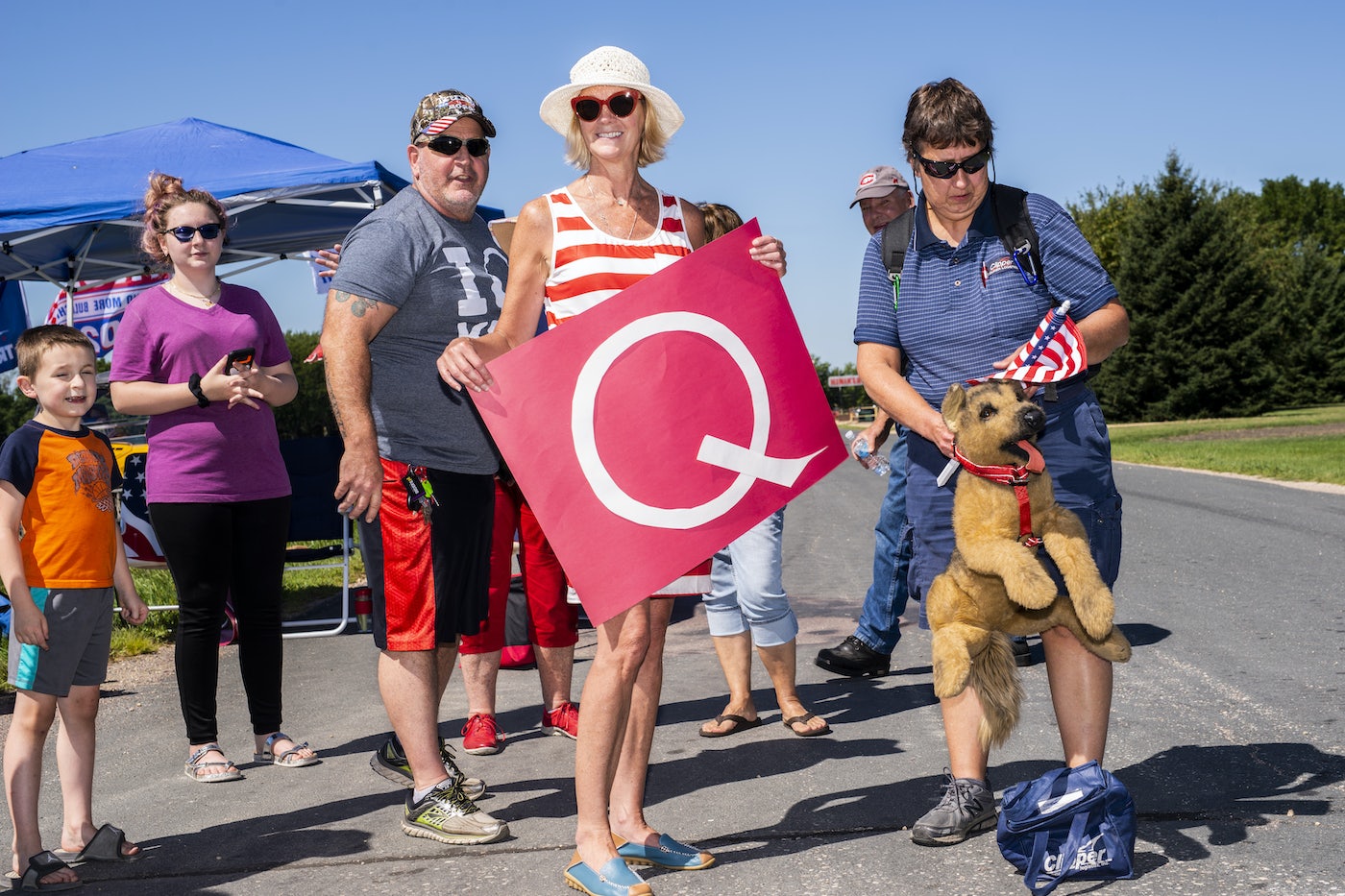 On Thursday, the House voted to strip Georgia Congresswoman Marjorie Taylor Greene of her committee assignments, putting an end to one chapter of what’s sure to be an ongoing saga in the chamber’s Republican caucus. In a meandering nonapology in the hours before the vote, Greene, who has endorsed an impressive array of conspiracy theories, including QAnon and claims that Hillary Clinton had raped, mutilated, and consumed the blood of a child, characterized negative coverage of her as—surprise, surprise—more “cancel culture” run amok. While Greene’s rise bodes poorly for the country, some have already decided her newfound celebrity is good news for the Democratic Party’s electoral prospects. On Tuesday, Politico reported that the Democratic Congressional Campaign Committee intends to focus on QAnon in its messaging, ahead of the 2022 midterms, in the hopes that the specter of more Greenes in Congress will push more people away from the GOP. “They can do QAnon, or they can do college-educated voters,” DCCC Chair Sean Patrick Maloney said. “They cannot do both.”

Actually, they can. Trying to tether the GOP more tightly to the extremism it’s cultivated makes sense, and the strategy may help prevent some moderate suburbanites from returning to the party’s inordinately big tent. But polls have shown few differences on QAnon between voters with and without college degrees—Civiqs’s latest survey, for instance, registers 72 percent opposition and 5 percent support for the theory among graduates. The split is 71 to 5 among nongraduates and 78 to 3 among postgraduates. And, notably, Americans without college degrees are less likely than graduates to have heard of QAnon in the first place. If this is a surprise, consider the fact that Greene herself went to college. And when she runs for reelection next year, she’s sure to enjoy the support of many college-educated Republicans who, whether they personally believe in QAnon or not, want to keep as many right-wing firebrands as they can in Congress. Those who think such voters will inevitably doom the party would do well to remember the 2010 midterms—despite the Tea Party’s rhetoric and antics, Republicans took the House in a historic wave.

Of all the “big lies” distorting our politics, one of the largest and most popular—back in 2010 and now—has been the notion that our political divisions are the product of under- or miseducation. The Republican Party’s flight into lunacy, it’s often suggested, has a fairly simple cause. The unwashed aren’t getting The Facts in school or from their media sources, and it’s up to the enlightened to shower The Facts upon them—perhaps, as some “disinformation” experts recently suggested to The New York Times, with a “reality czar” at the White House manning the hose. This was the explanation many turned to as the Trump era began, and it was the explanation many turned to for how it ended. Take the remarkable lede that topped a piece from The Atlantic’s Caitlin Flanagan on the Capitol rioters last month:

This week, The Atlantic published what amounted to a rebuttal. According to court records and media coverage reviewed by the University of Chicago’s Robert Pape and the Chicago Project on Security and Threats’ Keven Ruby, a full 40 percent of the 193 people charged with breaking into the Capitol grounds were business owners or white-collar workers. “Unlike the stereotypical extremist, many of the alleged participants in the Capitol riot have a lot to lose,” they wrote. “They work as CEOs, shop owners, doctors, lawyers, IT specialists, and accountants.”

There were plenty of graduates and good students in the mob that day. Plenty of dropouts and poor students looked on in horror. And as much as the right’s critics might prefer an understanding of what’s happened to our politics that flatters their intelligence, the challenge we’re facing isn’t that millions of hapless and benighted yokels have been bamboozled by disinformation. It’s that millions of otherwise ordinary people from many walks of life—including many who went to and even excelled in college—have a material or ideological interest in keeping the Democratic Party and its voters from power by any means possible. And those means include the utilization of narratives, including conspiracy theories, that delegitimize Democrats and offer hope of their eventual comeuppance.

Those theories are being fueled by politically motivated reasoning, and the literature on this is now fairly vast. For a prescient paper published in the American Journal of Political Science just a month before the 2016 presidential election, the University of Minnesota’s Joanne Miller and Christina Farhart and Colorado State University’s Kyle Saunders conducted a survey examining support for conspiracy theories, including birtherism and 9/11 trutherism. In a result unsurprising to those who follow this research, they found that higher levels of political knowledge actually deepened the likelihood that conservatives with low trust in people and major institutions would endorse right-wing conspiracy theories. In a section reviewing previous research on the subject, the authors explained that political sophisticates “have the ability to make connections between abstract principles and more concrete attitudes and are therefore more fully able to notice the implications of specific attitudes for their worldviews.” “Because politically knowledgeable people care more about politics and hold stronger political attitudes,” they added, “they are especially likely to want to protect those attitudes.”

This dynamic is now well established across multiple issue areas. Studies have suggested, for example, that higher levels of political knowledge, scientific knowledge, and quantitative skill can actually deepen disagreements about climate change and gun control. And research published by Harvard’s Kennedy School last spring found no correlation between educational attainment and beliefs in conspiracy theories about the coronavirus pandemic—indicating, the authors wrote, that the beliefs were “not merely the product of deficient health education” and had been fed by “psychological and political motivations.” The popularity of the idea that simple ignorance lies at the heart of all this may itself be proof of the phenomenon these studies point to: Many people will believe what they want to believe in spite of available data and evidence.

There isn’t much to be done about any of this: We won’t do away with motivated reasoning without wholly reinventing human beings; we can’t contain the spread of disinformation without wholly reinventing the internet and the media as we know them. And while the second task would be easier than the first, it doesn’t seem much more likely. Doing something about the power of the Republican Party seems more plausible—as long as those fighting it frame the battle as right against wrong rather than smart against dumb.

Democrats should try campaigning on the truth: The Republican Party is controlled by intelligent, college-educated, and affluent elites who concoct dangerous nonsense to paper over a bigoted, plutocratic agenda and to justify attacks on the democratic process. That agenda and those attacks are supported by millions of reasonably intelligent voters who will believe or claim to believe anything that furthers the objective of keeping conservatives in control of this country forever. Simply pointing to figures like Greene and hoping the indignation of college graduates will do the rest is a mistake.

Instead, Democrats should present voters with a material choice between a party that has nothing to offer the majority of Americans but abuse and conspiratorial flimflam and a party committed to building a democracy and an economy that work for all. If they don’t, the lizard people who run the GOP will be running the government again in no time.

Osita Nwanevu is a staff writer at The New Republic.