Yeb Sano, Filipino priests, lay people and Filipino NGOs have filed what is considered the first human rights complaint against “big polluters” – 50 multinational companies that are among the largest emitters of greenhouse gases.  The 40-page petition, signed by 13 environmental groups and 20 individuals, wants the Commission on Human Rights (CHR) to investigate so-called “Carbon Majors” for human rights violations resulting from impacts of climate change.
The petition names 50 “Carbon Majors” as respondents and cites a study by scientist Richard Heede holding accountable 90 of the world’s largest fossil fuel companies and cement producers.

CHR Chair Chito Gascon and Commissioner Karen Dumpit received the complaint after the civil society groups trooped from Philcoa to the CHR office in Quezon City.

(We will devote time for this and will coordinate with you and other stakeholders so we can properly analyze the issue of climate change and its relation to human rights, which is, as I said, unique and new to the Commission on Human Rights.)

Gascon said the CHR may hold a public inquiry, which involves consulting all stakeholders, as well as experts.

He also said the CHR is well aware of the effects of climate change in the Philippines.

“Of course it’s a human rights concern because it affects our livelihood,” Dumpit added, explaining that communities by the shore are among those experiencing the effects of climate change.

“It’s easy to imagine how human rights are affected because of climate change and we have to do something right now. But having said that, this is a petition before us, we will review it and will let you know of the next steps and our recommendations arising from it,” she said. 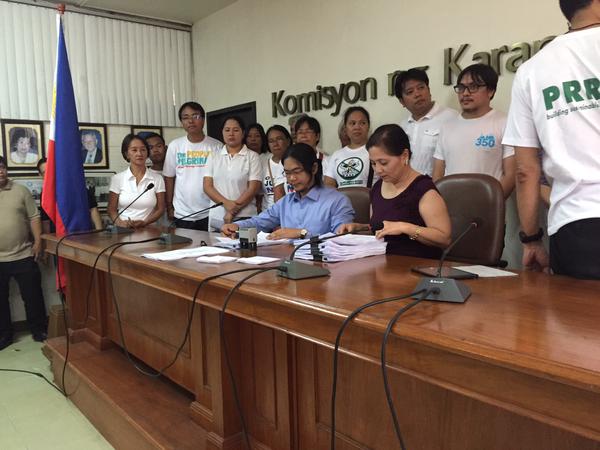 Carbon Majors is the title of the study by Heede, which traced “anthropogenic” or human-caused carbon dioxide (CO2) emissions from 1751 to 2010.

The study showed that 50 investor-owned companies have contributed 315 gigatons (Gt) of equivalent carbon dioxide (CO2e) or 21.72 percent of global industrial emissions. Meanwhile, it discovered that half of the world’s greenhouse gas emissions occurred since 1986. Greenpeace said it demonstrated “the increasing speed with which fossil fuels are being burned.”

Greenpeace said they chose to file the case before the CHR because the agency has the power to investigate complaints on all forms of human rights, including political and civil rights.

“Climate change interferes with the enjoyment of our fundamental rights as human beings. Hence, we demand accountability of those contributing to climate change,” the groups said in the petition.

Zelda Soriano, one of the legal representatives of the group, said the potential landmark case could set a precedent in the climate liability movement.

“According to Carbon Majors data, there are only 90 companies and entities whose actions have made a measurable, demonstrable and cumulative contribution to climate change. Yet, none of them are being held accountable for the catastrophic human impacts of this contribution. The upcoming petition has the potential to change that,” she explained.

Heede’s study explains that the rapid rise of carbon dioxide has been caused big human activities such as deforestation “and more significantly, from the mining and combustion of geologic deposits of fossil fuels.”

Although many of the respondents are based overseas, Greenpeace, in its petition, said governments may act on “transboundary matters like climate change, where harmful activity is taking place in one country, and the negative impacts are being suffered in another.”

It also cited the Guiding Principles on Business and Human Rights, which states that corporations have a responsibility to respect human rights based on a “global standard of expected conduct applicable to all businesses in all situations.”

Meanwhile, Dumpit explained that the “CHR is a constitutional body tasked to investigate human rights violations but [they will be] drawing on several of [their] mandates including monitoring government compliance of human rights treaties.”

Soriano said Gascon’s and Dumpit’s responses were promising and that the groups hope there will be a “substantive move” before the 21st Conference of Parties (COP21) in Paris this December.

During the said climate negotiations, parties to the United Nations Framework Convention on Climate Change (UNFCCC) will seek to come up with a legally-binding agreement on climate change that will help limit the global temperature increase to two degrees Celsius above pre-industrial levels.

Soriano explained that the CHR’s findings might lead to a recommendation for the petitioners to file a court case against the Carbon Majors.

“All these petitioners are really serious in getting more information, collecting more data and considering very seriously other efforts aside from this human rights and climate change complaint,” she said.