A promising energy efficiency program could get closer to reaching its massive potential after a federal policy tweak that tempers lenders’ concerns to allow more homeowners to cash in.

Variations of the Property Assessed Clean Energy program, better known as PACE, already exist in more than 30 states. Until now, the program has skewed mainly toward commercial or municipal properties, bogged down by the mortgage industry’s notion that it would hurt lenders.

Despite enthusiasm for its residential upside during PACE’s ramp-up in 2008, some mortgage lenders balked at its guidelines. They said payments on PACE assessments would be prioritized before mortgage obligations and limit refinancing options, a perceived threat to their business.

But now, fresh guidance from the government ease some of the worry. Homes with PACE assessments in place can be refinanced or purchased with mortgage products backed by the Federal Housing Administration, effectively aligning PACE with other property tax assessments.

The new contours put PACE repayment obligations behind eligible mortgage loans. With foreclosed homes, for example, only delinquent PACE payments could come first — the entire PACE bill would not come due all at once, and would not override the mortgage debt.

As a financing mechanism, PACE boils down to this: With private financing and no money down, homeowners can cover 100 percent of improvements aimed at energy efficiency, renewable energy and water conservation.

Efficiency upgrade charges appear as opt-in assessments on the same property tax bills that homeowners already receive and pay. The costs and benefits of the improvements are tied to the property, carrying over to future owners in the event of a sale. 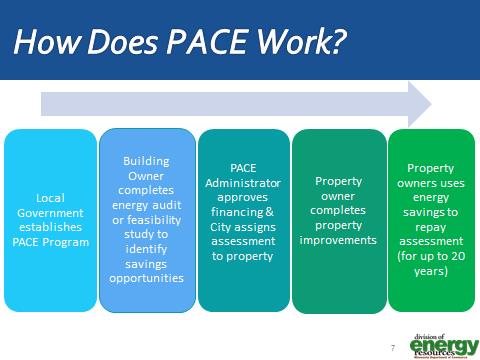 By design, the program knocks down a couple of the biggest barriers between homeowners and greener living.

First, because PACE is linked to the property and not the individual homeowner, it’s less risky. That’s doubly true considering the average American moves roughly every five years, a shorter duration than a typical loan term or the life of a standard energy retrofit.

Second, PACE provides a centralized source of information and financing. Cities themselves fill that role, setting up a streamlined process with the opportunity for localized outreach.

On Track for Growth

Market watchers predict the fine-tuned formula for PACE will drive an onslaught of new retrofits and green upgrades nationwide, as interest in efficiency ticks up and more people learn about the program.

The latest action doesn’t require the Federal Housing Finance Agency, a PACE detractor that oversees Fannie Mae and Freddie Mac, to change its tune. But this month’s vote of confidence from the Federal Housing Administration weaves PACE into federal housing policy, a powerful signal to local governments.

Among those who see steep upside in the guidance is Cisco DeVries, who spearheaded PACE in Berkeley, California, back in 2009, in the program’s early days.

“PACE is in fact just the example of state and local governments using taxation and assessment power to further the public good,” he said during a recent discussion about the program. “It looks and feels and is, in fact, very much identical to other taxes and assessments, and should be treated similarly.”

To date, the program has taken off most notably in California, where more than 400 local governments have to date welcomed upwards of 90,000 property owners to the program. That state, through a series of separate initiatives, has pioneered novel approaches to advance PACE. 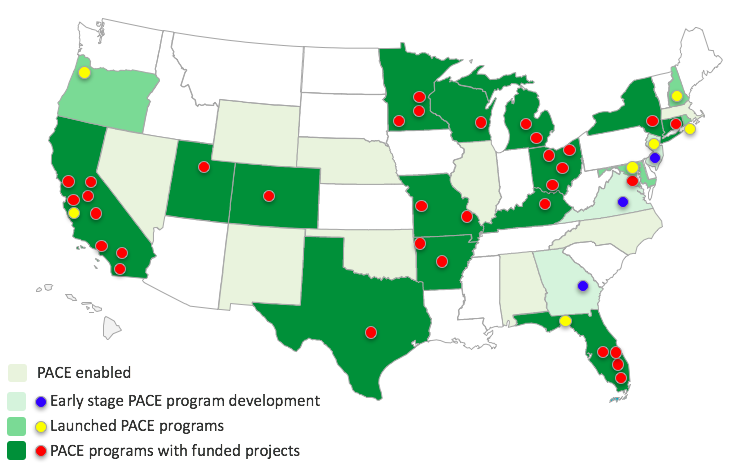 Down the line, experts anticipate other states will capitalize on the program’s potential in a similar way. They can piggyback on the government’s latest guidance to expand residential PACE, a boon to cities chasing efficiency goals.

“PACE is the solution that can be leveraged as an option in the marketplace to help homeowners achieve their goals but also help communities achieve theirs,” Ari Matusiak, executive vice president at residential PACE financing provider Renovate America, said in the discussion with DeVries.

The program, designed to boost local economies, carries distinct benefits. For starters, PACE improvements pumped up property values by as much as $8,882, according to a study by Urban Institute researchers based on data that compared pre-upgrade appraisals against selling prices.

In addition, the study shows PACE homes netted a premium of nearly $7,000 when purchased from foreclosure, the study, published earlier this year, showed. Plus, qualifying renovations recover more than 100 percent of their costs — well beyond the 58 percent to 66 percent yield generated by more traditional bathroom and kitchen remodels.

The new guidelines do more to validate PACE’s value proposition. That’s especially important after the snub from mortgage lenders stalled out participation in recent years, despite evidence that qualifying homeowners held up their end of the bargain.

Owners of energy-efficient homes were one-third less likely to default on their mortgages than owners of traditional homes. In fact, their default rate hovered below the 1 percent mark. The energy-saving upgrades, meanwhile, generated revenue for homeowners to repay their loans.

Federal officials said the residential PACE guidance is part of a bigger effort to make clean energy technology more accessible to all Americans. Getting lenders comfortable with the program is a major step toward parlaying widespread interest into meaningful results.