The system requires a smartphone equipped with NFC, or Near-Field Communication, hardware that lets it exchange information with the payment readers. The technology has become common in recent years, including on all iPhone models introduced since 2014.

To use the system, a rider would pull up the device’s mobile payment app, hold the phone near a reader and authenticate the payment, usually with a fingerprint or code. If successful, the screens on the reader and the phone will confirm the transaction.

Fare inspectors for the transit agencies now carry equipment to scan smartphones to check for a valid payment. 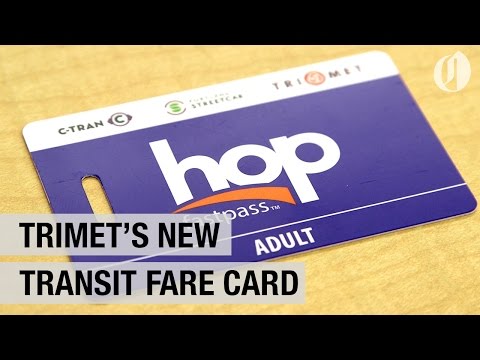 For the last few months, I’ve been using the new Hop Fastpass card for TriMet, C-Tran and the Portland Streetcar. I’ve found it to be a worthy replacement for my paper pass.

Unlike Hop electronic fare cards or the existing TriMet Tickets app, the mobile payment systems don’t require pre-loaded funds or pre-purchased fares. Instead, it charges a credit or debit card linked to the account.

But there are limitations. Because the mobile payments can’t be associated with an individual, they can only be used for full-priced adult fares.

And mobile-payment users won’t be able to take full advantage of fare-capping, one of the central features of the Hop Fastpass system.

Hop card users can “earn” a day pass or monthly pass and won’t pay extra for subsequent rides during that period. But while mobile-payment users won’t be charged more than $5 in a single day, frequent riders won’t be able to earn a monthly pass.

That’s because the payment systems don’t provide merchants with actual credit-card numbers, but rather a one-time authorization number that can’t be used to track an individual over the course of a month. riMet is on a mission to stamp out as much cash as possible from its system. It will take a major step next year with the launch of a $30 million electronic fare system.

The TriMet Tickets app, which allows users to buy and display passes on their smartphone, will continue to be available for at least another year under a contract between TriMet and Moovel, the app’s developer.

But the transit agency appears anxious to move its riders to its new fare system. An email sent to riders on Wednesday declared that “Hop is even easier” and “there’s a good reason for TriMet Tickets app users to make the switch.”

Moovel also created the Hop Fastpass app, as well as the app used by fare inspectors to check Hop cards and phones for payment.