New Project Aims to Finance Backyard Homes for Section 8 Tenants in Los Angeles By JARED BREY MAY 7, 2019. Next City 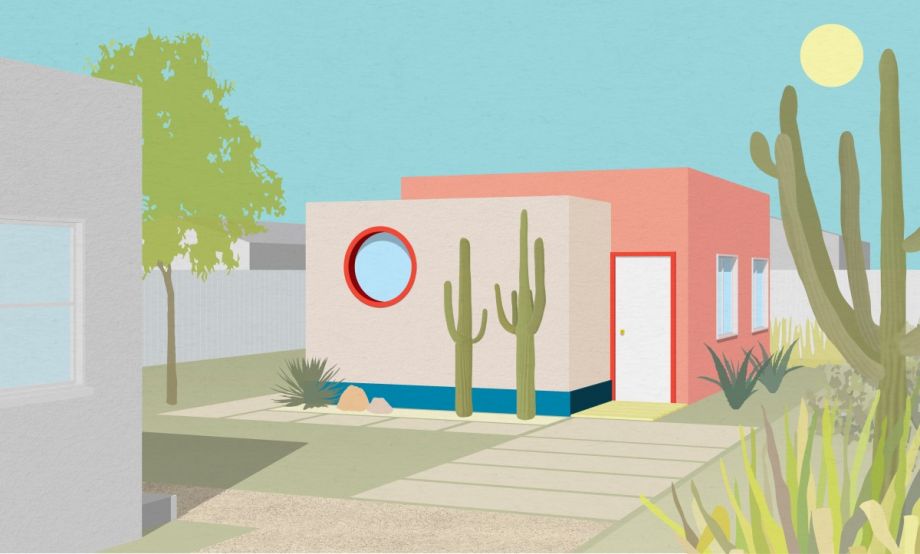 One of the renderings for a potential garage-to-ADU conversion that could be built under the new Backyard Homes project. (Rendering courtesy LA-Más)

In 2017, after California enacted a set of amendments making it easier for many homeowners to build accessory dwelling units, applications for those types of projects skyrocketed. And nowhere was the spike more dramatic than Los Angeles. From the end of 2016 to the end of 2017, after the new rules took effect, applications for ADUs (aka granny flats, aka backyard homes) in L.A. jumped from 80 to nearly 2,000, according to a reportfrom the Terner Center for Housing Innovation at UC Berkeley.

The spike suggested there was a “pent-up demand” from homeowners wanting to add units to their properties, as Next City wrote at the time. And clearly, in California, there’s a pent-up demand for low-cost housing as well. A new partnership in Los Angeles is looking to maximize the impact of the more permissive rules for ADUs by offering financing, design and construction services for homeowners who agree to rent their new units to Housing Choice Voucher holders for at least five years.

The effort, called the Backyard Homes Project, was coordinated by LA-Más, a nonprofit design group that works in low-income communities. The project provides participants with a range of designs for accessory dwelling units developed by LA-Más and connects them with partner organizations for construction and financing. It also helps them find voucher-holding tenants and requires training for new landlords from the L.A.-based Housing Rights Center.

Elizabeth Timme and Helen Leung, co-executive directors of LA-Más, say the Backyard Homes Project was inspired in part by a program in Portland that helped homeowners build ADUs for formerly homeless people. Timme and Leung spent a year researching why there wasn’t an affordable ADU program in L.A. and what it would take to create one that could be scaled up. The biggest issue they heard was that, even after the regulatory changes, the process of hiring an architect and getting an ADU permitted and built in a timely manner was still arduous and expensive.

On top of that, they say, potential landlords were wary of working with the Housing Authority of the City of Los Angeles because they sensed that it was overly bureaucratic, and some worried about leasing to tenants with vouchers. To help navigate those concerns, they partnered with LA Family Housing and the St. Joseph Center, which work with low-income and formerly homeless people, to match landlords with tenants.

Timme says LA-Más created seven designs for one- and two-bedroom ADUs, ranging from garage conversions to standalone buildings. They wanted to create designs that were “an alternative to the stucco box,” and that complement the “cultural fabric” of L.A. neighborhoods, Timme says.

“We see this, visually, as celebrating the diversity of Los Angeles,” she says.

Costs for homeowners start at $100,000 for a garage conversion and $115,000 for new construction. Homeowners who aren’t able to pay for the construction on their own can take advantage of financing help from two CDFIs working on the project — Genesis LA and Self-Help Federal Credit Union.

The spike in applications for ADU permits proves that there’s a large population of homeowners that is able to finance construction on their own, says Tom De Simone, president and CEO of Genesis LA. That perception was reinforced by the group’s experience with a pilot program launched by the City of Los Angeles in 2017, De Simone says.

“Through that process we learned pretty quickly that most of these ADUs are financed mostly by people who have enough liquid wealth or they have enough equity in their home [to get a construction loan],” De Simone says.

But homeowners who don’t have the cash on hand face a few barriers to getting financing to build these types of projects, he says. Homeowners without a lot of equity in their homes can’t put up enough collateral to get a large construction loan, De Simone says. Some homeowners also don’t have a high enough income get a larger loan, and banks are often unwilling to anticipate the rental income they’ll be collecting from the unit (around $2,000 a month for a two-bedroom, according to LA-Más) when reviewing the loan application.

As part of the Backyard Homes Project, Self-Help Credit Union will make new equity loans that consider three-quarters of the projected rental income from ADUs. The higher risk on those loans is offset by a loan guarantee funded through a $650,000 grant from JPMorgan Chase, Leung says. Once construction of the units are complete, the guarantee can be removed and revolved for another loan for another ADU, says De Simone. The project could show how the public sector could help provide more affordable ADUs without an ongoing cost.

“They don’t need to be subsidies, because these ADUs should support the debt service on a $150,000 loan,” De Simone says.

Leung and Timme asked potential ADU builders to apply for the new program. They received more than 130 applications in the first round, which closed at the beginning of May. They expected to approve 10-12 applicants in the first round based on which homeowners are best prepared to embark on the ADU-building process. (Also, as part of the deal, participants would be “expected to positively represent the team and to reflect the mission and values of this program.”)