In the summer of 2016, two high-profile investment advisors declared “The Sun Will Set on Electric Utilities” in a well-read Barron’s article.  Citing rising fixed costs and competition from energy storage and microgrids, Leonard Hyman and William Tilles predicted a “death spiral” for utilities where rising prices create ever-reinforcing incentives for customers to find cheaper power elsewhere.

But contrary facts and opinions surround the level of risk and disruption facing U.S. utilities.  Will the utility industry prove unable to adapt to decentralization, suffering the same fates as Kodak to the digital camera, PacBell to the cell phone, or Blockbuster to Netflix?  Certainly, new distributed energy technologies create significant risks on par with Hyman and Tilles’ prediction, but utility obsolescence is not a foregone conclusion.  Three major opportunities – rehashing utility regulation and business models, electric vehicles, and grid modernization – exist for utilities to disprove the death spiral forecast.

Have Rumors Of The Death Spiral Been Greatly Exaggerated? 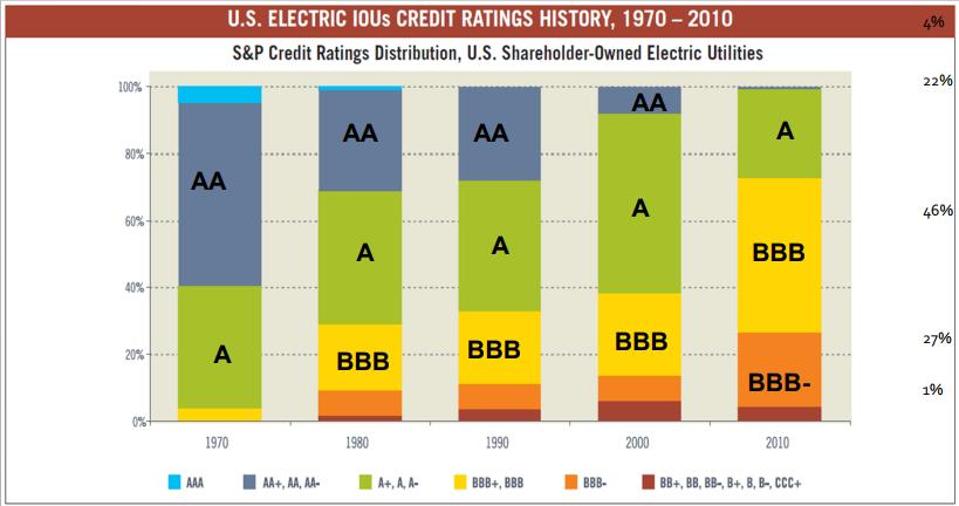 Electric utilities are also selling less power, while increasing capital asset investments that put upward pressure on electricity prices.  Retail electricity sales are down 1% since 2010, while annual investor-owned utility capital spending on distribution and transmission infrastructure has doubled since 2006 to $52.8 billion.

But in 2015, Mr. Kind outlined a robust set of solutions for the death spiral, calling for a transition to a “21st Century Utility” where utilities can pivot their business models and reinvent regulations to reward better service and lower costs.

Stock analysts seem to side with Kind and others who see electric utilities as growth opportunities rather than money pits – the stock index of investor-owned electric utilities rose 17.4% in 2016, beating the Dow Jones and S&P.  Perhaps utilities are perceived as riskier borrowing partners, but their shareholders’ returns aren’t slowing down.

Utilities Are Remaking Their Business Models

Though it’s happening at a relatively glacial pace due to the constraints of the regulatory process, U.S. utilities are actively remaking their century-old business model of one-way power delivery.

New York, California, and Illinois are furthest along here.

In these states, utilities become platforms that orchestrate the distribution system, while regulators consider new revenue streams rewarding optimization, rather than narrowly focusing on capital investment repatriation.  States like Ohio and Minnesota are following suit, and utilities who participate in remaking their business models can ensure they are rewarded for increasing efficiency and enabling more services to reach customers, pivoting from the century-old model that relied on ever-growing sales and asset investment.

State and federal policies are combining with rapid cost reductions to shift the transportation sector from oil to electricity.  Energy Innovation modeling forecasts EVs will compose 60%-75% of total new light-duty vehicle sales in the U.S. by 2050, representing 13%-15% of national electricity demand. 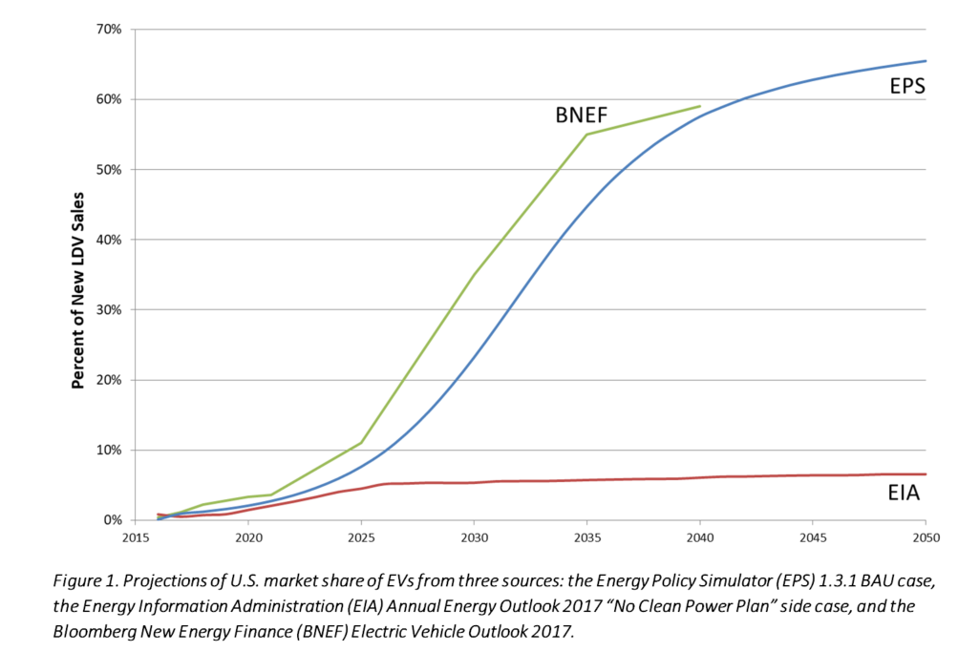 A more bullish scenario of full electrification of freight, commercial, and light-duty vehicles in 2050 examined by The Brattle group indicates electric utilities would sell 50% more kilowatt-hours by 2050 than projected the Energy Information Administration.  This is nearly five times the technical potential for distributed solar to eat away at utility sales.

Along with increased sales, utilities will have new opportunities to sell charging as a service, whether through owning EV charging infrastructure itself, buying and selling the electrons that power EVs, or as a platform for optimizing EV charging.

While fuels like hydrogen or biofuels will compete with EVs for market share, EVs are leading the way.  The inevitable pricing of carbon and rapid cost decline of batteries and EVs means a mostly electrified future will be upon us sooner rather than later.

Modernizing the distribution grid is certainly an opportunity to spend more capital.  But to work for utilities and their customers, grid modernization must achieve value that outweighs costs.

The Electric Power Research Institute stipulates $17-24 billion annually will be needed to fully deploy smart grid technologies through 2030, and benefits could outweigh costs by up to 5:1.  The value smart grid investments create falls roughly into four categories: reduced pollution, reduced costs, increased reliability and resilience, and improved customer quality of life. By working with regulators to identify and reward the types of investments that will create an optimized and integrated grid – while providing environmental and consumer benefits – utilities ensure they’re getting the most out of grid modernization. 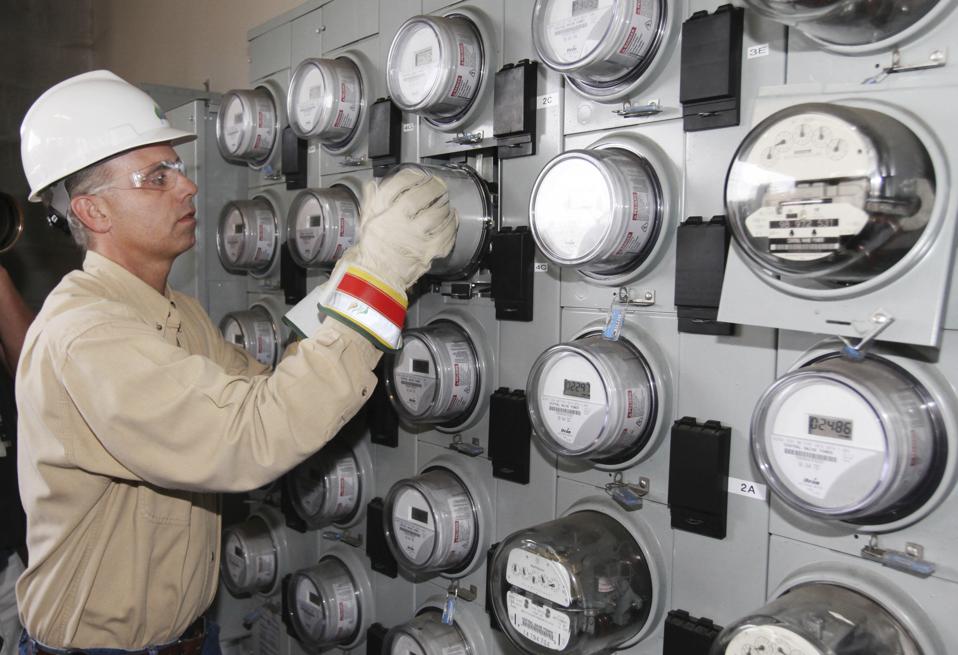 “Modern” infrastructure investments can become a utility-led push to increase capital expenditures in line with the old one-way business model Hyman and Tilles predicted will send utilities into the death spiral.  Though it may seem like an unconditional win for utilities to build new communications networks, install new sensors, and add smart meters, hidden peril exists in raising the fixed costs utilities must recover from customers that increasingly look elsewhere for power.

Effective grid modernization should increase the value of electricity service for customers, reducing the likelihood they want to take their demand elsewhere.  Part of this value comes from enabling the platform functionalities that increase efficiency, allow storage and solar to enter the market, and facilitate customer bill control.  More system awareness, if shared with service providers, enables third party services that could prevent future infrastructure spending.  This helps customers and benefits utilities that are smart about updating their business models, but not those utilities unwilling to adapt to change.

A Death Spiral, Or A Growth Opportunity?

To avoid a death spiral, utilities must focus on value creation, and they should be compensated for it.  Embracing clean energy technologies and grid modernization entails not only new infrastructure, but new business models that generate returns by maximizing customer value.

This epochal shift in America’s power system creates as many opportunities for utilities as risks. But the key to unlocking this opportunity is finding ways to hold utilities accountable for creating these benefits, even as they undertake serious distribution system investments.  Failure to do so may lead utilities down the very death spiral they seek to avoid.