New analysis of investment patterns in Baltimore shows the degree to which decades-old housing policy that divided the city by race has locked in a landscape of “haves” and “have nots.”

That’s just one of the findings in “The Black Butterfly: Racial Segregation and Investment Patterns in Baltimore” that charts and maps capital flow, real estate, lending, and both public and private investment by neighborhood. 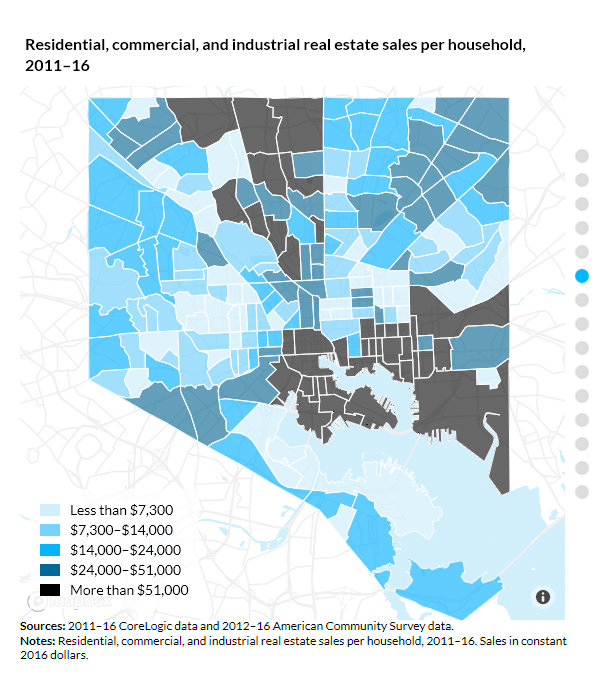 “We absolutely see trends across place that map onto historical patterns – and current, contemporary ones,” said Brett Theodos, co-author of the study along with Urban Institute colleague Brady Meixell and consultant and University of New Hampshire research analyst Eric Hangen.

“These issues have been there for a long time; they’re probably not surprising, on one level,” Theodos said. “On another, the gulf – the magnitude of discrepancy – may be surprising.”

The analysis places the nation’s 30th largest city in context with surrounding jurisdictions and with other U.S. cities.

Baltimore’s poverty rate hovers around 23%, nearly double the national average (12.7%). Baltimore County’s poverty rate is around 9%, just below the state average of 9.7%.

Per capita, multi-family, commercial and industrial lending in Baltimore comes in at 36% of the level of lending in nearby Washington, D.C. 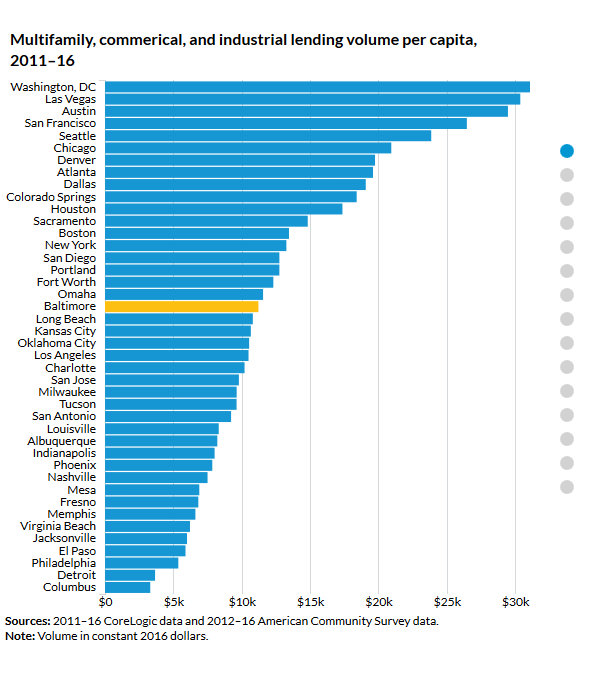 Baltimore comes in at the middle of the pack when it comes to multi-family, commercial and industrial lending per capita. (Urban Institute)

Theodos, who has authored similar publications on Detroit and counties across the country and is currently working on another about Chicago, called Baltimore “an interesting test case” because of its demographic diversity.

“It’s got it all,” he said. “It’s got some affluence, it’s got some poverty. In many ways, it’s a city that’s reflective of older industrialized cities in the Midwest and mid-Atlantic.”

What’s unusual in Baltimore is how affluence and poverty are so distinctly separated by neighborhood.

As the authors note, the present pattern of racial segregation – the city’s “black butterfly” and “white L” – began more than a century ago, in 1911, when the City Council passed the nation’s first housing segregation ordinance.

It was reinforced shortly after then-Mayor James H. Preston levied penalties on any property owner who rented or sold homes in white areas to blacks.

Preston later formed the Committee on Segregation – a body comprised of both public and private figures – to further institutionalize his efforts.

In the 1930s, the Federal Housing Administration codified the geographic isolation and marginalization of Baltimore’s black residents. 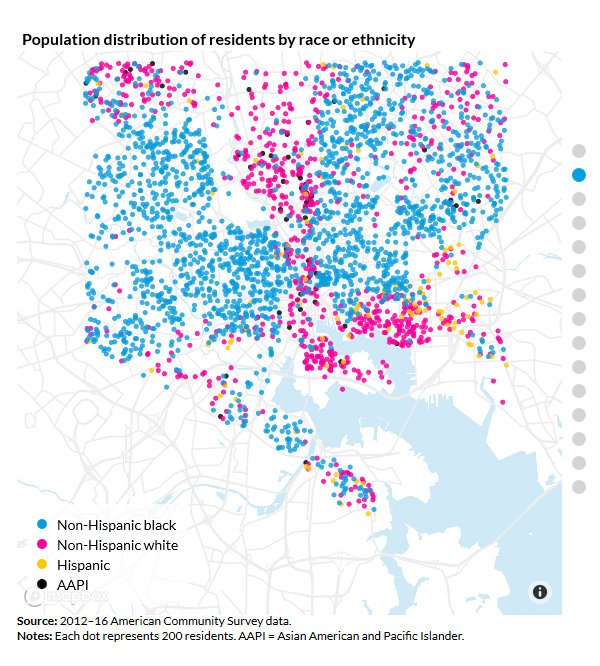 The effects of  such government policies were a demographic map that’s endured for generations and remains remarkably stable in the current study across multiple data sets.

Neighborhood-by-neighborhood maps showing investment in building, construction, rehab and demolition look nearly carbon-copied from the pattern of real estate sales and the level of lending to single- and multi-family dwellings.

Some demographic dividing lines, like north-south-running Charles Street, are especially stark and consistent. 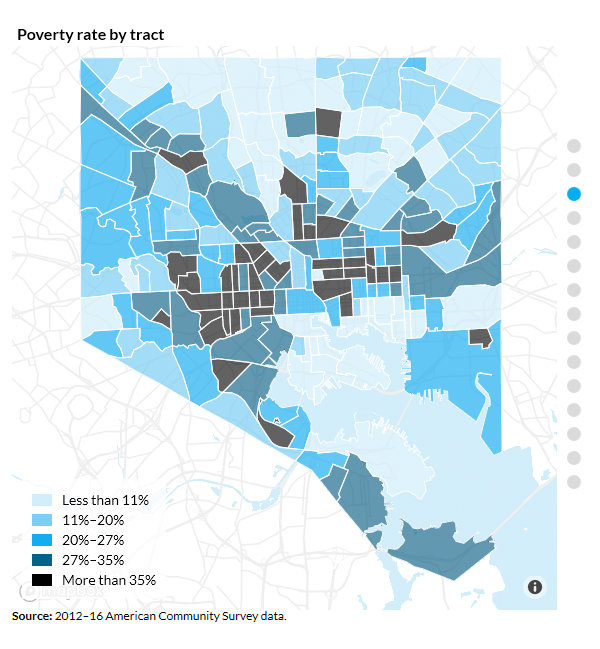 Those neighborhoods with a high concentration of African Americans are poorer and bereft of private spending, while communities along the center and center-east corridors – which are largely white and more affluent – see increased spending and sustained prosperity as a result.

“It’s not surprising,” said Theodos, “but it is worth re-articulating that the legacy of segregation and all that went into that is really durable.” 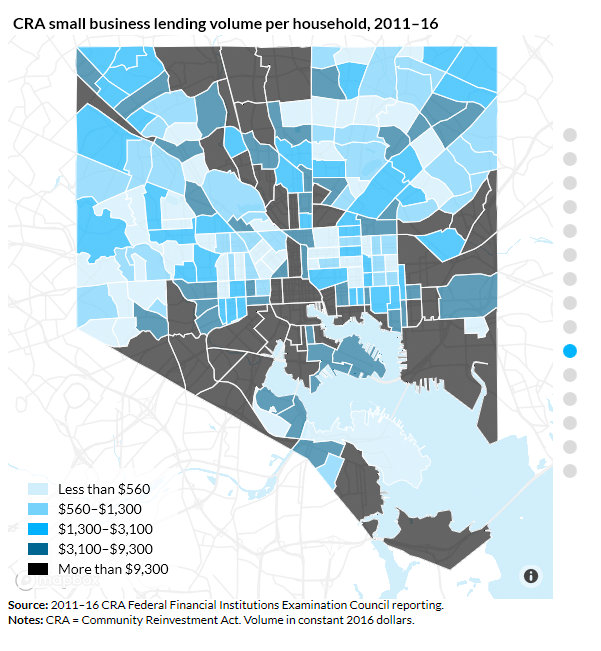 So how does a city like Baltimore buck history? Changing a neighborhood’s trajectory is not as simple as it may seem.

Theodos points to spending, particularly public sector and mission finance spending, as the primary method for infusing cash into a neglected neighborhood.

But those types of funds “are just small in comparison to what the market is doing overall,” he said.

“Where they help round out where investment is flowing into a city, they don’t by any means compensate or bridge the gap between what is and isn’t happening in private sector investment” across other neighborhoods. 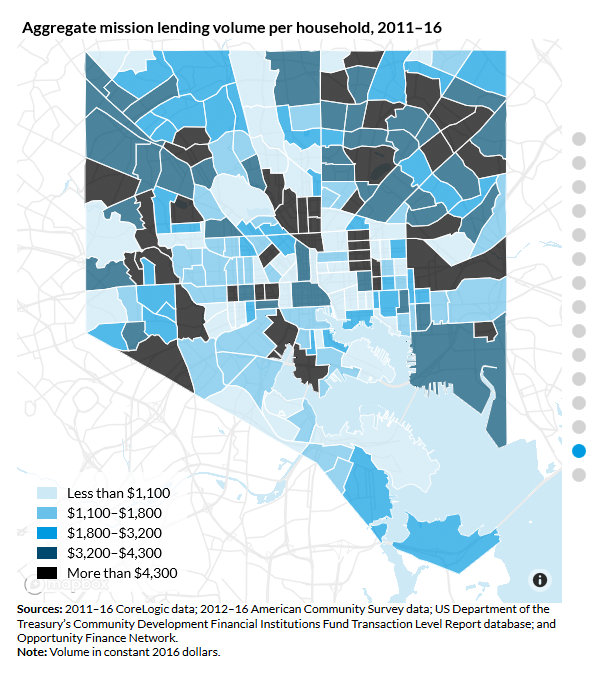 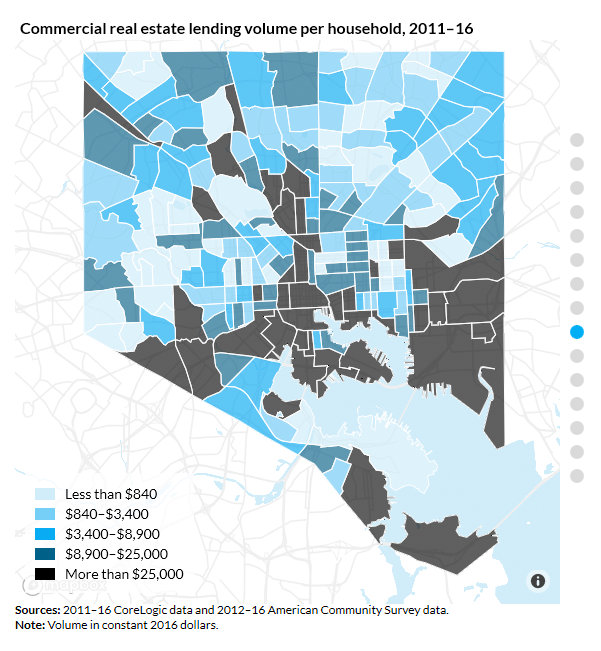 Outside of the “White L” and central business district, commercial lending is most often found in the city’s industrial and waterfront neighborhoods. (Urban Institute)

That means neglected neighborhoods see brief infusions of cash while other parts of the city incur greater spending.

Private sustained spending can turn a neighborhood’s fortunes. Theodos pointed to the area just south of the Johns Hopkins Medical Center and eastward as one example “where there have been changes in the amount of capital access” to a neighborhood.

That may be true for streets and structures, but not the people, he continued. “The challenge is to try to promote increased investment in a way that benefits residents who have been living in those neighborhoods for a long time.”

It’s a challenge the city of Baltimore has yet to figure out. 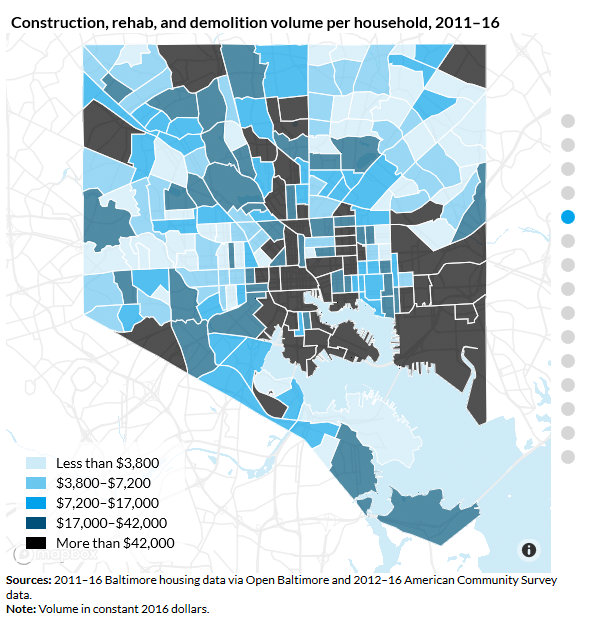 This investment has traditionally gone to neighborhoods within Baltimore’s “White L.” Recently there’s been an uptick around the Canton Industrial Area, Holabird Industrial Park and Dundalk Marine Terminal. (The Urban Institute)