Moving around Bogotá can be a bit of a Jekyll-or-Hyde experience. On one hand, the city is infamous for having the world’s worst traffic. Yet, on the other, its cycling infrastructure is considered an exemplary model of sustainable urban mobility, according to the Copenhagenize Index, which ranks bike-friendly cities. The Colombian capital even spawned a now-international movement in the 1970s called Ciclovía, which sees 1.5 million people pedal across 128km (80 miles) of car-free streets each Sunday morning.

So, when the pandemic reached its shores in mid-March, Bogotá Mayor Claudia López, an avid cyclist herself, enacted one of the world’s first plans to encourage bike travel, using traffic cones to create 76km of temporary lanes.

“Everyone started using a bicycle, and they already knew how to get around on one because we have this bike culture thanks to the Ciclovía,” says Carlos Pardo, a local cycling advocate and senior advisor at the New Urban Mobility Alliance. Pardo got involved at the outset of the pandemic by partnering with a local bikeshare company to provide 400 free e-bikes to health workers. Now, he’s busy persuading the public that the government’s new bike lanes should become permanent fixtures. 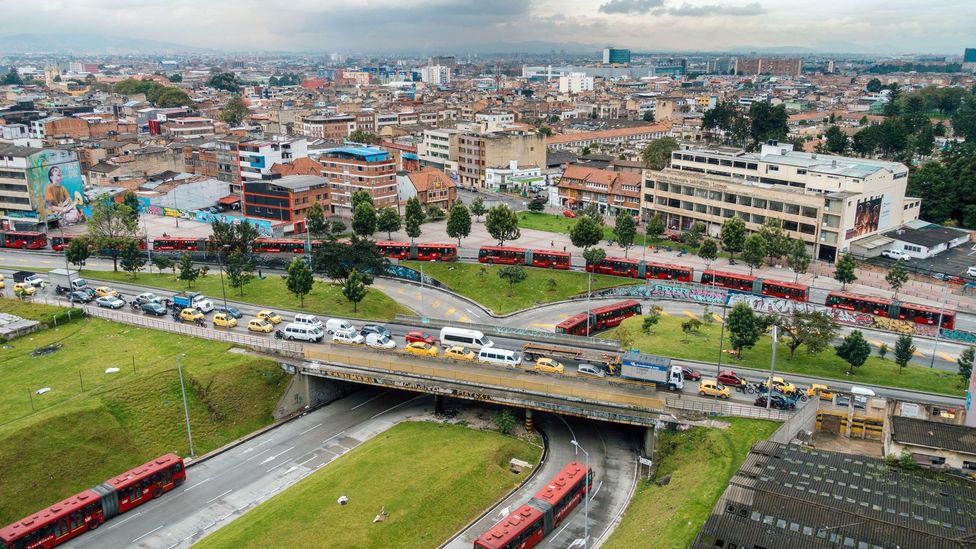 Bogotá is infamous for having the world’s worst traffic, but its cycling infrastructure is considered an exemplary model of sustainable urban mobility (Credit: Alamy)

“Some drivers say, ‘you took away our lane’, but we’re saying, we took one car lane and made a two-lane bidirectional bike lane,” he explains. “So, you’re duplicating the effectiveness of the space, and moving more people per hour, per direction.” Thanks to Pardo’s advocacy as well as quick actions by Bogotá’s mobility secretariat, the extent of the new bike lanes is now 84km, bringing the extensive cycle network to 634km in total. The government says at least 65km of the new lanes will become permanent.

Biking has enjoyed a renaissance around the world as urbanites shun public transport for the relative safety of a two-wheeled commute. Now, many advocates like Pardo are working with local governments in the hope of turning these pandemic-response measures into lasting changes – ones that are more plausible now than ever after lockdowns provided an unprecedented opportunity to fast-track infrastructure trials. The results of these urban planning experiments could not only radically alter the way we commute across global cities, but also make them more resilient to future shocks.

Tabitha Combs, a lecturer at the University of North Carolina at Chapel Hill, has been crowdsourcing data on local actions affecting walking and cycling during the pandemic. She’s identified at least 365 global cities that have allocated new street space for these activities since data-gathering began on 24 March.

“This was clearly a phenomenon that was taking place in cities all around the world at roughly the same time,” she recalls of her decision to document the movement. “It was like a simultaneous global brainwave.”

Results of these urban planning experiments could not only radically alter the way we commute across global cities, but also make them more resilient to future shock

Some cities created pop-up bike lanes. Others implemented ‘slow streets’ by erecting makeshift barriers and reducing speed limits so that walkers and bikers could safely share the road with necessary vehicles. Oakland, California, is credited with kickstarting a slow-streets movement in April that spread across the US after it set aside 74 miles (119km) of its streets, or 10% of its entire grid, for recreation. In Europe, Paris fast-tracked a plan to create 650km of temporary and permanent bikeways, while Rome introduced 150km of its own.

But these measures have not been without their detractors. Berlin was forced to remove eight hastily implemented bike paths in September after a court ruled that the city had failed to provide evidence that the streets on which they were erected were otherwise dangerous for cyclists. New York City also struggled with its implementation, which relied either on community members or law enforcement to police new configurations, neither of which were particularly welcomed. “If you have to rely on policing, your plan is probably not going to work – and if it does work, it’s going to be highly inequitable,” says Combs.

Sandra Caballero, a project specialist for autonomous and urban mobility at the World Economic Forum, says another longstanding issue is that bike-infrastructure projects often happen only in parts of a city that are experiencing an economic boom. “That means the neighbourhoods and communities that are not experiencing that boom don’t get to benefit. So, you see an unequal roll-out, and that’s a key problem.” 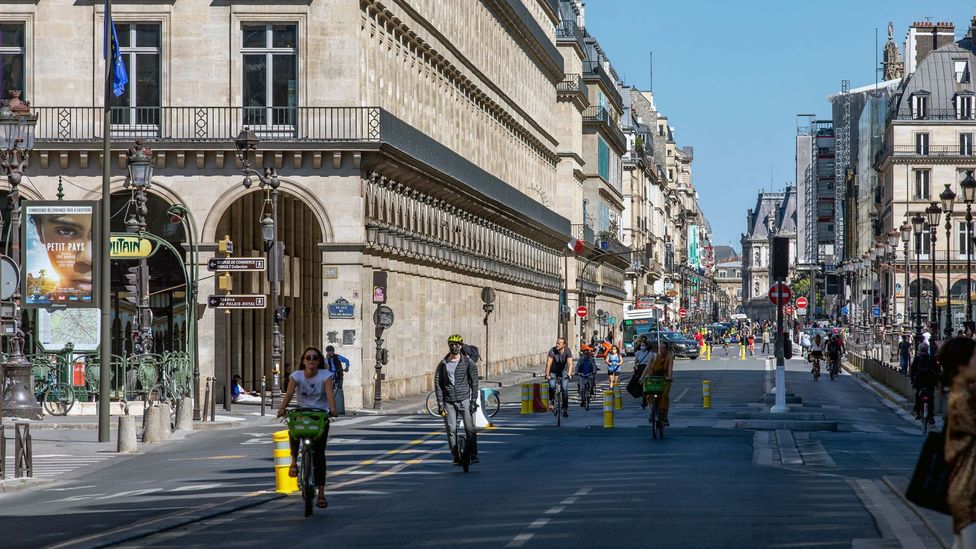 Caballero worked closely with the mayor’s office in Oakland to implement their slow-streets programme, putting up signage, gathering data, informing neighbours about the process and fostering a continuous feedback loop. She thinks it worked – and is still in place – because it was created through an equity lens.

New biking infrastructure has played a key role in incentivising socially distanced open-air travel. At the outset of the pandemic, retail sales for bikes were up 75% in the US and 63% in the UK. Yet, advocates have long touted biking’s ability to increase public health and reduce automobile traffic, particularly given that 54% of journeys in the US and 68% of journeys in England are fewer than five miles. Of course, getting urbanites on bikes is an easy sell in the current climate. Next comes the question of how cities can keep them in the saddle once the coronavirus passes, particularly as enthusiasm has already waned in places such as the UK, where a new report from the RAC shows having access to a car is more important than ever.

Harry Prapavessis, director of the Exercise and Health Psychology Lab at Canada’s Western University, thinks it boils down to three key factors: efficiency, safety and cost. Cities need to fill in gaps in their bike networks, and ensure infrastructure is well maintained even in poor weather. They also need to showcase the cost-effectiveness of a two-wheeled commute, which can be six-times cheaper than driving a car. Plus, he says, there are simple policies that can incentivise cycling, including tax breaks, reductions in healthcare premiums or worker-compensation packages that include benefits for bike commuters.

Prapavessis adds, “These are strategies that lead to real behavioural change because there is this reminder that as you ride regularly, society is showing you that it values and rewards your decision.”

As a behavioural scientist, he hopes 2020 will not be remembered as a blip in time when bike travel soared because of fears over public transport. “That would be really sad. It would mean that we didn’t take advantage of what we could have done to encourage and persuade those people to stick with it.” 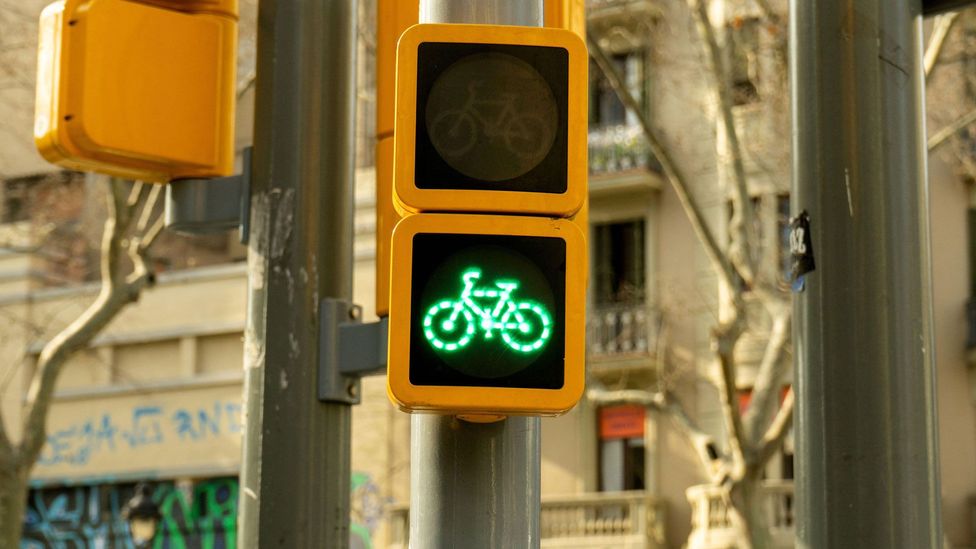 Biking has enjoyed a renaissance around the world as urbanites shun public transport for the relative safety of a two-wheeled commute (Credit: Alamy)

There are signs that governments around the world are actively capitalising on this moment. Some are rolling out experimental pilot programmes that, in normal times, could take a decade of slow and meticulous planning to go from idea to implementation. “During the pandemic, cities tried to shrink that process down to a couple of months or a couple of weeks in some places,” says Combs. “I can’t stress how revolutionary this is in the field of transportation planning.”

The fear of doing something where there’s no precedent or existing standard has been a big hurdle to realising bike lanes, slow streets and other multi-mobility plans. Now, cities can learn and measure the impacts of their pandemic-spurred pilot programmes and feed that information into new guidelines for transport planning in years to come.

“What we’re going to take away from this permanently is the knowledge and understanding of how we can shift the way we do pedestrian and bicycle planning in our cities,” says Combs. The method up until now has been to accommodate the car, then provide biking and pedestrian facilities where possible. “I think this has prompted a lot of cities to back away from that and think, maybe the car doesn’t have to be the default.”