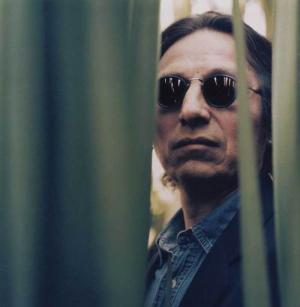 John Trudell, born in 1946 in Omaha, Nebraska, is the son of a Santee Dakota father and a Mexican mother. He grew up near the Santee Reservation in northern Nebraska. He is an author, poet, actor, musician, and political activist. After serving in the Navy, he was the spokesperson for the United Indians of All Tribes’ takeover of Alcatraz, which began in 1969, broadcasting as Radio Free Alcatraz. During most of the 1970s, he served as chairman of the American Indian Movement, based in Minneapolis. In 1979, a fire at a home on the Shoshone-Paiute Tribe’s Duck Valley Indian Reservation in Nevada claimed the lives of Trudell’s pregnant wife, three children and mother-in-law.  Trudell, and others,  believed that the fire was arson, and was an attempt to silence his family’s activism.  A Bureau of Indian Affairs police investigation claimed that it was accidental. After this tragedy, Trudell turned to writing, music, and film as a second career. He acted in three films in the 1990s. The documentary Trudell (2005) was made about him and his life as an activist and artist.“When Columbus got off the boat, he asked us who we were. We said we’re the Human Beings, we’re the People.Conceptually the Europeans didn’t understand that, it was beyond their conceptual reality. They didn’t see us. They couldn’t see who we were.Historically speaking, we went from being Indians to pagans to savages to hostiles to militants to activists to Native Americans. It’s five hundred years later and they still can’t see us. We are still invisible.They don’t see us as human beings, but we’ve been saying to them all along that’s what we are.We are invisible to them because we are still the Human Beings, we’re still the People, but they will never call us that. They taught us to call ourselves Indians, now they’re teaching us to call ourselves Native Americans. It’s not who we are. We’re the People.They can’t see us as human beings. But they can’t see themselves as human beings. The invisibility is at every level, it’s not just that we’re tucked away out of sight. We’re the evidence of the crime. They can’t deal with the reality of who we are because then they have to deal with the reality of what they have done. If they deal with the reality of who we are, they have to deal with the reality of who they aren’t.So they have to fear us, not recognize us, not like us.The very fact of calling us Indians creates a new identity for us, an identity that began with their arrival. Changing identity, creating a new perceptual reality, is another form of genocide. It’s like severing a spiritual umbilical cord that reaches into the ancestral past.The history of the Indians begins with the arrival of the Europeans. The history of the People begins with the beginning of the history of the People.The history of the People is one of cooperation, collectivity, and living in balance. The history of the Indians is one of being attacked and genocide, rather than a history of peace and balance. The history of the People under attack, the Indians, in an evolutionary context, is not very long, it’s only five hundred years.The objective of civilizing us is to make Indian history become our permanent reality.The neccessary objective of Native people is to outlast this attack, however long it takes, to keep our identity alive.” John TrudellHappy Columbus Day Everybody.   Theme: Cultural Contributions to U.S.Bibliography:

John Trudell: When Columbus got off the boat.