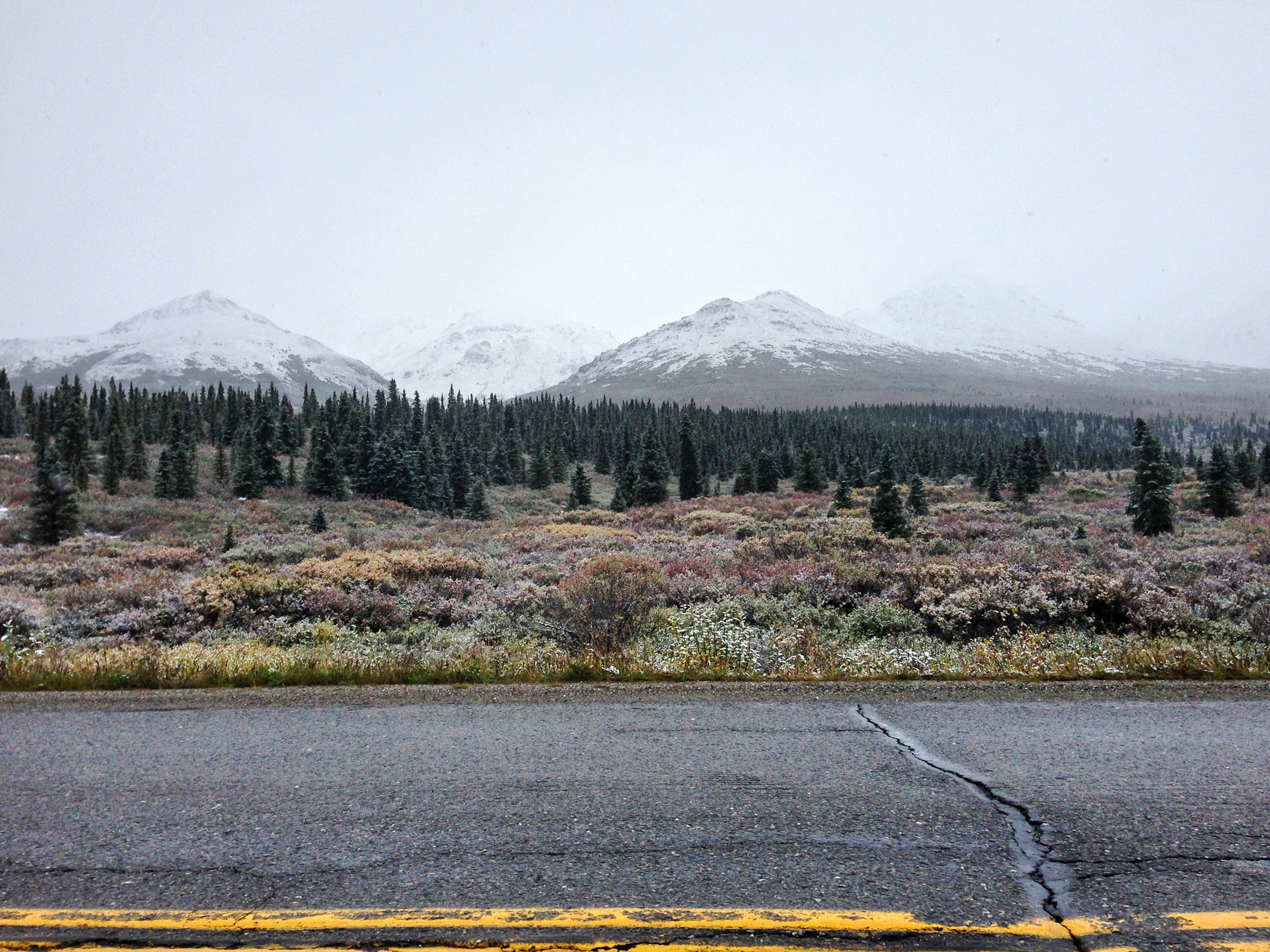 Snowcapped mountains and evergreens along the Alaska Highway.

For seven decades, the Alaska Highway has mesmerized adventure-seeking travelers. In one breathtaking stretch through the Yukon, glacier lakes and rivers snake through aspen forests and rugged mountains that climb into the clouds.

In recent years, though, a new sight has been drawing motorists’ attention, too, one they can spot just a few feet from their cars’ tires. Bumps and cracks have scarred huge swathes of the road, with some fissures so deep a grown man can jump in and walk through them. Scientists say they’re the crystal-clear manifestation that permafrost — slabs of ice and sediment just beneath the Earth’s surface in colder climes — is thawing as global temperatures keep rising.

In some parts of the 1,387-mile (2,232 kilometer) highway, the shifting is so pronounced, it has buckled parts of the asphalt. Caution flags warn drivers to slow down, while engineers are hard at work concocting seemingly improbable solutions: inserting plastic cooling tubes or insulation sheets, using lighter-colored asphalt or adding layers of soccer-ball sized rocks — fixes that are financially and logistically daunting.

“It’s the single biggest geotechnical problem we have,” said Jeff Currey, materials engineer for the northern region of Alaska’s Department of Transportation. “The Romans built roads 2,000 years ago that people are still using. On the other hand, we have built roads that within a year or two, without any maintenance, look like a roller coaster because they are built over thaw-unstable permafrost.”

At the time of its construction, the highway was a show of American ingenuity and determination during World War II. In March 1942, just months after the Japanese bombed Pearl Harbor, the U.S. Army hastily began to build a road linking Alaska, another exposed Pacific outpost, through Canada to the lower 48 states. Seven months later it was opened, providing a key supply line in case of invasion.

Today the highway serves as the main artery connecting the “Last Frontier” with Canada and the northwestern U.S., bringing tourists to Alaska cruise ships; food, supplies and medicine to remote towns; and equipment to oil fields and mines that are the region’s lifeblood.

Judy Gagnon, a 67-year-old trucker, has driven Canada’s roads since the early 1970s and said she’s seeing “more pieces fall apart.” Some damage is regular wear and tear, but “they are having trouble maintaining the road bed, because you have the permafrost underneath, and then you have it melting and it’s sinking.”

The highway’s dark surface absorbs sunlight while the shoulders trap water and snow that act like a warm blanket. The heat breaks down the permafrost (soil, rock or sediment frozen for at least two consecutive years). Annual repair costs for one section that runs through the Yukon are C$30,000 ($22,900) per kilometer, seven times the average, according to a territorial government report.

The Alaska Highway challenged its original builders seven decades ago by swallowing up trucks. Any digging caused some terrain to thaw unless extra layers of logs and gravel were installed on top to ensure that “the frost was permanently locked in,” according to a 1944 U.S. War Department film.

“There are so few roads, and there is no redundancy, so every road is critical,” Currey said. “A detour is possible, but the detour might be 700 miles.”

Forty-three percent of a 124-mile stretch between Alaska and Whitehorse, the Yukon capital, is “highly vulnerable to permafrost thaw,” according to a report co-authored by Fabrice Calmels, a researcher at Yukon College.

“It’s like taking five stories out of a 10-story building,” he said in an interview.

One solution is to keep heat away by building thicker embankments with larger gravel and rocks that help circulate cooler air, or by adding layers of insulation such as foam. More expensive options include installing pipes to vent out warmth. Some vents, called thermosyphons, are tubes, often filled with liquid carbon dioxide, that use a cycle of evaporation and condensation to take advantage of cooler air temperatures. These work if the difference above and below ground is at least 1 degree Celsius.

The key is creating infrastructure that’s “resilient” to future changes, said Paul Murchison, director of transportation engineering at the Yukon Department of Highways and Public Works.

Mark Carney, governor of the Bank of England, and Canada’s Environment and Climate Change Minister Catherine McKenna stressed the urgency of the problem at a July 15 discussion on global warming. McKenna gave a grim update on Carney’s birthplace in the Northwest Territories, just east of the Yukon.

“Communities are unable to reach each other, it’s harder to get goods there,” she told attendees in Toronto. Thawing permafrost isn’t “just an inconvenience, folks; it’s a change in the way of life.”