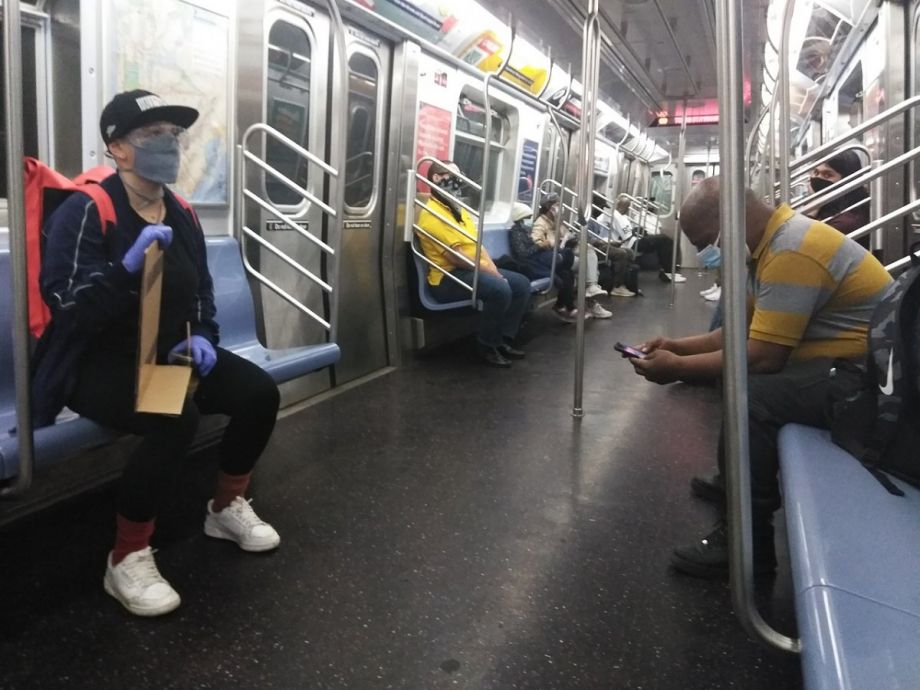 The debate over transportation equity has heated up, given the sharp change in transit-rider demographics once the COVID-19 pandemic took most whiter and wealthier riders off of buses and (especially) trains. Not everyone sees eye-to-eye on just what transportation equity means. But a growing number of social-justice activists, urbanists and even transit-industry professionals now argue that making transit free for all should be one of the tools used to make transportation more equitable. Kansas City, Missouri, got the conversation started at the end of 2019 when its city council voted to make the city’s bus system fare-free. Now some of the nation’s biggest transit agencies are wondering whether to make mass transit free for everyone, or at least a lot cheaper to ride than it is now.

Meanwhile, some fresh thinking about how to reduce the carnage on roads is prompted by the “pandemic paradox,” whereby the death toll rose from collisions between vehicles and pedestrians, cyclists or other road users, even as the number of vehicle miles traveled dropped. One idea that’s caught on is to build safety into the road design — that is, instead of relying on laws and spot fixes to slow traffic, to design them from the start so that traffic moves more slowly. This approach, known as “Safe System,” is gaining adherents within the highway engineering community, even as the weight of history continues to exert force in the opposite direction.

The last time cities experimented with fare-free transit, in the 1970s and 1990s, the experiments proved short-lived, as problems with safety and security combined with higher maintenance costs made that strategy uneconomical.

This time around, it could be different. The COVID-19 pandemic revealed just how much lower-income and nonwhite riders depended on mass transit to get them to the essential jobs they couldn’t perform at home. Where ridership on subways and regional rails took significant hits once pandemic restrictions took effect, bus ridership in major cities fell far less. Many lower-income workers relied on buses to get them where they were going.

This, in turn, has led transportation equity advocates, elected officials and even transit agency managers to consider making reduced or free fares a permanent fixture as ridership recovers. In a graphically impressive interactive multimedia feature, The Washington Post took a deep dive on May 17 into how three of the nation’s largest transit agencies — New York’s Metropolitan Transportation Authority (MTA), the Washington Metropolitan Area Transportation Authority (WMATA), and Bay Area Rapid Transit (BART) — are wrestling with the idea of treating mass transit less as a fare-supported service and more as a utility that is as essential as a city’s roads, which are not, by and large, funded by direct user fees.

The Post feature includes audio testimony from riders about how the pandemic changed their experience of riding transit and the challenges they faced in paying for the rides. It notes that the experience of several systems (including D.C.’s) with going fare-less during the pandemic has made those agencies more willing to consider offering free fares to a larger segment of their riderships. Among the graphics are several charts that show the dramatic shift in the makeup of the ridership after the pandemic: in the San Francisco Bay Area, for instance, fully half of all BART riders in 2020 earned less than $50,000 per year; two years earlier, 40 percent of them took home $100,000 a year or more.

Robbie Makinen, head of the Kansas City Area Transportation Authority, points to other economic benefits of making transit fare-free. As he put it, the $2 or $2.50 the riders save gets invested elsewhere: “It’s going to buy a pair of shoes. It’s going to buy some groceries. It’s going to small businesses,” Makinen told the Post. “That dollar is going to turn over two or three more times and be worth a hell of a lot more than it was just [by] being in my fare box.”

Many in D.C. also think that fare-free transit makes sense now. The feature notes that a coalition of groups advocating “transit justice” wants the federal government to spend $60 billion a year on subsidizing transit service, something the Feds had not done until the pandemic hit. Critics believe the high cost is an obstacle to implementation, especially if the funds come from diverting highway spending to transit investment, as advocates would like to see happen. But Eno Center for Transportation President Robert Puentes told the Post that people are coming around to this new view of transit service: “We’re looking at transit differently and not as a tool for mobility or primarily just moving people around,” Puentes said. “The purpose of transit is to connect people up to jobs and economic opportunity.”

Historically, transportation engineers have relied on laws and traffic control devices as the principal means of getting drivers to slow down on city streets. But as those same streets became emptier during the pandemic, the limits of this philosophy became clear. Deaths from collisions between motor vehicles and non-car-driving road users have risen as drivers have driven less; the Governors Highway Safety Association forecast an eight percent rise in pedestrian deaths for 2020 even as vehicle miles traveled were falling by as much as 16 percent.

Smart Cities Dive reports that the solution to this problem is to design streets and roads so that cars have to travel more slowly on them from the outset. This approach, known as “Safe System,” has been endorsed in a report issued by the Bloomberg School of Public Health at Johns Hopkins University and the Institute of Traffic Engineers.

One example of a safe-system approach is to replace four-way stops and signalized intersections with roundabouts. These reduce the likelihood of crashes by forcing drivers to move through the intersection slowly instead of requiring them to take conscious action to avoid hitting another vehicle or a pedestrian.

According to the article, this, too, is a transportation equity issue — or it can be, depending on where you focus the investments in inherently safer roads. “If you prioritize implementation in areas that have been underserved and at risk, you close the gap in those communities and make everyone safer,” says one of the report’s co-authors, former National Highway Traffic Safety Administration official Jeffrey Michael.

The Federal Highway Administration is in the process of updating the Manual of Uniform Traffic Control Devices, the road engineer’s bible. This presents the opportunity to make safer streets a fundamental building block of American road design. But, as Smart Cities Dive also notes, inertia is a powerful force, and while the National Association of City Transportation Officials (NACTO) can be counted on to advocate for this new approach, not all highway engineers or state transportation departments are on board with it yet.

Next City contributor Sandy Smith is the home and real estate editor at Philadelphia magazine. Over the years, his work has appeared in Hidden City Philadelphia, the Philadelphia Inquirer and other local and regional publications. His interest in cities stretches back to his youth in Kansas City, and his career in journalism and media relations extends back that far as well.

Black People Have Nothing To Show For A Biden Presidency Despite Turning Out In Droves To Put Him In Office.

“If the Republicans are seen as the only enemy then we have already lost.”

Joe Biden has yet to make good on any campaign promise he made to voters. The $2,000 stimulus became just $1,400. There is no minimum wage increase. He promised a public option for the Affordable Care Act but now says that isn’t going to happen. He is cutting back on his infrastructure initiative, the American Jobs Plan, from $2.3 trillion to $1.7 trillion in order to placate Republicans and right wing Democrats. Biden said he supported a paltry $10,000 in student loan relief only to back away from that too.

So far his only positive policies are in regard to temporary tax benefits for families with children and additional unemployment payments. But that help is in danger as 22 states have said they will no longer accept this federal money. In typical fashion, Biden says his hands are tied and there is nothing he can do to help millions of desperate people. Apparently the federal government can’t figure out how to write checks anymore.

Biden supporters advocated the need for harm reduction in the campaign against Donald Trump. They knew that Biden was always on the right wing of the putative left party and made their case by raising the specter of another Trump term. But no one was honest about the true nature of the political system in the U.S. The sad fact is that dependence upon either wing of the duopoly is a losing proposition.

“Biden Says His Hands Are Tied.”

The absence of a strong and well organized movement means that harm reduction is always a fantasy. The Democratic Party establishment chose Biden to be the nominee and didn’t get the pushback that was needed against their backroom deal making. Unscrupulous Black operatives derided anything other than obedience to their bosses. We were told to go along and be quiet and that any other response meant the return of Trump. The lack of demands set us up for failure, propaganda about cutting poverty, and phony progressives taking a dive instead of standing up for the people.

Black people have nothing to show for a Biden presidency despite turning out in droves to put him in office. Black politics will have to be recreated by people acting independently from the class of political misleaders. If not, we face a cycle of Democrats losing after they fail to make good on their promises, who are then followed by Republicans who sneak into office using voter suppression tactics which work when there is a lack of enthusiasm for the do nothing Democrats. It is time to get away from this vicious cycle.

The moment is ripe to acknowledge that this system is a complete sham and exists only to help the 1% do as much as they can to oppress the 99%. We will live with a cycle of Republicans and Democrats who use different methods but always end up working against our needs.

This is not the moment for timidity. The faux progressives have to be called out as much as the Democrats most conservative members. They work together after all, each one willingly going along with their role which allows all of them to fool the rank and file into thinking that one side is good while the other is bad. If the Republicans are seen as the only enemy then we have already lost. They all must be seen as our adversaries whom we must oppose strongly and publicly.

This obvious fact is not lost on Nancy Pelosi or the rest of the leadership. They keep the Capitol building off limits and use the Trump supporters’ January 6 riot as their excuse. What they really fear is that the left may learn a lesson about bringing their demands directly to Washington. The House of Representatives recently approved $1.9 billion for the Capitol police force, an unnecessary sum of money that will be used to keep out the left and not Trump dead enders.

If history is any guide, the Democrats will lose their razor thin margins in the 2022 midterm elections. Should that be the case, Biden’s obfuscations will be the cause. The Trump trauma will have diminished and millions of people who made great efforts to vote for Biden will instead ask what he has done for them lately.

Regardless of the outcome, the tired notion of harm reduction must be thrown into the trash can of history along with the democratic party. No one should be shocked when the only promises kept are those made to the donor class. Biden’s only truthful statement was saying that nothing would fundamentally change.