We grassroots Amazonian women defenders of the rainforest against the extractive economic model resort for the second time to the President of Ecuador, to explain to you our mandate.

That the Ecuadorian state is signatory to important international conventions and declarations for the rights of indigenous peoples such as:

We’re not talking about any kind of consent, but instead demanding that respect should be accorded to our right to self-determination and to the international standards established regarding consultation and consent, as that established in the Inter-American Court’s ruling in the case of Sarayaku vs the State of Ecuador.

Given that “prior consultation” was a process entirely corrupted and manipulated by the Secretariat of Hydrocarbons, that in no way revealed the position of the communities and the legitimate organizations that are legally recognized by their base communities.

Far from there being a commitment to respect the indigenous peoples’ social organizations, the Ecuadorian government initiated an aggressive process of disregarding the real organizations and leaders, while legalizing organizations and persons in the service of the extractive project in the Amazon, stimulating violent actions particularly against indigenous women leaders.

In the implementation of the extractive and oil projects included the South Eastern Round and the concession of Blocks 79, 83, 28 and the expansion of Block 10; and additionally, with the launch of mining operations and concessions to the Chinese companies EcuaCorriente SA (ECSA), the Lowell corporation, Ecuadolidos, the Belarusian Oil Company, Andes Petroleum, and CELAC, EP; our rights were not respected.

Considering that in order for mining companies to enter Shuar territory they violated the fundamental human rights to life, they militarized and continue to militarize the territory,

provoking displacement and harassment of the Shuar families in order to facilitate mining operations.

The indigenous leaders who were opposed to the implementation of the mining projects were criminalized and continue to be persecuted. They have had to abandon their families and territories, and hide in the rainforest.

Given this, we women of the Amazon are demanding compliance with the following mandate:

of the Siocopay, Siona, Cofan, Kichwa, Shuar, Waorani peoples, and campesino communities of the Northern Amazon, Sucumbios and Orellana provinces.

Our Voice Is Our Power 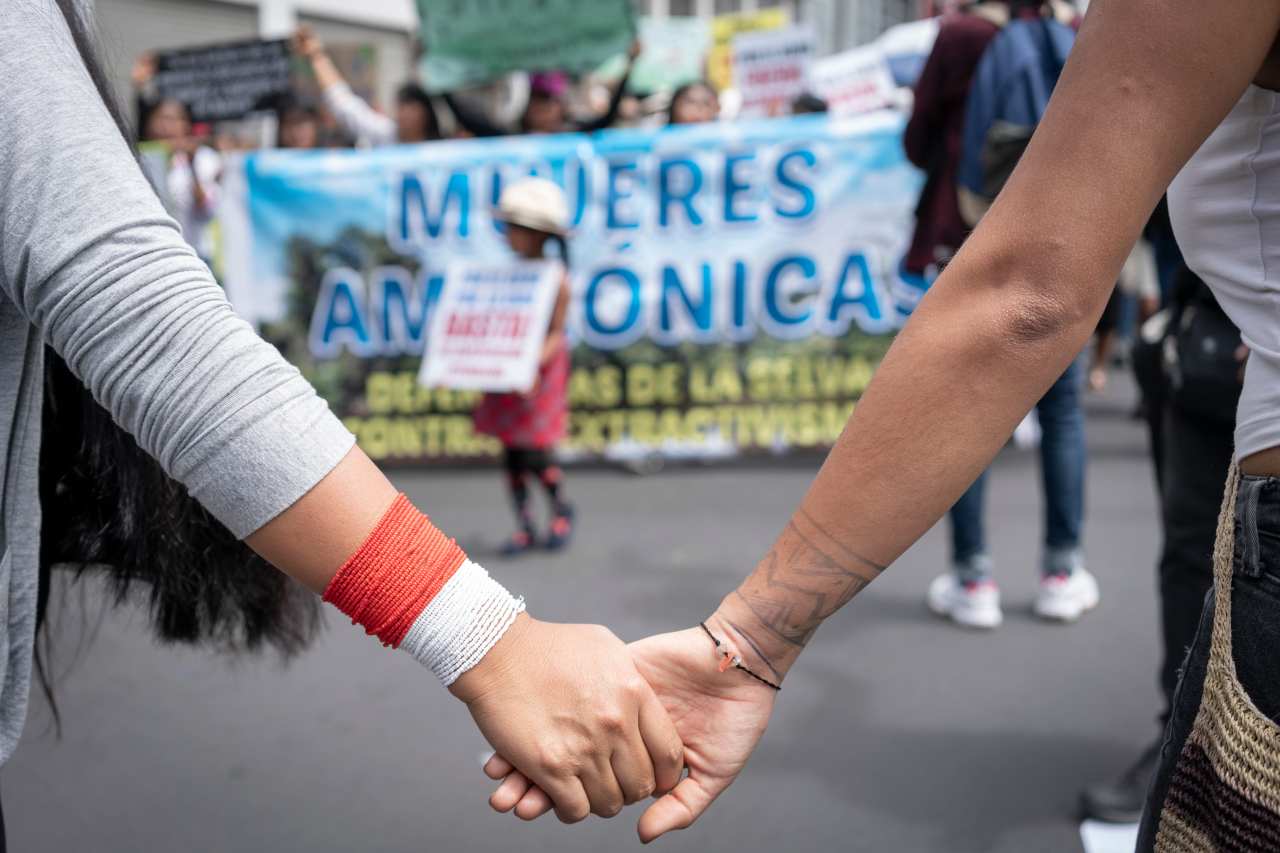 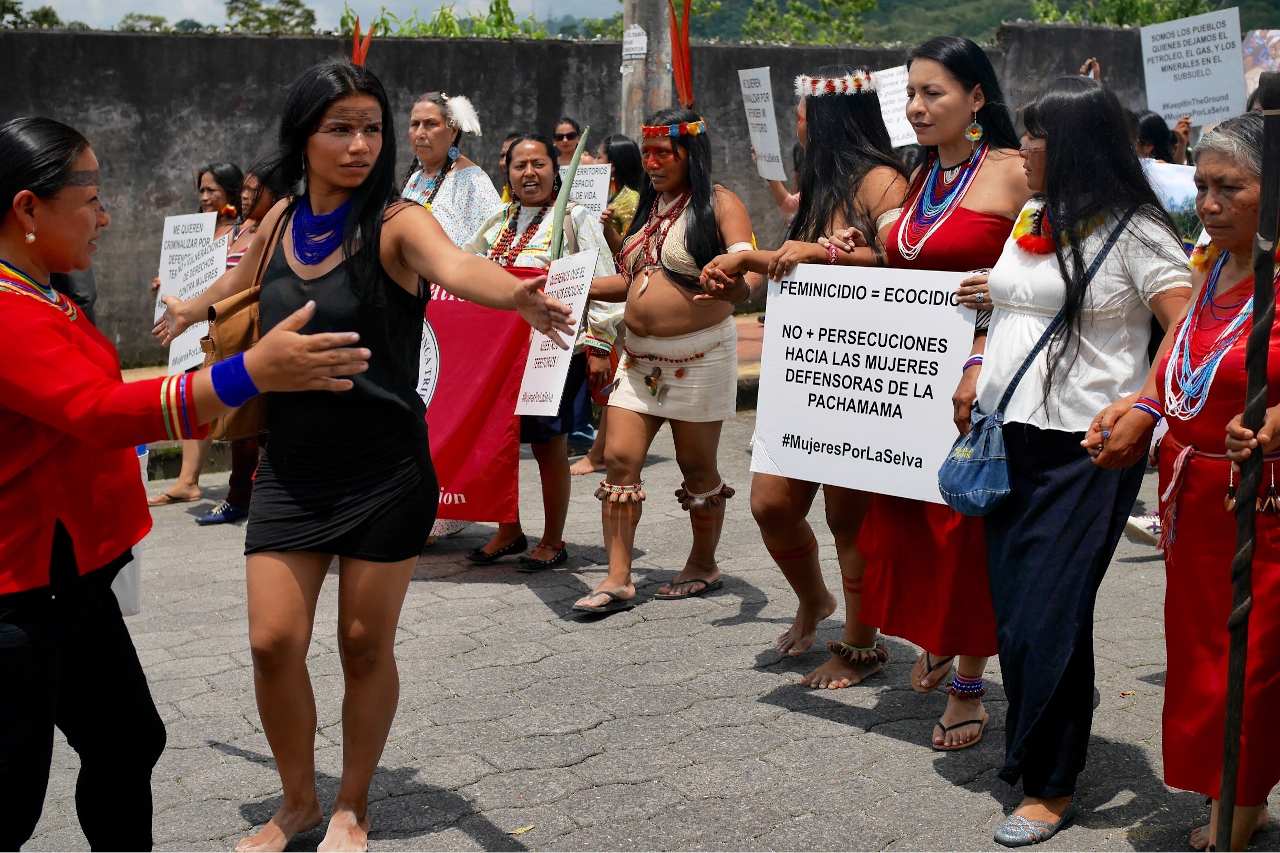 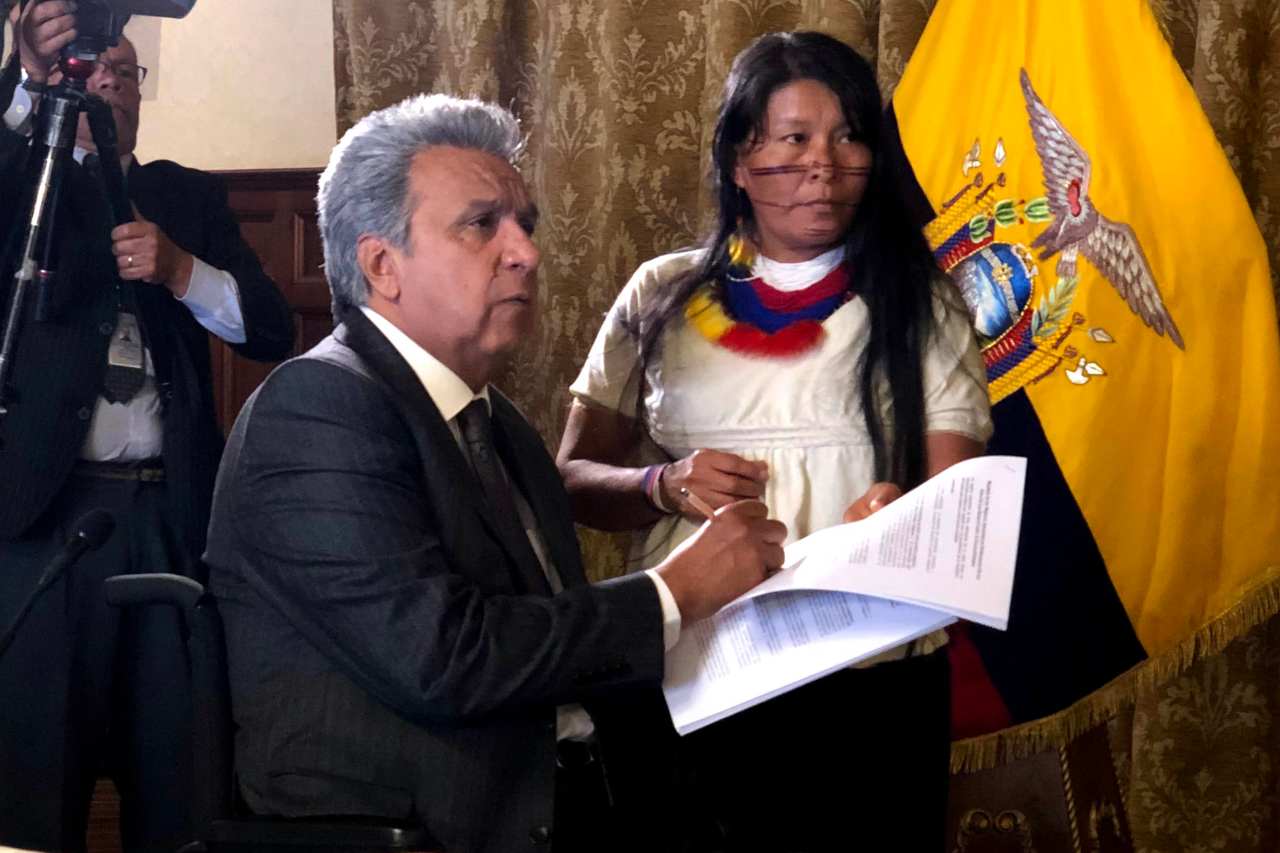 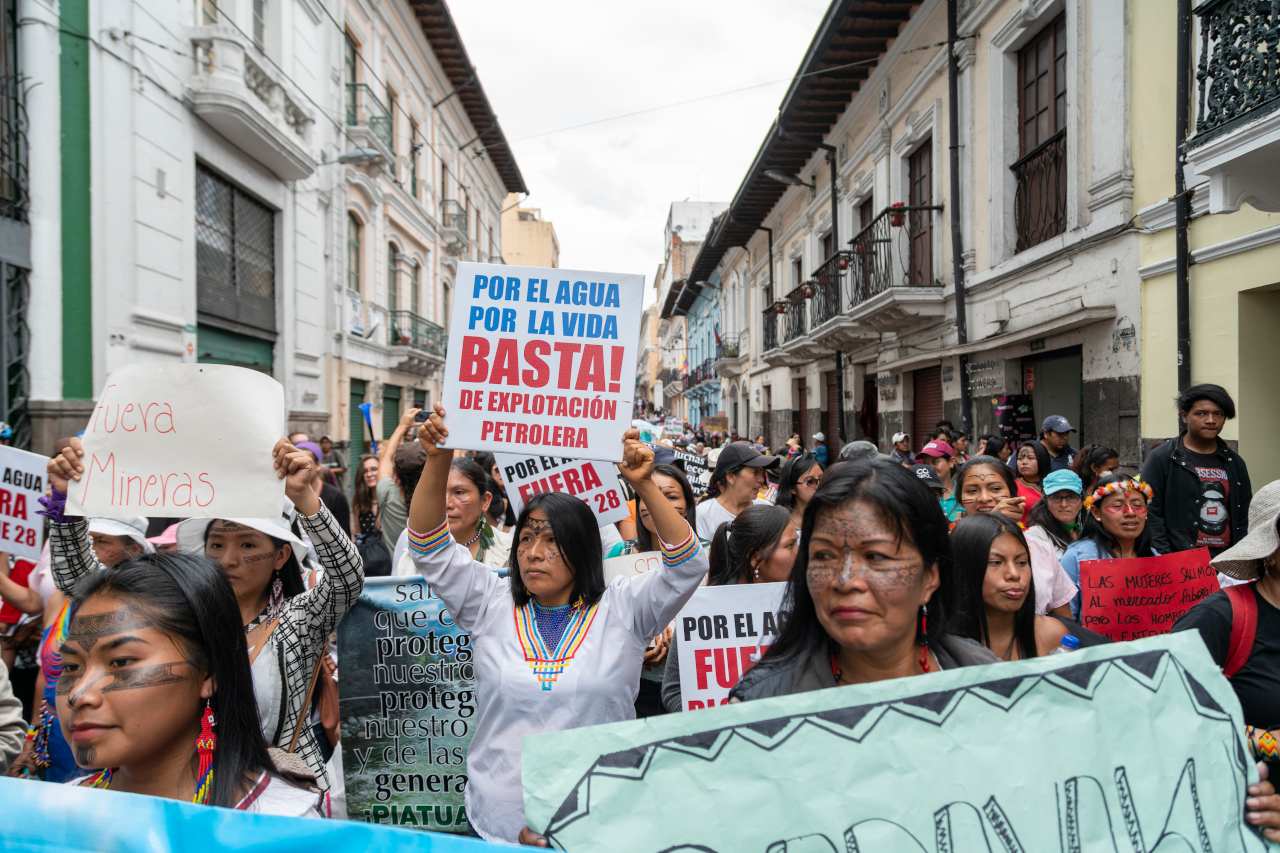 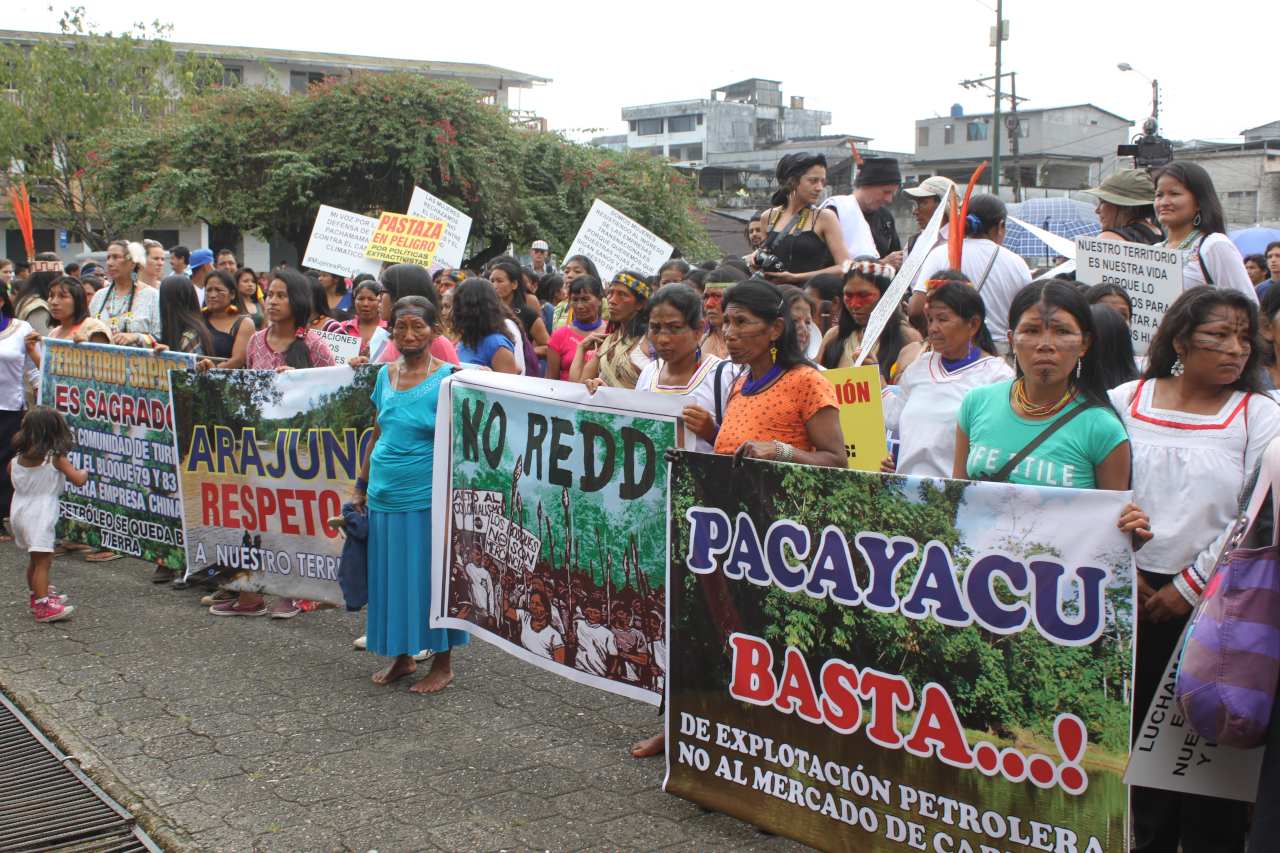 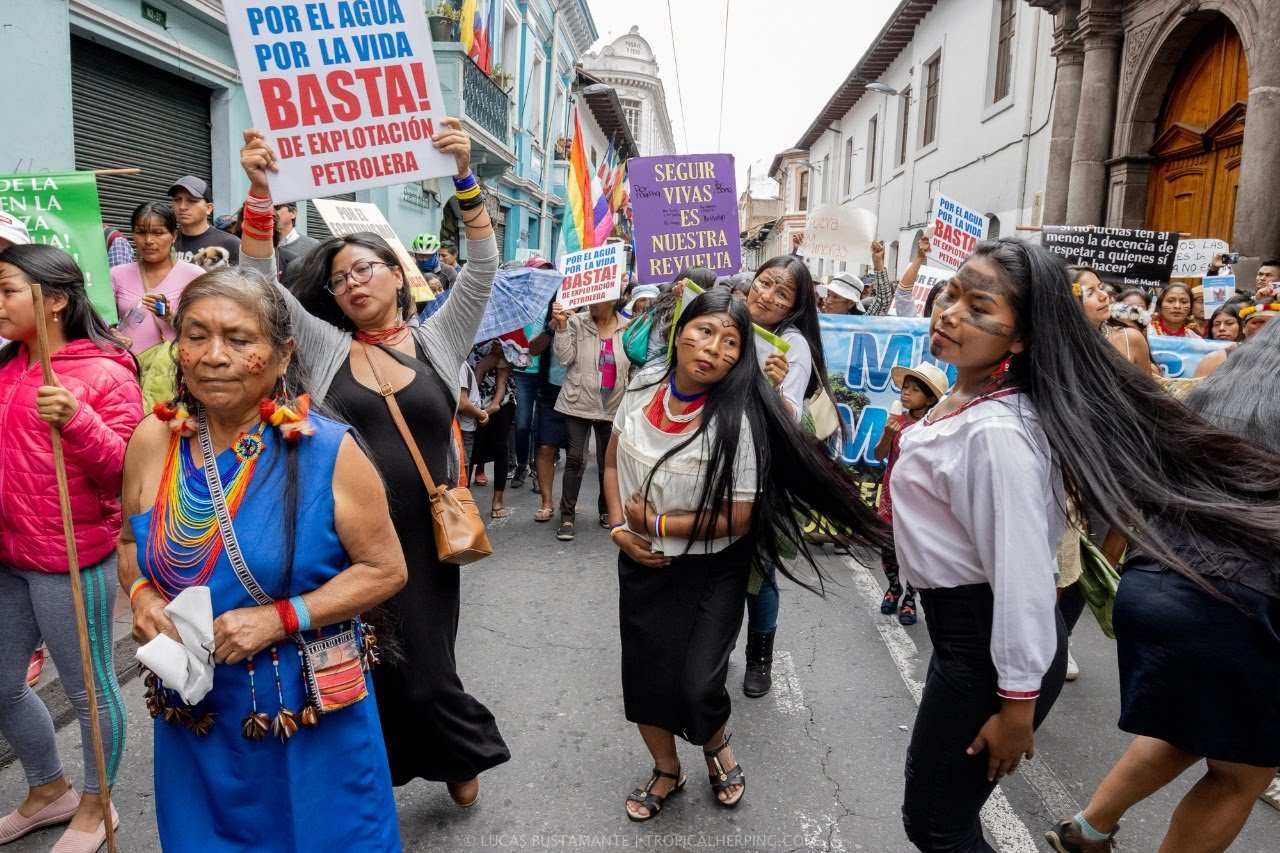 “We Indigenous women have songs that save us, that protect us, so that there is not so much violence and so that we do not suffer so much. We have sacred songs to harmonize. To sweeten the hearts of angry men, and of society.”

Indigenous women in the Amazon have been at the forefront of the fight against climate change and the destruction of the Amazon rainforest, and today we are stepping up into new leadership roles, successfully forcing out extractive industries and companies from our sacred territories.

In response, women are being systematically targeted and persecuted by oil companies and the government. These attacks and threats continue unsolved and unpunished, and Indigenous women leaders continue to be unprotected. This is clear: extractivism and violence go hand in hand.

Indigenous Amazonian women, who are defending the Amazon rainforest and our global climate by keeping the oil in the ground, are more exposed to experiencing multiple types of violence. Threats emerge from within and, even more so, from outside their territories. But for many Indigenous women there is no guarantee that their rights will be respected. We have knocked on the doors of the judicial system, we have appealed to the hearts of the government officials, but they keep trying to silence our voices. Because they know that our voices are powerful.

Worldwide, we also see more and more women coming together to demand systemic change for women’s rights. Earlier this year, on International Women’s Day, women around the world took to the streets to reclaim our power and to demand an end to the systemic violence that we experience.

With songs and traditional chants, the Women Defenders of the Amazon (Mujeres Amazónicas Defensoras de la Selva) joined thousands of other women in Quito, the capital of Ecuador, as part of nationwide marches for women’s rights. Together with Amnesty International and Amazon Watch, the women handed over 250,000 signatures to the General Attorney of Ecuador, demanding an “effective” investigation due to recent attacks and threats against women defenders of the Amazon, as well as the end of state concessions to oil, logging, and mining companies in our territories.

“We demand that the authorities take the necessary measures to guarantee the security and protection of Indigenous women leaders and their families based in our territories, who are currently being threatened for the actions they have taken as human rights and environmental defenders”

In Quito, all the women marched united in song. And as we stood outside the government palace in the cold, with our babies on our backs, with the sun burning in our faces waiting for the president to receive us, we sang. We sang to the Earth. We called on the strength of our ancestors. We sang to the hearts of the government officials. When we handed over the Mandato to the president, we continued singing. Because our voice is our power.

This year, as the women returned to their communities, the Bobonaza and Villano river basins were hit by massive floods. Many people lost their houses, chakras, and tools, and they were forced to take refuge and rebuild their communities. Natural disasters and extreme weather patterns are becoming more and more frequent in this area. In just two months, there were at least five floods, clearly a result of a rapidly changing climate. Shortly after the flood, the first cases of COVID-19 appeared in the Amazon, reaching communities that are far away from an already crumbling health system and without access to the culturally responsive information and care necessary to combat the pandemic.

In the midst of this extreme emergency situation and because of the government neglect, Indigenous women leaders decided to act. They organized themselves to spread vital information about COVID-19, and sent tools and food to families affected by the floods and the pandemic. They coordinated professional medical support for families in situations of extreme vulnerability and sent out medical supplies where it was needed most. They worked side by side with local indigenous organizations and the families in the communities organized and worked in solidarity, or mingas, to rebuild their houses after the floods. Now life in these communities is slowly returning to normal.

But this is not the first time Indigenous women are taking action and holding their families and communities together through difficult situations.

In 2003, the women of the Kichwa People of Sarayaku played a crucial role in forcing out the oil companies and military from our territory, and a decade later Sarayaku won a historic victory against the Ecuadorian government for violating our free, prior, and informed consent, setting an important precedent for Indigenous rights in the Amazon and around the world.

In the Kichwa territory of Villano, after almost thirty years of unregulated oil exploitation with devastating consequences for the local villagers, the leadership of women including Salome Aranda has birthed a new resistance challenging the AGIP oil company’s power and destructive practices.

In 2019, Waorani leader Nemonte Nenquimo led a legal case against the Ecuadorian government which resulted in a historic victory protecting their ancestral territory from oil development.

Most recently, the Shuar Arutam people led by a woman, Josefina Tunki, have filed a lawsuit against the Ecuadorian government for violating their rights as Indigenous people.

And across the Ecuadorian Amazon, the movement of Mujeres Amazónicas, has united women from six different nations protecting their territories, their homes, their rights as women, and the future of their children.

These recent years have taught us the power of resilience of Indigenous women, the power of holding our communities together, and therefore also the importance of bringing forward our voices. Stand with us in our fight for our rights, and for the rights of our Mother Earth because all depend on her! If we did not realize that before, this pandemic has surely taught us that we are all connected.

We are continuing to organize in response to the multiple threats we face, including territorial violations and gender violence, by focusing on gender justice, collective healing, Indigenous economic development, and amplifying the voices of Indigenous women. We continue supporting each other. We continue singing our songs as we plant seeds, as we walk together calling on the strength of our ancestors, and for the healing that this world so desperately needs.

So if we, Indigenous women in the Amazon, are protecting our Mother Earth, will you stand with us?

Nina Gualinga is a Women Defender of the Amazon from the Kichwa community of Sarayaku and Sweden. She is a mother, student, and advocate for women’s rights, Indigenous peoples, and climate justice. She has recently joined Amazon Watch’s international field team to continue her work.