Jeffrey Jablansky is the very model of a savvy electric-vehicle early adopter. He opted for a Chevrolet Bolt early last year, choosing a vehicle far ahead of all others by his preferred metric: electric range per dollar. But he never considered buying the car; instead, he pays $220 per month to lease the vehicle.

“I just think in three years I’m going to be delighted at what else is available,” said Jablansky, who writes about cars as a freelance journalist. “And we’re going to laugh one day that we used to plug cars in for eight hours at a time.”

It’s not just that almost nobody is driving electric vehicles right now. Only 1 percent of the global market has gone electric, and the number is even smaller in the U.S. At this point, years after the first Chevrolet Volt and Nissan Leaf zipped off assembly lines, the market for plug-in vehicles in America is dominated by leases.

U.S. drivers now lease almost 80 percent of battery electric vehicles and 55 percent of plug-in hybrids, according to Bloomberg New Energy Finance. The lease rate for the country’s entire fleet hovers around 30 percent. (There’s one blank spot in the data: Tesla does not divulge how many of its vehicles are leased, and since it sells its cars directly rather than through dealerships, the company doesn’t have to.)

The lopsided consumer preference for leases is fueled by the meager demand for battery-powered vehicles on the used market. Partly this is a consequence of public policy meant to spur electric vehicle adoptions: buyers of pre-owned cars can’t grab thousands of dollars in federal and state incentives.

The high lease rate is also fueled by the bet Jablansky and others like him are making that upcoming models will far exceed today’s in value and capabilities. “When there’s new technology coming out, and it’s coming out so rapidly, and you’re improving on it so constantly, typically people only want to lease it,” Steve Center, a vice president of American Honda Motor Co., said in an interview at the 2017 New York Auto Show. The hydrogen fuel cell version of the Honda Clarity isn’t available for purchase; it can only be leased. “Think of your cell phone,” Center explained.

Perhaps electric vehicles will truly arrive when they are no longer compared to smartphones, which become obsolete after three years. 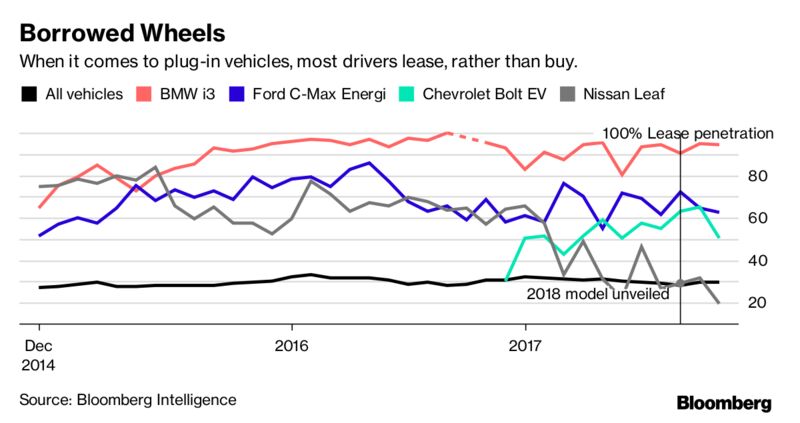 The bet on fast-paced improvements makes sense. In the past five years, battery prices have fallen by an annual average of 20 percent, according to BNEF, as factories scale up and engineers perfect the packaging of cells. “If you look at what can happen across the lifetime of a lease, you’re really talking about doubling the range of these vehicles,” said Edmunds analyst Jeremy Acevedo.

Not surprisingly, a dated plug-in car is a pariah. Electric compact cars that were sold in 2014 are now worth only 23 percent of their original sticker price, compared with 41 percent for comparable combustion vehicles, according to Black Book, an auto analytics firm. A stale Nissan Leaf holds its value about as well as a Florida timeshare.

Part of the problem is that nobody—including auto engineers—really knows how well the first wave of these plug-in cars will age. “The buyer of a used EV today is as much an early adopter as the buyer of a new EV was in 2011,” said Nicholas Albanese, an analyst with BNEF.

Even that, however, doesn’t explain the depth of the discounting for used electric cars. Tim Fleming, an analyst with Kelley Blue Book, sees hints that buyers who are interested in an electric car also put value on driving the newest thing. “Let’s put it this way,” he said, “you don’t buy an EV to save money.”

Although you can do just that with a used model—particularly right now. Consider this 2015 Nissan Leaf, with 5,500 miles on it. At $11,995, it sold for less than one-third of its original price and its battery is under warranty until 2023. For perspective, that’s what the average U.S. driver in the average U.S. vehicle spends on gas alone over an eight-year period. The internet is awash in such offers.

There are strong arguments to be made for a secondhand electric car. For one, a used plug-in should be far more reliable than a gas-fueled car because plug-ins have fewer moving parts and aren’t powered by small explosions. Consumer prices for electricity are far more stable than for gasoline, and even older models can have their efficiency enhanced through remote software updates.

Car companies aren’t overly worried about cultivating a secondary market for electric cars, particularly when the market for new models remains so lackluster. Sales of new models are all that matter when it comes to hitting fleetwide efficiency mandates. That’s one of the reasons most automakers are less than forthcoming about the cost of replacing a battery. “This is a secondary problem for them,” Acevedo said. “All their eggs have kind of fallen in the new-vehicle side of the equation.”

If there is a tipping point in which the electric car market stops behaving like the market for flat-screen televisions, it likely won’t be for two more years. The first Chevy Bolts will come off lease in 2020—roughly 12,000 of them—and analysts expect those cars still to be capable of going about 200 miles on a charge. The market will also start being seeded by a rash of new models: The Tesla Model 3 will be on the road in larger numbers by then, as will the Volkswagen e-Golf and Hyundai Ioniq.

Jablansky has come to love his leased Bolt over the past few months, apart from a few gripes about the thin, squeaky seats. When his lease is up, he might even consider buying it outright. But only if General Motors hasn’t made something far better by then.

—With assistance by Anne Riley Moffat.