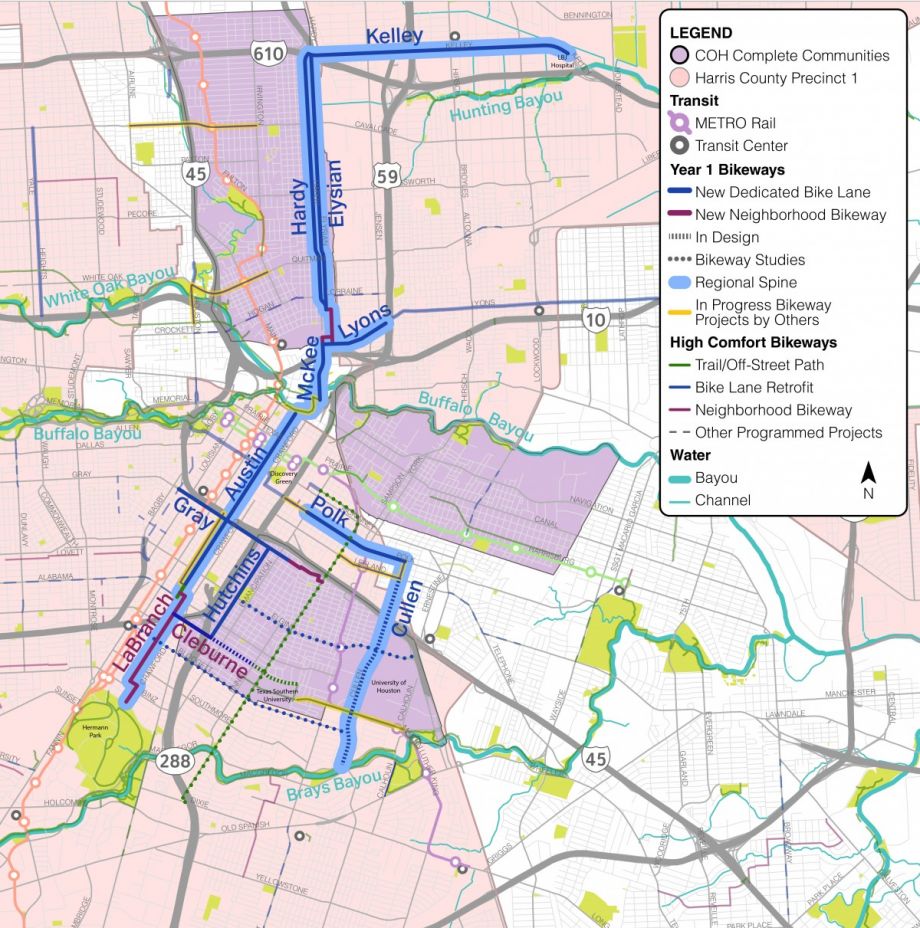 A year later, over fifty new miles of bike lanes and trails now grace roadways, or are under construction, across Houston. And there are more to come. The city is now implementing an ambitious bike plan that calls for, ultimately, 700 miles of on-street lanes.

“Through the 1990s and early 2000s [bike infrastructure] was not a major focus,” says Amar Mohite, who worked on the city’s bike plan before becoming Director of Planning and Infrastructure for Harris County Precinct One. “After 20 years, we had to start from scratch and find a brand new plan.”

The prompt for rethinking the city’s bike infrastructure came in 2013, when then-Mayor Annise Parker issued an executive order mandating the city adopt a complete streets policy over the next 20 years.

A year later, construction started on the Bayou Greenways 2020 project, which aims to connect 150 miles of hike-and-bike trails to parks and neighborhoods across the city’s nine major bayous. (In 2012, 68 percent of voters approved a $166 million bond issue to build it — at the time the best performance of any bond issue in city history.)

These were important shifts in one of the country’s most car-dependent cities, which sprawls over 627 square miles. According to the last Census count, only about 7 percent of city residents walk, bike, or take public transit to work. For years the city only had one protected bike lane cutting through the Central Business District.

Progress came gradually. In 2017, the City Council approved a biking “vision statement” — not a detailed bike plan, but still the city’s first foray in this direction since the mid 90s. The document laid out a vision for 700 miles of on-street bike lanes and 450 miles of off-street trails. The council dedicated $1.1 million per year over four years to begin implementation.

The city, which does not have a dedicated Department of Transportation, started the challenging work of building a detailed bike plan from scratch. Then things intensified further. In 2018, Harris County Precinct One dedicated $10 million to build bike infrastructure in the city limits, from a fund that’s historically supported sprawl infrastructure — with the caveat that it was spent in one year.

While funding set the plan in motion, it’s been challenging to work within tight timeframes, says Jennifer Ostlind, assistant director of the Planning and Development Department. “We were trying to build a program, and it felt like we were building it while we were flying it,” she says.

The Planning and Development Department was tasked with community outreach. “We have to convince people [bike infrastructure] is important, because it’s not always high on their list,” Ostlind says. They started with small community meetings understanding how residents might travel through their communities by bicycle. “It’s taken several months to get people on board and identify priority routes,” she says.

The department identified bicycling networks in several different neighborhoods and has begun lane implementation in partnership with other agencies, like Houston Public Works. In suburban neighborhoods, the department’s strategy was to add trails and bikeways to parks before extending bikeway connections into neighborhoods. “You start changing the culture when people start experiencing that high-quality, safe bike infrastructure,” says Mohite.

The approach has been different in the inner city, where the city is looking to implement lanes to destinations like the Central Business District.

Bike lane planning has led to larger conversations about designing safer streets throughout Houston. “We’ve become more multi-modal in our discussions and concerns for people’s safety in walking, biking, getting to the bus,” says Clark Martinson, executive director for BikeHouston.

Houston residents seem responsive to the increase in bicycling resources. In 2016, Houston BCycle, a bike share service, secured a $3.5 million grant from the Federal Highway Administration, delivered through the Texas Department of Transportation, to fund expansion of the system. This month, ridership was up 65 percent from a year ago, with riders mainly using bikes to replace short car trips. Houston BCycle is now working to add around 35 new stations to underserved communities.

The eventual goal, according to Martinson, is for the city to adopt a Vision Zero policy that aims to eliminate all traffic fatalities and injuries. “We want to reduce all deaths,” he says, “Not just making it safer for people on bikes, but reducing the danger for all roadway users whether in a truck, public transit, riding a bike or walking.”

Emily Nonko is a Brooklyn, New York-based reporter who writes about real estate, architecture, urbanism and design. Her work has appeared in the Wall Street Journal, New York Magazine, Curbed and other publications.