In a city at 50C, the only people in sight are those who do not have access to air conditioning

by Jonathan Watts and Elle Hunt in The Guardian, Mon 13 Aug 2018

Imagine a city at 50C (122F). The pavements are empty, the parks quiet, entire neighbourhoods appear uninhabited. Nobody with a choice ventures outside during daylight hours. Only at night do the denizens emerge, HG Wells-style, into the streets – though, in temperatures that high, even darkness no longer provides relief. Uncooled air is treated like effluent: to be flushed as quickly as possible.

School playgrounds are silent as pupils shelter inside. In the hottest hours of the day, working outdoors is banned. The only people in sight are those who do not have access to air conditioning, who have no escape from the blanket of heat: the poor, the homeless, undocumented labourers. Society is divided into the cool haves and the hot have-nots.

Those without the option of sheltering indoors can rely only on shade, or perhaps a water-soaked sheet hung in front of a fan. Construction workers, motor-rickshaw drivers and street hawkers cover up head to toe to stay cool. The wealthy, meanwhile, go from one climate-conditioned environment to another: homes, cars, offices, gymnasiums, malls.

Asphalt heats up 10-20C higher than the air. You really could fry an egg on the pavement. A dog’s paws would blister on a short walk, so pets are kept behind closed doors. There are fewer animals overall; many species of mammals and birds have migrated to cooler environments, perhaps at a higher altitude – or perished. Reptiles, unable to regulate their body temperatures or dramatically expand their range, are worst placed to adapt. Even insects suffer.

Melting asphalt cause road markings to distort in New Delhi

Maybe in the beginning, when it was just a hot spell, there was a boom in spending as delighted consumers snapped up sunglasses, bathing suits, BBQs, garden furniture and beer. But the novelty quickly faded when relentless sunshine became the norm. Consumers became more selective. Power grids are overloaded by cooling units. The heat is now a problem.

The temperature is recalibrating behaviour. Appetites tend to fade as the body avoids the thermal effect of food and tempers are quicker to flare – along, perhaps, with crime and social unrest. But eventually lethargy sets in as the body shuts down and any prolonged period spent outdoors becomes dangerous.

You could see the physical change. Road surfaces started to melt …

Hospitals see a surge in admissions for heat stress, respiratory problems and other illnesses exacerbated by high temperatures. Some set up specialist wards. The elderly, the obese and the sick are most at risk. Deaths rise.

At 50C – halfway to water’s boiling point and more than 10C above a healthy body temperature – heat becomes toxic. Human cells start to cook, blood thickens, muscles lock around the lungs and the brain is choked of oxygen. In dry conditions, sweat – the body’s in-built cooling system – can lessen the impact. But this protection weakens if there is already moisture in the air.

A so-called “wet-bulb temperature” (which factors in humidity) of just 35C can be fatal after a few hours to even the fittest person, and scientists warn climate change will make such conditions increasingly common in India, Pakistan, south-east Asia and parts of China. Even under the most optimistic predictions for emissions reductions, experts say almost half the world’s population will be exposed to potentially deadly heat for 20 days a year by 2100.

Not long ago, 50C was considered an anomaly, but it is increasingly widespread. Earlier this year, the 1.1 million residents of Nawabshah, Pakistan, endured the hottest April ever recorded on Earth, as temperatures hit 50.2C. In neighbouring India two years earlier, the town of Phalodi sweltered in 51C – the country’s hottest ever day.

Dev Niyogi, professor at Purdue University, Indiana, and chair of the Urban Environment department at the American Meteorological Society, witnessed how cities were affected by extreme heat on a research trip to New Delhi and Pune during that 2015 heatwave in India, which killed more than 2,000 people.

“You could see the physical change. Road surfaces started to melt, neighbourhoods went quiet because people didn’t go out and water vapour rose off the ground like a desert mirage,” he recalls.

“We must hope that we don’t see 50C. That would be uncharted territory. Infrastructure would be crippled and ecosystem services would start to break down, with long-term consequences.”

Several cities in the Gulf are getting increasingly accustomed to such heat. Basra – population 2.1 million – registered 53.9C two years ago. Kuwait City and Dohahave experienced 50C or more in the past decade. At Quriyat, on the coast of Oman, overnight temperatures earlier this summer remained above 42.6C, which is believed to be the highest “low” temperature ever recorded in the world.

At Mecca, the two million hajj pilgrims who visit each year need ever more sophisticated support to beat the heat. On current trends, it is only a matter of time before temperatures exceed the record 51.3C reached in 2012. Last year, traditionalists were irked by plans to install what are reportedly the world’s biggest retractable umbrellas to provide shade on the courtyards and roof of the Great Mosque. Air conditioners weighing 25 tonnes have been brought in to ventilate four of the biggest tents. Thousands of fans already cool the marble floors and carpets, while police on horseback spray the crowds with water.

Football supporters probably cannot expect such treatment at the Qatar World Cup in 2022, and many may add to the risks of hyperthermia and dehydration by taking off their shirts and drinking alcohol. Fifa is so concerned about conditions that it has moved the final from summer to a week before Christmas. Heat is also why Japanese politicians are now debating whether to introduce daylight saving time for the 2020 Tokyo Olympics so that marathon and racewalk athletes can start at what is currently 5am and avoid mid-afternoon temperatures that recently started to pass 40C with humidity of more than 80%.

At the Australian open in Melbourne this year – when ambient temperatures reached 40C – players were staggering around like “punch-drunk boxers” due to heatstroke. Even walking outside can feel oppressive at higher temperatures. “The blast of furnace-like heat … literally feels life-threatening and apocalyptic,” says Nigel Tapper, professor of environmental science at Melbourne’s Monash University, of the 48C recorded in parts of the city. “You cannot move outside for more than a few minutes.”

Those places already struggling with extreme heat are doing what they can. In Ahmedabad, in Gujarat, hospitals have opened specialist heat wards. Australian cities have made swimming pools accessible to the homeless when the heat creeps above 40C, and instructed schools to cancel playground time. In Kuwait, outside work is forbidden between noon and 4pm when temperatures soar.

But many regulations are ignored, and companies and individuals underestimate the risks. In almost all countries, hospital admissions and death rates tend to rise when temperatures pass 35C – which is happening more often, in more places. Currently, 354 major cities experience average summer temperatures in excess of 35C; by 2050, climate change will push this to 970, according to the recent “Future We Don’t Want” study by the C40 alliance of the world’s biggest metropolises. In the same period, it predicts the number of urban dwellers exposed to this level of extreme heat will increase eightfold, to 1.6 billion.

As baselines shift across the globe, 50C is also uncomfortably near for tens of millions more people. This year, Chino, 50km (30 miles) from Los Angeles, hit a record of 48.9C, Sydney saw 47C, and Madrid and Lisbon also experienced temperatures in the mid-40s. New studies suggest France “could easily exceed”50C by the end of the century while Australian cities are forecast to reach this point even earlier. Kuwait, meanwhile, could sizzle towards an uninhabitable 60C.

How to cool dense populations is now high on the political and academic agenda, says Niyogi, who last week co-chaired an urban climate symposium in New York. Cities can be modified to deplete heat through measures to conserve water, create shade and deflect heat. In many places around the world, these steps are already under way. 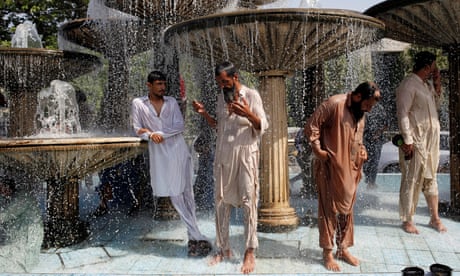 Heat: the next big inequality issue

The city at 50C could be more tolerable with lush green spaces on and around buildings; towers with smart shades that follow the movement of the sun; roofs and pavements painted with high-albedo surfaces; fog capture and renewable energy fields to provide cooling power without adding to the greenhouse effect.

But with extremes creeping up faster than baselines, Niyogi says this adapting will require changes not just to the design of cities, but how they are organised and how we live in them. First, though, we have to see what is coming – which might not hit with the fury of a flood or typhoon but can be even more destructive.

“Heat is different,” says Niyogi. “You don’t see the temperature creep up to 50C. It can take people unawares.”

Which cities are liveable without air conditioning – and for how much longer?

Last summer I mapped the cities of the world where the residents can live comfortably without heating or air conditioning.

Working with Guardian Cities to scale up the original survey using data from the US National Oceanic and Atmospheric Administration, we broke the world’s cities into four categories.

The good news is that, if you want to go air conditioning-free, you have options on every single continent. The bad news is that this may not be the case forever.

Using data from the Climate Impact Lab, we have modelled how climate change might affect temperatures globally, making more people dependent on air conditioning in cities where it is currently strictly a luxury.

Average temperature between June and August, 1986-2005

Average temperature between December and February, 1986-2005

The two maps show how average summer temperatures are predicted to rapidly increase in both hemispheres over the next 40 years. In the northern hemisphere, hotter temperatures will creep towards the Arctic circle, while much of northern Africa and the Middle East will see average temperatures climb above 35C (95F) between June and August.

In the southern hemisphere the hottest temperatures occur between December and February. In the next 20 years South American countries such as Argentina and Bolivia are forecast to have average summer temperatures above 35C for the first time since records began.

Whether we face the challenge through international efforts, designing for cooler cities, or by moving to those cities that are naturally temperate, it’s clear we will all need to think more about heat in the coming century.