Conclusions from a series on Bits of Science, about the global temperature trend:

The below graph shows 4 different temperature trends, against the observed rise of the atmospheric CO2 concentration: 1) observed temperatures (plus annual & 30-year average), an RGT trend based on ‘consensus climate sensitivity’, an RGT trend filtering ocean thermal inertia, and an RGT trend based on long-term ‘Earth System Sensitivity, deduced from Pliocene & Eocene paleoclimate. It shows that at the current CO2 concentration, atmospheric warming could still double: 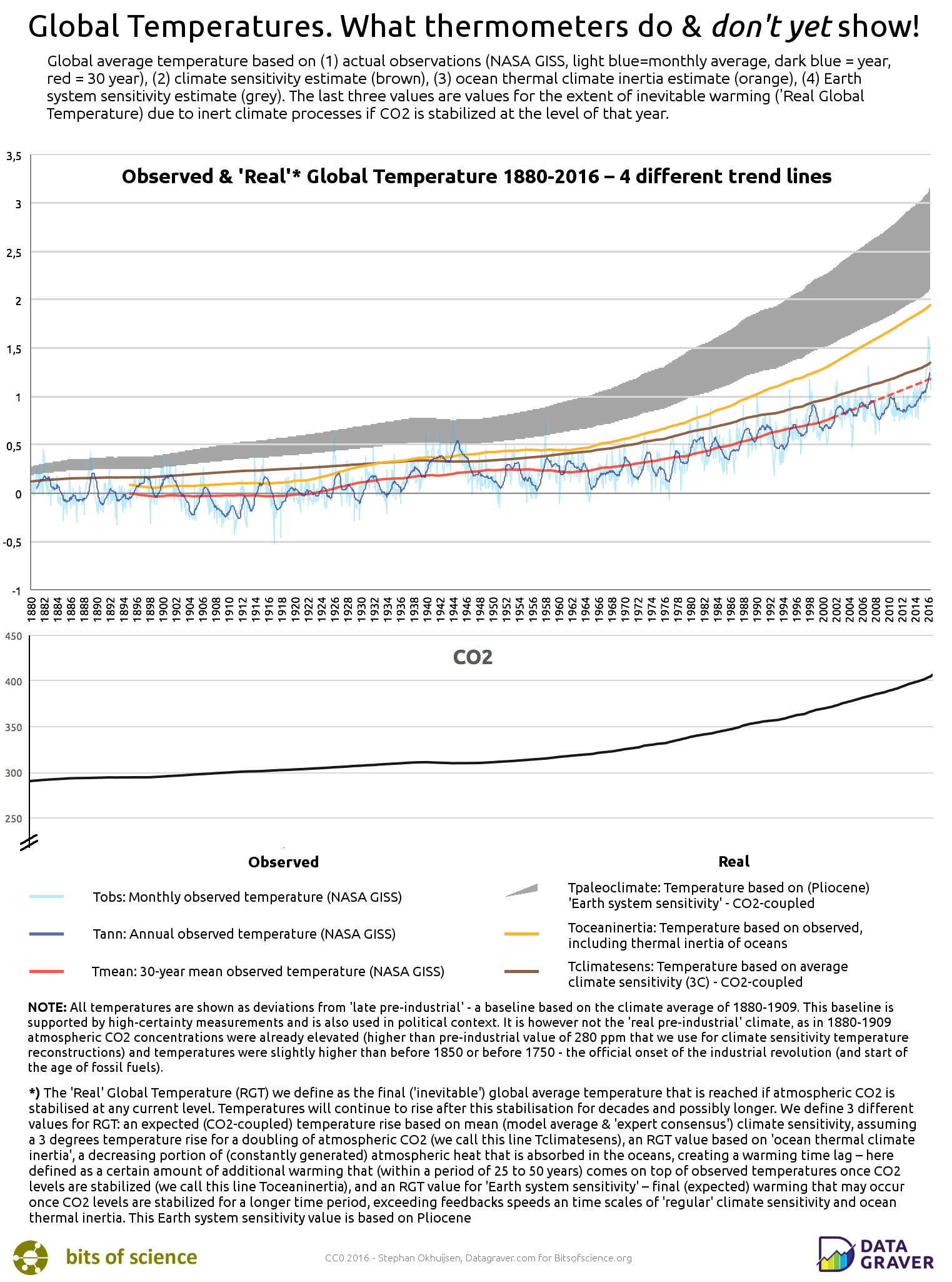 [DISCLAIMER: to create above graph we had to make several assumptions, which are explained throughout this article. One thing that deserves special attention is that we draw climate sensitivity as a direct line between preindustrial CO2 (280ppm) and doubled CO2. It’s a nice linear line, but an oversimplification and not correct. In reality warming increases logarithmically with CO2 – the line starts and ends at the same spot, but ought to be more convex shaped in between. The difference is quite large. We use as formula [Tcs = Tpre-indus + ((CO2 – 280)/280) x 3] to get to +1.39 Celsius in 2016. It should be according to [forcing = 5.35*ln(CO2/CO2_ref)] – therefore at 400ppm you already get 51% of warming, so +1.54 degrees. This means the line for Tclimatesens should be higher than graphed above.]

How do recent heat records compare to the global temperature trend?

2014, 2015 and 2016 subsequently broke all the world’s temperature records. That’s why at Bitsofscience.org we started a 25-part series investigating the climate science behind the warming – with one important question: are these ‘insane temperature records’ really peaks on the trend line (as observations suggest), or are we somehow underestimating the warming potency of CO2 and are these temperature ‘peaks’ mere corrections to a higher ‘real’ global temperature trend…?

Today, after quite a lot of hard work, we present the conclusions. We would like to thank the many climate scientists who kindly and freely helped us with this investigation – and the many more whose invaluable (ongoing) research we could draw from!