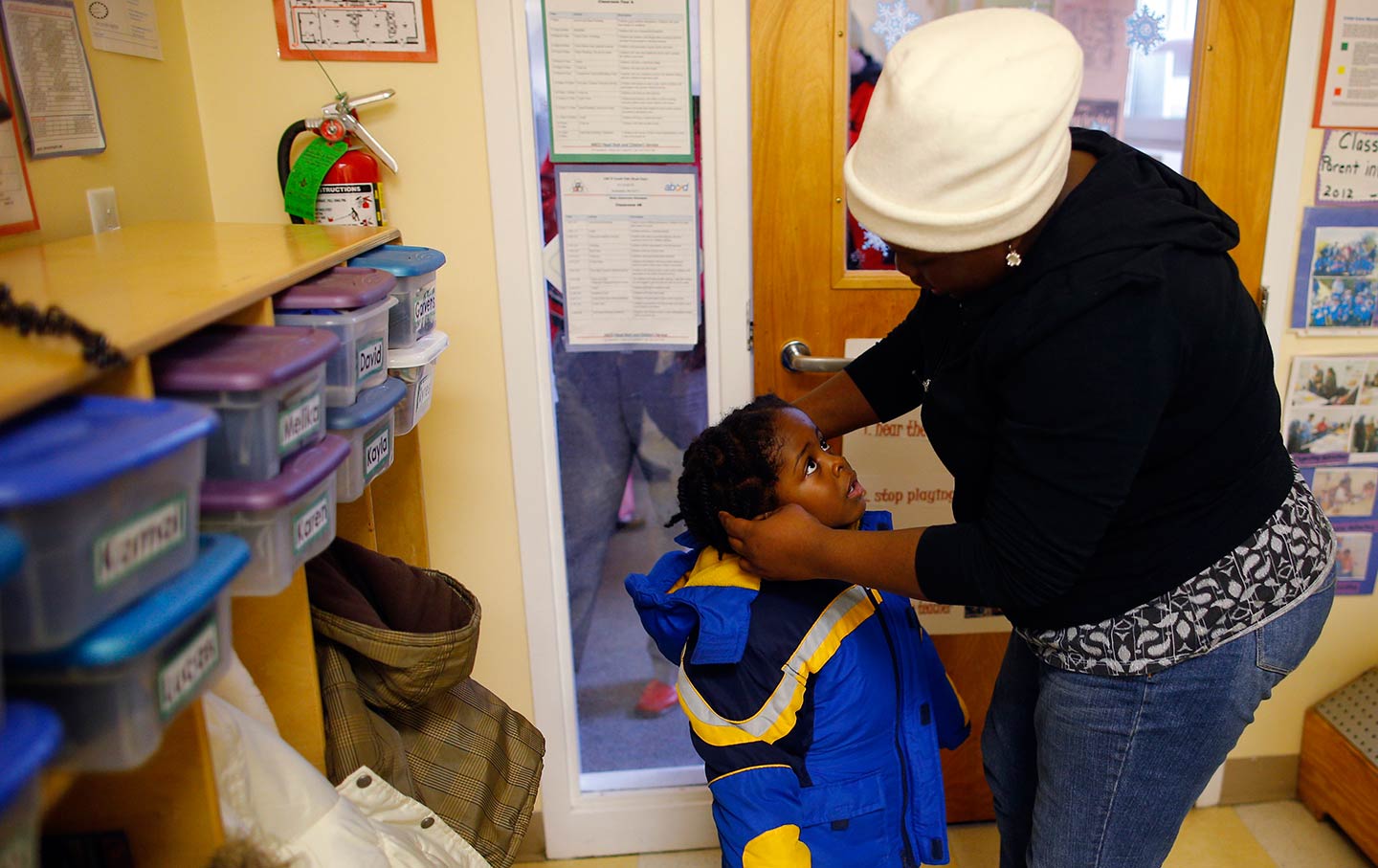 A mother picks up her 4-year-old son from a Head Start program in Boston, Massachusetts, March 2013. (Reuters / Brian Snyder)

When Tasheva was 11 years old, she was left alone with her four younger siblings in her family’s New York City apartment. As kids who are left alone often do, they got into a little (innocent) trouble. “We threw water balloons out of our window,” Tasheva said, a smile breaking through the corners of her pursed lips. The balloons landed on a neighbor’s terrace, and the the police were called. “The police showed up at our apartment, asked us if we were alone were there any adults in the house,” she later told me over the phone. After the officers confirmed that the children were alone, Tasheva remembers them being taken to the precinct station, where ACS workers showed up. “It was like we were in custody with  ACS [Administration for Children Services] at that point,” she says. Days later, Tasheva and her siblings were taken from their mother’s home and put into foster care where, the 44-year-old says, her life changed irrevocably—for the worse.

Foster care proved to be a very unsafe place for Tasheva. Tasheva says she was raped for the first time by her foster-care brother at age 14; two years later, he would impregnate her. In response, her foster-care mother encouraged her to have an abortion and offered to put a lock on her door.

Tasheva told her story to a crowd of over 100 people at the New School last week during a panel put on by the nonprofit Child Welfare Organizing Project on the connections between mass incarceration and the child-welfare system. Like the criminal-justice system, the child-welfare system overwhelmingly pulls in poor Americans, a disproportionate number of whom are people of color. Ninety-three percent percent of the 11,500 youth in the New York City’s child-welfare system are black and Latino. “Poor people are seen as out of place and in need of supervision,” said Andrea Morrell, a professor at Guttman Community College in New York City who studies criminal justice and worked in child welfare for many years. The level of surveillance black and brown women face is similar to that experienced by black and brown boys and men—in schools, playing in parks, going to work, sitting at home, shopping for food—but instead of arrests, jail, and long prison sentences, the result, for women, is what is commonly called “catching a case.” “Catching a case” means being investigated by a child -welfare agency and possibly having your child taken out of your home and put into foster care. In some cases, that leads to getting your child permanently taken from you.

There are so many ways to “catch a case,” Morrell told the audience—women can be reported to ACS “by the police, by social workers, by teachers and school administrators, by parole officers, NYCHA security, welfare caseworkers, ACS workers, and not to mention [mothers’] neighbors and their bosses.” According to an annual report, ACS conducted 5,579 investigations between January and December in 2017 and 3,971 children were placed in care. Often, the mother’s biggest crime is poverty—in New York City the vast majority of youth are taken from their parents’ care not for allegations of abuse, but for neglect. The New York Times tells the story of Maisha Joefield, who was taking a bath when her 5-year-old daughter left the apartment in search of her great-grandmother’s house, across the street. ACS removed her daughter from her home and placed her into foster care, and Joefield was charged by police with endangering the welfare of a child. It can quickly become nearly impossible for a mother to extract herself from the system, as it was in Joefield’s case. “This surveillance is not neutral. Once [you’re] entangled in this web of punitive social systems it can take years to get one’s head above water,” said Morrell.

For many, foster care feels like a foregone conclusion: “I was born to a 14-year-old black mother, so I was already foster-care bound,” said Gerald Campbell, a 40-year-old who spent much of his youth in foster care. A report by the Schuyler Center confirms his view: “Children born to teen parents are more likely to enter foster care or have multiple caretakers throughout their childhood.” The Schuyler Center also notes that “Adolescents in foster care and those who age out are at increased risk of pregnancy compared to their peers.”

And it’s cyclical. According to report put out by Rise magazine, 25 to 40 percent of parents with children in care were in foster care themselves. A few years ago a neighbor called ACS to report Tasheva, who at this point had children of her own. “They went in my cabinets,” she said of the case worker, who made her 15-year-old son strip to make sure there were no scars on him, after he assured her there were not. “He was embarrassed,” she said of her teenage son having to strip down naked in front of his mother and a stranger. Tasheva choked back tears recalling the havoc it wreaked on her family that weekend. ACS didn’t ultimately remove her children, but she still feels trauma and fear she from the three-day ordeal. “I told them, over my dead body,” she recalls saying to the ACS workers about removing her children from home.

Morell quoted from the 2016 book Catching a Case: Inequality and Fear in New York City’s Child Welfare System, by Tina Lee, an associate professor of anthropology at the University of Wisconsin—Stout: “Caseworkers actually combine two roles: investigator and helper. These two roles are inevitably in tension.” Morell added, “Taken together, we understand that many of our social institutions—that in name, or in some aspect of their design, helping institutions—are functioning as institutions of punishment.”

Many mothers who lose their children to foster care are expected to take classes to “improve” their parenting. But experts on the panel said the classes served more as surveillance than education. “The exhaustive list of classes for parents is akin to parole: are we using these hoops as a checklist to maintain surveillance over a family home, rather than a real, substantive check in to a person’s well-being?” asked Morrell. “Are we guided by a gendered presumption that poor women, Black women, Puerto Rican women, Mexican women, certain categories of immigrant women, are by nature unfit parents and need a prescribed skill set of lessons to be judged adequate?”

Between 2009 and 2014, there was a 44 percent drop in the number of children removed from their parents or caretaker’s homes in New York City. But there are no signs of a radical shift taking place to address these larger issues. In fact, last year, The New York Times pointed out the myriad ways black women are impacted by the child welfare system, dubbing the issue, “The New Reality of ‘Jane Crow.’” The Times reported that requests for removals filed in New York City’s family court rose 40 percent in the first quarter of 2017, to 730 from 519, compared with the same period the previous year.

Morrell was unequivocal about solutions: more resources for underserved parents. “I became a product of my environment,” said Gerald, who ended up in jail (foster-care youth are more likely than their peers to end up incarcerated). “They need to teach the family how to get help,” he said choking back tears, “They’re under-resourced parents.”

Editor’s Note: This article earlier misidentified Tasheva’s last name. The incorrect name has been removed. Tasheva has requested that her last name not be included.