Researchers at the Stockholm Environmental Institute and EarthTrack found in 2017 that 45 percent of new crude oil resources would be unprofitable to develop without public subsidies. A 2019 paper in Nature found that just one type of subsidy—the subsidy that allows producers to write down costs from new wells—makes new drilling projects seem far cheaper than they appear, bringing down break-even costs by as much as $7 per barrel of oil. Removing that subsidy and making new drilling economically unviable could keep up to 300 million tons of carbon dioxide from being released into the atmosphere in 2030. To keep such a thing from happening, fossil fuel companies make generous contributions to lawmakers, particularly Republicans. 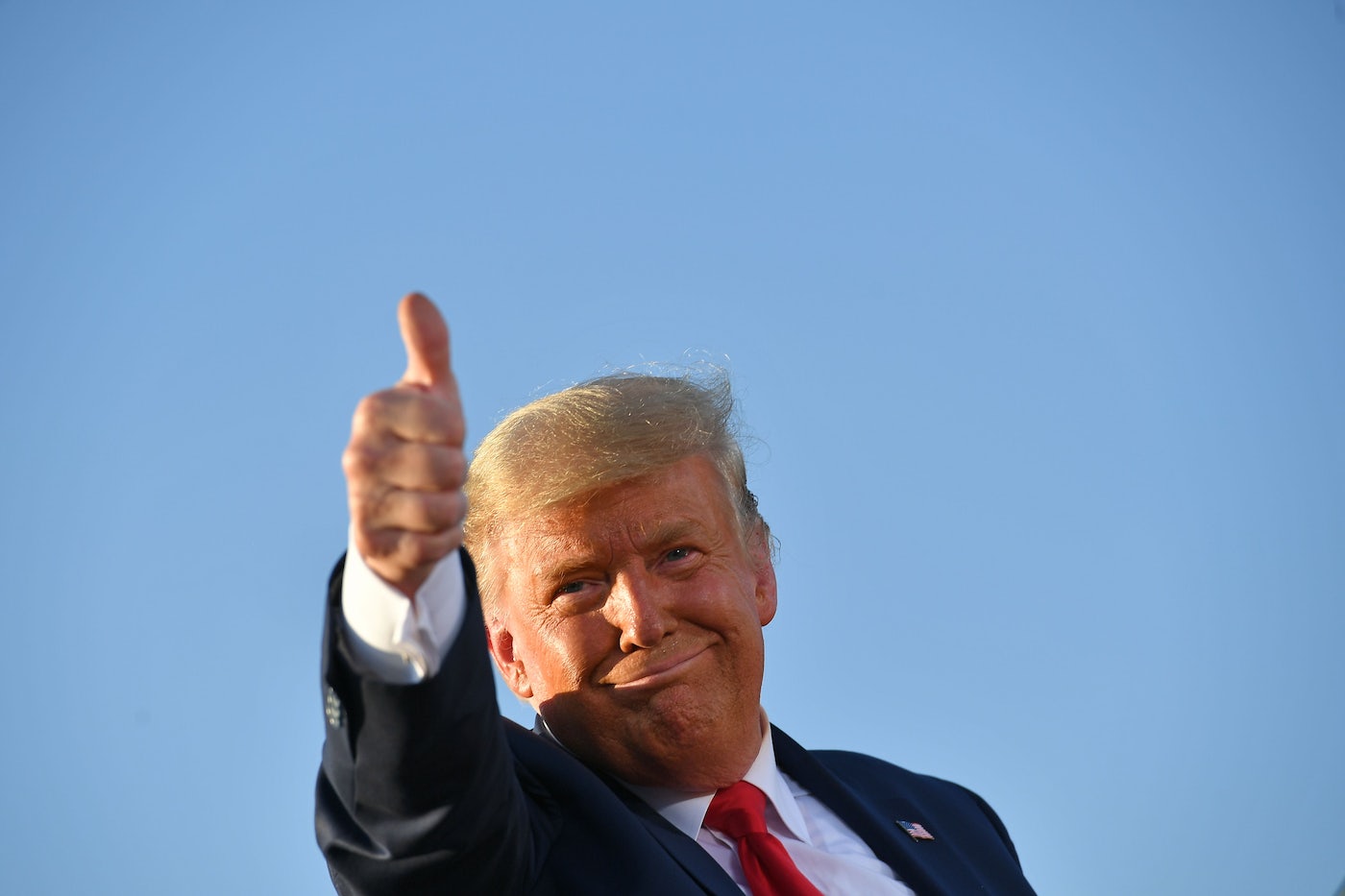 Donald Trump didn’t actually give Exxon drilling permits in exchange for $25 million in campaign donations. He just wants you to know that he could, if he wanted to. That was the message behind a viral clip of the president at a rally on Monday, in which he said he’d “call the head of Exxon,” and say, “How are you doing, how’s energy coming? When are you doing the exploration? Oh, you need a couple of permits, huh? … You know, I’d love you to send me $25 million for the campaign.” He could say that.

As a #QuidProQuo hashtag materialized, many wondering whether the president had openly admitted to a crime, reporters pointed out that this extortion scenario had been phrased as a hypothetical. “We are aware of the President’s statement regarding a hypothetical call with our CEO,” ExxonMobil’s official account tweeted Monday evening. “And just so we’re all clear it never happened.” The tweet earned the oil giant applause from some liberals for “fact-checking” the president, and a few welcomed the company to the “resistance.”

Beneath Trump’s hypothetical, though, lies an unsettling truth: The U.S. government has a toxic relationship with the fossil fuel industry. The oil and gas sector was built and survives on a sturdy foundation of state support. While Trump may not (yet) have openly extorted Exxon’s CEO, the government-corporate partnership is rotten to its core.

The Seven Sisters oil companies—now consolidated into ExxonMobil, BP, Shell, and Chevron—relied on imperial concessions throughout much of the global south to maintain their cartel over some 85 percent of the world’s oil resources through much of the twentieth century. When local governments threatened that control, the companies turned to the CIA to help protect their property.

Nowadays those helping hands are a bit more subtle. The Obama administration’s Global Shale Gas Initiative, for instance, deployed tremendous diplomatic resources to sell U.S. fossil fuels to the world as the shale boom took off. After oil prices crashed in 2014, Congress—prodded by the industry—lifted a 40-year-old ban on crude oil exports to give them a second life. In one particularly egregious example of government fossil fuel cheerleading at the state level, Democratic Pennsylvania Governor Tom Wolf is now under federal investigation for allegedly firing a top state environmental regulator who threatened to deny a permit to Energy Transfer LP for its Mariner East 2 Pipeline. Wolf has continued to champion the pipeline throughout the investigation.

That’s all on top of the more obvious support those companies receive in the form of generous tax breaks and dirt-cheap leases on public lands, where existing drilling accounts for a quarter of all greenhouse gas emissions produced in the United States. Researchers at the Stockholm Environmental Institute and EarthTrack found in 2017 that 45 percent of new crude oil resources would be unprofitable to develop without public subsidies. A 2019 paper in Nature found that just one type of subsidy—the subsidy that allows producers to write down costs from new wells—makes new drilling projects seem far cheaper than they appear, bringing down break-even costs by as much as $7 per barrel of oil. Removing that subsidy and making new drilling economically unviable could keep up to 300 million tons of carbon dioxide from being released into the atmosphere in 2030.

To keep such a thing from happening, fossil fuel companies make generous contributions to lawmakers, particularly Republicans. Eighty-five percent of fossil fuel donations this cycle have gone to Republicans, according to the Center for Responsive Politics. But companies are starting to spend more of their money courting Democrats. Exxon, for instance, has directed 41 percent of its political contributions this year to Democratic Party–aligned candidates and PACs, up from the 32.6 percent of funds it offered in 2016.

As a political entity, Exxon at this point is closer to a NeverTrump Republican than the cartoonish, climate-denying supervillain it was a decade ago, when it funded junk-science research into whether the sun was to blame for climate change and papers arguing that more carbon dioxide emissions might actually be good. Today, you’d be as hard-pressed to find a fossil fuel executive spouting Trump-like lines that climate change is a hoax as you would to find one pushing back against his regulatory rollbacks. Oil companies’ rhetorical shift, that is, hasn’t been accompanied by much substantive change in their business strategy. As Bloomberg reported recently, Exxon, despite its new green messaging, was planning as of this past January to increase its annual emissions by 17 percent by 2025 and is still giving lavishly to keep Republicans in control of the Senate.

Fossil fuel companies are rational actors in the short term: They pay for results. There’s not much incentive for them to throw money at a presidential candidate lagging in the polls. And given the GOP’s quasi-religious fealty to their sector, there’s also not much risk that Republicans would turn on them for throwing a few bones like a winking tweet or a few hundred thousand dollars to Democrats. Republicans will love the oil industry either way, and continue showering it with giveaways.

Facing declining financial prospects and potential Democratic Party control at the federal level, the industry’s task now is a more complicated one than it was a decade or two ago, when it could stall with junk science while growing prodigiously. Now it has to convince policymakers of a few related stories: first, that it can be a good-faith actor in debates about climate policy, wholeheartedly interested in finding a solution to the problem; second, that it offers invaluable resources and expertise that policymakers couldn’t possibly do without; and third, that those experts, in turn, are recommending policy in good faith that just happens to preserve their industry’s profitability for decades to come.

In other words, fossil fuel companies have to convince Democrats to trust them—against every shred of historical evidence that their sole mission for nearly half a century has been to delay and obstruct policy at the scale and speed of the problem. Bizarrely, there are still plenty of Democrats willing to believe them and reticent to go after the companies’ bottom lines.

The stakes for the industry are enormous. It is keen not only to avoid new constraints on its ability to drill but to maintain the exorbitant amount of state support that keeps it going. Lawmakers could deal a heavy blow to the industry by stripping back the tens of billions of dollars a year it gets in subsidies at the state and federal level that inflate its value—and that’s before you even get to properly enforcing the Clean Air Act.

Trump didn’t literally exchange permits for campaign donations. Whether a Biden administration and Democratic Congress would put an end to the U.S. government’s broader quid pro quo with polluters still remains to be seen.Kate Aronoff @KateAronoff

Kate Aronoff is a staff writer at The New Republic.