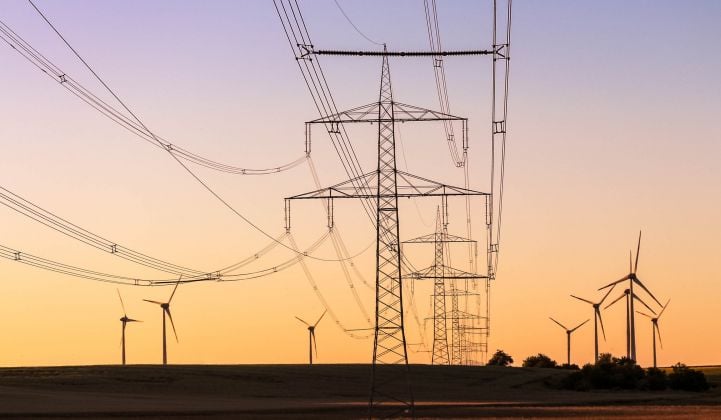 Dynamic line rating can find unused capacity, test health of transmission systems, if utilities and regulators can set rules for using it, and investing in it. 0

A big part of the world’s electricity decarbonization challenge lies in expanding transmission capacity for wind and solar power — and according to energy experts, Europe and the U.S. are falling behind on that task. Solving this problem will require a lot of new transmission on land and at sea. But using existing grid infrastructure more efficiently could help as well.

That’s what dynamic line rating technologies do, by measuring high-voltage transmission line capacity in real-time, as opposed to relying on static measurements. Using DLR could reduce costly grid congestion and speed interconnection of renewables, according to a decade of pilot projects and studies.

But knowing this isn’t enough, he said. Utilities and grid operators must integrate this kind of data into grid operations and markets to make it effective, and regulatory structures that reward grid investments need to change to incentivize more efficient operations as well.  TOP ARTICLES

Moving Organizations to Carbon Neutrality: The Role of Carbon Offsets

The value of DLR is well established. Belgian grid operator Elia has been testing it since 2008, and results indicate the 5 to 20 percent increase in ratings it can discover can improve market dispatch cost-effectiveness and increase integration and reduce curtailment of solar and wind power, according to a 2020 report from International Renewable Energy Agency (IRENA).

U.S. Department of Energy tests over the past decade have found similar results, according to a 2019 report to Congress. Texas utility Oncor and the New York Power Authority found average real-time transmission capacity at least 30 percent greater than static ratings, and sometimes much higher, according to analysis from Rob Gramlich, founder and president of research group Grid Strategies. Improvements like these could slash U.S. transmission grid congestion costs, which the group estimates have risen from $6.2 billion in 2016 to $8.3 billion in 2018.

DLR could be particularly valuable for wind power, which makes up much of the variable generation that’s being curtailed in wind-rich parts of the U.S. grid. That’s because temperature is the main variable for power line capacity, and wind speed is a primary determinant of temperature. In other words, the same variable that increases wind power generation capacity can also boost the capacity of power lines carrying it to market, Gramlich noted.

Over the past decade, DLR technology providers have been fine-tuning their platforms to deliver more actionable data for grid operators. Ampacimon has deployed its line-mounted systems on more than 50 transmission lines with five North American utilities including Arizona Public Service and New York Power Authority. Lindsey Systems has installed its sensors on power lines operated by utilities including National Grid and Hydro Quebec.

How utilities are planning to put DLR to work

LineVision’s sensors, installed at the base of transmission pylons, use electromagnetic field and lidar sensors to capture power line electrical and physical data. That includes measures of line sag and sway under different temperature and wind conditions to assess risk of lines hitting trees or other structures during storms or high winds, as well as weathering and aging data to inform utility inspection and replacement regimes.

This is a valuable safety feature in a world where power grid failures are causing deadly wildfires, Gilmer noted. More than half the U.S. transmission infrastructure is more than 30 years old, and “utilities just don’t have good tools to deal with this.”

(A LineVision sensor, with LIDAR and EMF sensors and solar panel for power. Credit: LineVision)

This asset health use case is now being tested by National Grid, Terron Hill, the utility’s director of asset development, told GTM. The hope is that sensor data can augment the helicopter overflights and on-the-ground inspections it and other transmission operators use today, far more frequently and at a much lower cost.

National Grid is also working with LineVision, Lindsey, and other transmission technology vendors including Ampacimon and Smart Wires, to test how they can help it solve renewables integration challenges in its Northeast U.S. territories, he said.

In interconnection studies, “we take a very conservative view, to make sure the safety of the network is never compromised,” Hill said. “In many cases, there sometimes isn’t enough capacity.” Dynamic line ratings, along with broader grid operational changes, could allow new renewables to be interconnected and managed to reduce grid impact only “during certain hours of the year under constrained conditions.”

Like many utilities, National Grid faces multiple renewable integration challenges, from getting wind and hydropower from Canada and upstate New York to New York City and other downstate load centers, to interconnecting the gigawatts of new solar being built under the Solar Massachusetts Renewable Target (SMART) program.

To be clear, DLR isn’t a “panacea” for renewable integration, he said. National Grid has pledged to reach Scope 1 and 2 net-zero emissions by 2050, joining an increasing number of U.S. utilities with similar decarbonization goals. The renewable growth involved in reaching that goal will take “a tremendous amount of new transmission investment,” as well as new energy storage capacity, and other important steps, he said.

Even so, “I see things like dynamic line rating devices as being one of those key things that allow us to connect renewables more quickly and at lower cost.”

Getting the grid policies in place for DLR

DLR has been tested by most of the independent system operators (ISOs) and regional transmission organizations (RTOs) that manage transmission networks serving about two-thirds of the country’s electricity supply. But integrating it into the day-to-day operations will take a lot of work on modernizing the energy management systems (EMS) that run transmission grids, and creating the market structures that incorporate that flexibility, Hill noted.

European transmission system operators are ahead of their U.S. counterparts in DLR integration, according to IRENA. In the U.S., the Federal Energy Regulatory Commission (FERC) is examining ways to incentivize “grid-enhancing technologies,” including DLR, to overcome the lack of financial incentive for improving the efficiency of existing transmission networks.

Renewable energy projects are “awaiting interconnections because of the inefficiency of the transmission we have,” Jon Wellinghoff, FERC chairman from 2009 to 2013 and CEO of Grid Policy, told GTM. “If we start providing developers with incentives to improve that efficiency, we’ll see interconnections will happen much more quickly, more smoothly, and at a much lower cost.”

While President-elect Joe Biden’s most aggressive clean energy plans may face roadblocks from Republicans in Congress, transmission development could be a realm where federal policymakers could align, Gilmer noted. “Modernizing our grid, especially using advanced technologies, is an area that both sides of the aisle can agree on.”

Last month, FERC opened a notice of proposed rulemaking (NOPR) that could expand DLR into transmission grid operations as well, depending on how it’s finalized. The proposal mainly focuses on requirements for “ambient adjusted ratings,” or using forecasted temperatures to alter static ratings, in ways that are less fine-grained than DLR.

At FERC’s Nov. 19 meeting, Commissioner Richard Glick suggested the NOPR “should also take a serious look at dynamic line rating.” FERC’s Dillon Kolkmann, the author of a 2019 report on the subject, noted that a full switch to DLR “presents additional costs and challenges that ambient adjusted ratings do not,” namely the sensors, software, operational and cybersecurity upgrades to enable it.

Still, he noted that the NOPR proposes requiring ISOs and RTOs to allow hourly condition updates in their wholesale energy market platforms. That’s a necessary precondition for putting DLRs to use, and could allow grid operators to use them, “if they choose to do so.”

Leveraging Coronavirus Stimulus to Take a Giant Leap Toward Decarbonization