This grid technology could make or break Biden’s solar plans 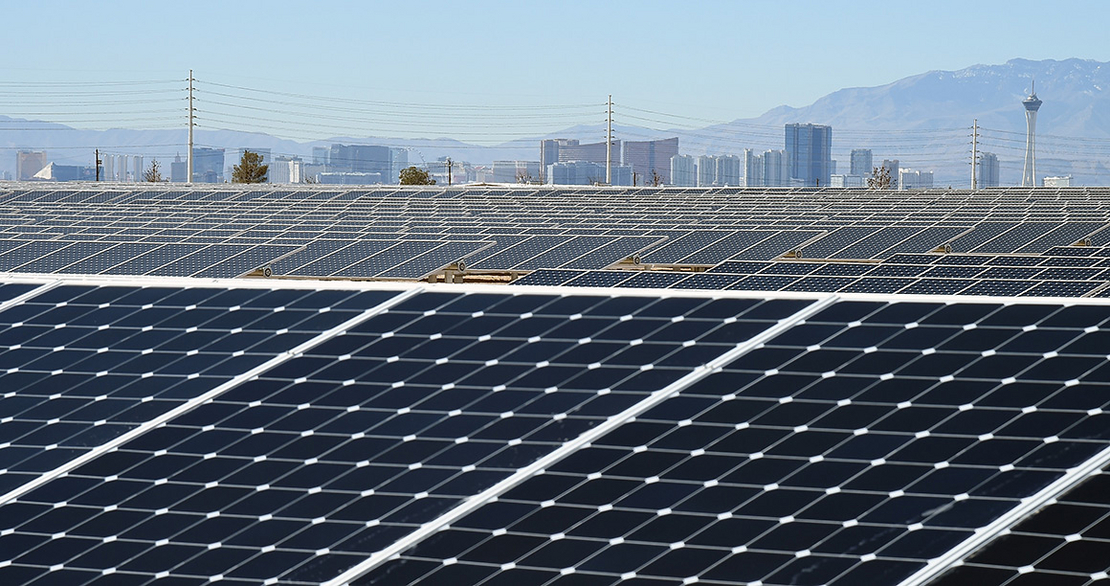 President Biden’s blueprint for 40 percent solar power may depend partly on development of inverter technology for the electric grid that is not yet available. Solar panels in Las Vegas are pictured. Ethan Miller/Getty Images

President Biden’s blueprint for getting 40 percent of the nation’s electricity from solar power by 2035 depends on development of a device that would take the place of fossil fuel plants in setting the heartbeat of power grids, experts say.

Called a grid-forming inverter, the tool is a combination of electronics and software and could also enable solar panels on millions of homes to help restore a blacked-out power network like that left behind in Louisiana and Mississippi after Hurricane Ida. Today, solar panels cannot serve that role.

Inverters are electronic devices that convert the steady stream of direct current from wind and solar generation, and from batteries, into the tightly controlled up and down waves of alternating current that deliver the grid’s energy. Solar and wind units are currently built with inverters that have some “smart” digital capabilities to support grid reliability. But they “follow” or adapt to the existing grid AC conditions and do not have the “grid-forming” capabilities envisioned by researchers.

“The study illuminates the fact that solar, our cheapest and fastest-growing source of clean energy, could produce enough electricity to power all of the homes in the U.S. by 2035 and employ as many as 1.5 million people in the process,” Energy Secretary Jennifer Granholm said in a statement.

Today, the grid’s AC beat is set by the generators of conventional plants — coal and natural gas units, nuclear reactors, and hydropower. As their presence shrinks, however, wind and solar resources must be able to take on that role as the grid approaches the high levels of solar power called for by Biden, said Ben Kroposki, director of the power systems engineering center at the National Renewable Energy Laboratory (NREL), a leader of the DOE-backed consortium.

A grid-forming inverter would go beyond existing smart versions and have additional software controls that allow it to “go first, not follow” existing grid conditions, helping to establish and maintain a stable flow of alternating current at precise voltage and frequency levels across the nation’s three vast synchronized power networks, like an orchestra conductor beating out an ensemble’s tempo.

Development of standardized, fail-safe advanced grid-forming inverters that utility engineers trust is one of the key innovations needed to deliver on commitments for carbon-free power, according to researchers.

“The challenge really comes when you start to get much higher levels [of renewable power] — any more than 50 percent inverter-based power. You don’t know if you have enough … conventional power plants left” to maintain grid stability, Kroposki said.

The new inverters must be able to create the conditions on their own, Kroposki said.

“We need a significant portion of the inverter-based devices to have this grid-forming capability to maintain stable operations,” Kroposki said in an interview.

“We’re probably only about five years ahead of where we need to be,” he added, assuming the growth of solar power comes close to the Biden administration’s blueprint.

Advanced inverters could also allow solar or wind units of any size to help restart parts of the power grid shut down by natural disasters or cyberattacks, Kroposki said.

“Unfortunately, if you have solar on your roof and grid-following inverters, but the grid is down, you will not be getting power out of those panels,” he said. “Some of the newer inverters … can provide enough energy to charge a cell phone, but it won’t power your house.”

Other members of the new consortium include the University of Washington and the Electric Power Research Institute (EPRI), and it has support from other national labs, universities and industry researchers.Its goal is to create a standard for the controls that all manufacturers will follow and to show the economic value of the technology to grid operators.

“It’s a unique piece we’re just now developing. We hope this will set the rules of the road,” Kroposki said.

One senior official of a grid equipment manufacturer, who agreed to speak on background,questioned the potential for grid-forming inverters to maintain stable power flows when renewable power levels get above 70 percent of generation. “We’ve been experimenting with it for several years,” the official said. “It’s just in the early stages. I don’t know if there is a way to do it in a purely renewable system.”

The new consortium’s job is to answer such questions, said Daniel Brooks, vice president for integrated grid and energy systems at EPRI.

The initial DOE grant is seed money to get the project started, he said. It will go toward testing and evaluation to determine how the advanced inverters would work in operation, so that large grid networks remain synchronized and reliable, he added.

“After five years, the consortium is intended to be a self-sustaining research entity that provides a centralized source of truth about inverters,” Brooks said.