The world faces a looming and potentially calamitous “cold crunch”, with demand for air conditioning and refrigeration growing so fast that it threatens to smash pledges and targets for global warming.  From The Guardian UK.

Worldwide power consumption for air conditioning alone is forecast to surge 33-fold by 2100 as developing world incomes rise and urbanisation advances. Already, the US uses as much electricity to keep buildings cool as the whole of Africa uses on everything; China and India are fast catching up. By mid-century people will use more energy for cooling than heating.

And since cold is still overwhelmingly produced by burning fossil fuels, emission targets agreed at next month’s international climate summit in Paris risk being blown away as governments and scientists struggle with a cruel climate-change irony: cooling makes the planet hotter.

“Most people tend to think of energy in terms of heat and light and transport,” said Toby Peters, visiting professor of power and the cold economy at the University of Birmingham. “But more and more, it’s going to be about cold. Demand for cold is already huge, it’s growing fast, and we’re meeting it in basically the same way we’ve been doing for a century. Cold is the Cinderella of the energy debate. If we don’t change the way we do it, the consequences are going to be dramatic.”

Artificial cold is a recent phenomenon: the first domestic air-conditioning unit appeared in 1914, the first home fridges in 1930. As late as 1965, only a third of UK homes had one.

But cold has quietly become a part of 21st-century life, certainly in advanced economies: people expect air conditioning to make homes, offices and cars comfortable (and many cities habitable); most food in the developed world is chilled or frozen; medicines, including vaccines, need refrigeration; industries such as steel, chemicals and plastics depend on cooling; deprived of cold, data centres – and the internet – would collapse in minutes.

“Heat we know, and we talk about it no end,” said Nick Winser, a former head of Britain’s National Grid who chairs the Energy Systems Catapult, a new UK technology and innovation centre in the energy field. “Cold has become a hugely significant – yet almost unsung – part of our energy footprint. We know the energy landscape is going to be very different in the near future. We need to see cold’s place in it; start thinking of heat and cold as parts of one integrated system.”

Demand for cold is rising exponentially. Driven by a warming planet and a rapidly expanding middle class in the developing economies – and warmer climes – of south and south-east Asia, air conditioning in particular is surging.

But there is a problem. Almost all cold is still produced by what is known asvapour-compression refrigeration, 100-year-old technology that uses refrigerants – fluids, now usually hydrofluorocarbons or HFCs, that absorb and release heat – plus large amounts of electricity.

“It’s a mature industry,” said Graeme Maidment, professor of refrigeration and air conditioning at London South Bank University. “And for years it wasn’t an obvious industry: it hummed along in the background, like an air conditioner, in fact. That’s only changed in the past 15 years or so, because it’s grown so fast and because we’re so much more concerned by energy consumption, carbon emissions, climate change.” 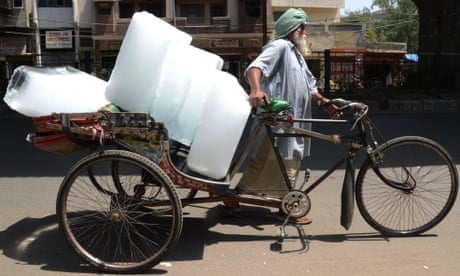 Air conditioning already accounts for about 40% of power use in Mumbai, India. More than half of Saudi Arabia’s peak summer power consumption – generated by burning 1bn barrels of oil a year – also goes on air conditioning. Even in Britain, air conditioning and refrigeration account for almost 20% of total electricity use, Maidment said.

Most projections suggest that figure will rise sharply. Over the next 15 years,according to the EU, the energy used to cool buildings across Europe is likely to increase by 72%, while the energy used for heating them will fall by 30%.

About 87% of US buildings are now air conditioned, and trends in the developing world suggest it is advancing fast down the same route. The Intergovernmental Panel on Climate Change estimates that demand for residential air conditioning alone will rise from 300 terawatt hours a year in 2000 to 4,000 in 2050 and 10,000 by 2100.

New sources of demand are expanding fast, too: according to Computer Weekly, global data centre power consumption quadrupled from 2007 to 2013, and is set to nearly double again over the next 15 years.

Research by the Netherlands Environmental Assessment Agency predicts that by about 2060, the amount of energy used worldwide in cooling will overtake that used in heating.

“In the west,” said Richard Williams of Heriot-Watt University, “we’ve traditionally been more concerned with efficiently capturing and reusing heat. The source for cold has mostly been conventional electricity, or diesel. We’ve just been very slow to realise how important cold has become to our lifestyles.”

But air conditioning and refrigeration are doubly polluting: not only are they produced from climate-warming fossil fuels, but the HFCs and other refrigerants cooling systems use produce greenhouse gases that can be up to 4,000 times more potent than carbon dioxide.

If fossil fuel-generated energy still accounts for about 75% of all cooling emissions, these refrigerant leaks could cumulatively increase the warming effect of manmade CO2 emissions by up to 25% by the middle of the century, according to the National Institute for Public Health and the Environment in the Netherlands. Altogether, Maidment said, refrigerant leaks and energy use in cooling account for “around 10% of global CO2 emissions. Already.”

Some refrigeration units are far more harmful. According to a report by the energy consultancy E4tech, the small diesel-powered fridges on food trailers emit nearly 30 times more harmful particulate matter and six times more nitrogen oxides than the engine that powers the trucks.

That matters, because the world needs an awful lot more refrigerated food trailers. With the world’s population forecast to reach 9 billion by 2050, cold’s role in food security will be key. According to the UN Food and Agriculture Organisation, global food demand is set to grow by 50% in that time.

But the FAO also reckons as much as a third of all food is lost or wasted between harvest and home, mostly in the developing world. Halving food waste would feed 800 million of the 1 billion chronically undernourished people in the world, research by the International Institute of Refrigeration suggests.

“What’s remarkable,” said Peters, “is that 95% of agricultural research is about increasing yields.” Reducing waste should be a priority, he said, and “cold really is the key. But cold done smartly. If we just replicate the old technologies, we’re heading for environmental disaster.”

What is cold done properly? For Maidment, who laments the fact that less than 0.2% of UK engineering research is devoted to cold technologies, it is about “reducing the need for cooling by – for example – designing buildings better. It’s increasing the efficiency of the cooling process. And then making sure the energy you do use is as clean as possible.”

Winser sees “real opportunities for British businesses in all this”. Peters, who co-authored a report on the cold economy to be published by the Birmingham University policy commission on 28 October, said we must “completely rethink cold. We need cooling, and we need it globally. Is sucking electricity off the grid really the best way to provide it?”

What if, he suggested, you could use cheap, off-peak renewable energy – wind, say – to make ice at night, and use that for cooling during the day? What about district cooling systems? “Storage,” he said, “will be critical: we store heat, why aren’t we storing cold? And new materials, to move cold around.”

Cold is also wasted. Peters pointed to liquefied natural gas, or LNG. “That’s gas cooled to about –160C to be transported, then ‘unpacked’,” Peters said. “At present, all that cold gets dumped in the sea. And meanwhile, just up the road, someone’s burning diesel to create cold.”

Waste LNG cold could also be used to power clean cold technologies: Dearman, a small UK engineering company with which Peters is involved, is road-testing azero-emission, cold-producing engine that runs on liquid nitrogen and could replace the diesel refrigeration unit in a food trailer.

“We just need to think about cold differently,” said Peters. “Because solving cold, really doing it smarter, would actually do more to help the world meet its climate-change targets than almost anything else I can think of.”