Carlos Alvarado Quesada, the president-elect of Costa Rica, plans to continue the country’s extraordinary stewardship of the environment with a pledge to decarbonize its transportation sector.

On Sunday, he promised that one day Costa Rica will “celebrate its emancipation from petrol and diesel in the transportation system, replacing them with clean energy,” Climate Change News quoted him saying.

“That transformation would be the ‘abolition of the army’ of our generation,” said Alvarado Quesada, 38, comparing the task to the country’s disbanding of military forces in 1948, a point of national pride.

In recent years, Costa Rica has become a global green leader for deriving most of its electricity without using fossil fuels. Last year, the nation of 4.8 million people ran for 300 consecutive days on its renewable energy mix of hydropower, wind and geothermal. That impressive feat bested its 2015 record of 299 days of 100 percent renewable production. It also went 271 days using only renewable energy production in 2016.

Despite a 98 percent renewable power grid, its “Achilles heel” is its gasoline-dependent transportation sector. About half of its climate-changing emissions come from transport.

But the Costa Rican government has been working hard to green its fleet. Earlier this year, President Luis Guillermo Solís signed a law that eliminates sales, customs and circulation taxes for electric vehicles and allows them to use municipal parking facilities free of charge.

“This law will make it possible to transform Costa Rica’s vehicle fleet in just a few years, from cars, cargo vehicles, trains and buses, replacing them with 100 percent electric vehicles,” the outgoing president said then.

Alvarado Quesada from the ruling Citizen Action Party won more than 60 percent of the vote and will take office on May 8. According to Climate Change News, he campaigned on modernizing and electrifying an old diesel train, promoting research and development in hydrogen and biofuels by transforming the state-owned oil refinery, and banning oil and gas exploration in the country.

If you ever feel like the world’s plastic nightmare might never end, a new study shows proof that plastic pollution legislation actually works.

There are significantly fewer plastic bags on the seafloor ever since a number of European countries introduced fees on the items, according to a 25-year study from the UK government’s Centre for Environment, Fisheries and Aquaculture Science (CEFAS).

The world has a parking problem. Case in point: Apple’s new headquarters, which provides more space for parking than for working. Apple isn’t alone though. Across the world, cities allocate thousands of square miles to storing cars, often as the result of mandated minimum parking codes.

The problem? Many of those parking garages sit half-empty, making cars parks wastes of space in cities where space is at a premium. One solution? Repurposing the garages into usable space for communities. A new project from Carl Turner Architects and Makeshift has transformed seven levels of a London parking garage into a building that houses local makers, studios, street-food kiosks, a hair salon, and co-working space.

To build Level 5, the architects had to install toilets and walls. The floors remain slanted with yellow arrows painted onto them in some cases. The building still has the DNA of a parking garage, but it’s been totally revamped for public use—with no cars in sight.

This isn’t the first project to tackle the idea of transforming underutilized parking infrastructure. Some new building designs even come with flexible parking spaces intended to be converted to other uses when needed. If you can’t reduce parking altogether, you might as well reuse it to brilliant effect.

Air pollution, transport-related emissions, and various air-cleaning efforts all tend to focus on single-occupancy vehicles because of their environmental impact. Fewer cars on the road also leads to significant time (and money) savings. Transport-data company, INRIX, recently looked at GPS data from 300 million cars and devices in 1,360 cities, to take a deeper look at the impact of congestion. They found that in Los Angeles, drivers spend an average of 102 hours stuck in traffic every year, making it the most car-congested city in the world. Sao Paulo was in 4th with 86 hours lost to traffic, and with 74 hours, London took 7th place. By incorporating the direct costs of congestion (e.g. time and fuel) along with the indirect ones (e.g. increased shipping prices), INRIX could also put a monetary value on traffic jams. By their measure, congestion cost the UK more than US, $53.4 billion in 2017, while the figure for the US was a staggering $305 billion.

But new research from Dr Caroline Shaw, and her colleagues at the University of Otago, suggests that the health benefits of getting out of the car could outweigh all the others. A public health specialist with both a medical degree and a PhD, Caroline has been working at the interface of transport, health and climate change for several years. This latest paper ($), published in the New Zealand Medical Journal, shows that changing the balance of transport in five of the country’s six major cities could save lives, improve health and reduce carbon emissions.

The six cities in the study were Auckland, Wellington, Tauranga, Hamilton, Christchurch and Dunedin. Each city has its own particular transport balance – for example, 55% of Auckland households have two or more vehicles, with just 0.5% of trips taken by bike, whereas Christchurch residents take to the saddle six times more often. With the highest rate of active transport (i.e. walking or cycling) and public transport in NZ, the capital, Wellington was taken as the study baseline. As of 2013, 27.5% of all trips in the city were undertaken on foot, 6.2% on public transport, and 1.3% by bike. But Caroline was quick to point out that Wellington could do much more, ‘We used Wellington as an example, not because the city is doing everything perfectly, but because its transport balance is demonstrably achievable in New Zealand.’

They took data from previous national studies on health, travel, and air quality to build their database, as well as comparable data from other countries to fill identifiable gaps. This data was together used to populate a specially-adapted version of the Integrated Transport and Health Impacts Model (ITHIM), a mathematical tool developed by public health researchers at Cambridge University in 2009. The ITHIM offers a way to assess the health implications of transport policies in different cities by looking at a population’s physical activity, road traffic injury risk, and exposure to fine particulate matter (PM2.5). 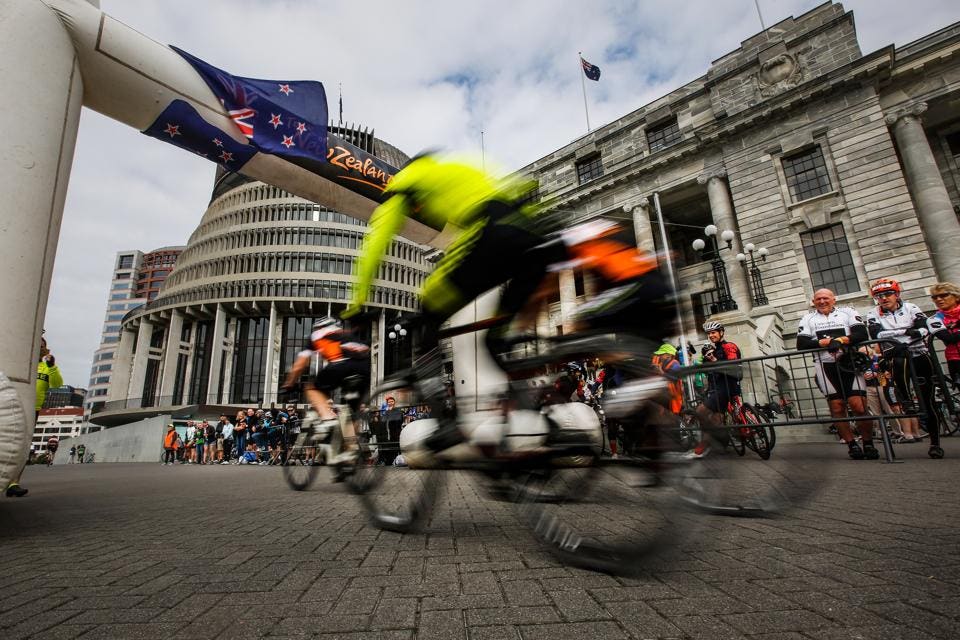 The data and model combine to provide four internationally-recognized metrics for population health – total number of deaths, years of life lost (YLL, a measure of premature deaths), years of life lived with disability (YLD) and disability-adjusted life years (DALY, the number of years lost due to ill-health). In every city, a move away from single-occupancy vehicles was shown to reduce all of these metrics – in other words, getting people out of their cars resulted in significant health benefits for everyone.

‘Let’s look at Hamilton, a city with low levels of active and public transport use,’ said Caroline. ‘If it had a transport balance that looked like Wellington’s, we estimate that it would have ~52 fewer deaths per year and would avoid 1,000 DALYs. That’s a significant change.’ Despite New Zealand’s sporting prowess, fewer than half of adults meet national physical activity guidelines, so the biggest health benefit to moving towards more active urban transport would be an increase in physical activity. With more people taking to their bikes or to their feet, populations would experience an overall reduction in diabetes and BMI.

The authors also surmise that ‘This shift away from the car results in an overall reduction in road traffic deaths, as public transport in particular is far safer than driving.’ Reduced driving would also reduce the risk to cyclists and pedestrians. Alongside this, cities would experience a drop to carbon emissions – and in some cases, the shift would be significant. The study estimates that if Auckland, NZ’s largest city, had a better mix of transport modes, it could save 430,000 tones of CO2 per year, equating to a reduction of about 20%.

Yes, there are gaps in the data, and yes, some simplifications had to be made to the model. But rather than that leading to artificially high estimates, it seems likely that most factors in this study were actually underestimated – so, the health (and environmental) benefits could be even larger than these results suggest. I asked Caroline what she’d like to see happen to NZ’s urban transport landscape. Her response,

‘We’ve transformed our way of thinking about housing in this country – policymakers now accept that it’s about more than four walls; good housing fosters a healthier population. We need a similar transport rethink if we’re going to achieve our carbon goals, and create cities that we actually want to live in.’

As I see it, by choosing not to compare NZ cities to the likes of Copenhagen or Vancouver in this impressive study, Caroline and her colleagues have also made it much harder for policymakers to question the relevance of their findings. Now, let’s hope those in government actually do something about it.

*Yes, I have a car – the first one I’ve ever owned. Unfortunately, even in Wellington, it can still be difficult to ‘join the dots’ in your journey. Large parts of the region are out-of-bounds without a car. We use ours, on average, once a week.