Often, solar installations compete with agriculture for arable land, which has led many researchers and energy developers to seek ways to combine the two so land can remain in productive use while also providing solar energy. Germany’s Frauhofer ISE has been a leader in this area and determined that combining solar and agriculture can increase the productivity of arable land by up to 60%.

Enel Green Power is a subsidiary of Enel, the Italian utility company. Established in 2008, it is headquartered in Rome but operates in 27 countries located on 5 continents, providing electricity generated by solar, wind, geothermal, and biomass sources to its customers. The company operates three solar power plants in the United States — one in Stillwater, Nevada; another in Sheldon Springs, Vermont; and Aurora Solar in Minnesota.

In an e-mail to CleanTechnica, Marcus Krembs, head of sustainability for Enel North America, says, “Solar power development is on track to occupy nearly 2 million acres in the United States by 2030. With land utilization remaining a key consideration for developers, the solar power industry must continue to push for innovation and land stewardship practices that ensures a mutually beneficial relationship between solar farms and the land on which they are built.

“Enel Green Power is championing this movement through the adoption of dual-use solar practices — the utilization of land for both agricultural or ecological benefits and solar power. To achieve our goal of driving the energy transition with truly sustainable, clean energy, we are integrating many practices such as establishing large-scale habitats for pollinator insect species to boost crop yields and hosting sheep grazing to reduce maintenance costs and increase solar competitiveness, benefiting both local ecosystems and farmers. Enel Green Power views innovation and the driver of sustainability, and dual-use solar practices reinforces our company commitment to empower sustainable progress.”

The Aurora solar power plant in Minnesota consists of 16 different sites which combined produce 150 MWdc of electricity. On an annual basis, they generate 210 million kWh of electricity — enough to meet the energy needs of 17,000 average US households while keeping 150,000 tons of carbon dioxide emissions out of the atmosphere.

At the Aurora facility, Enel has partnered with Bare Honey, which uses solar power exclusively in its operations, to raise awareness about the decline in the honeybee population. It has planted native pollinator vegetation throughout the Aurora facility that provides a natural habitat for bees and butterflies underneath operating solar panels.

In addition, Enel Green Power has developed a conservation grazing plan in cooperation with Minnesota Native Landscapes. Each solar installation comes with its own landscape conditions and ecological goals in terms of regenerative land management. The conservation grazing plan offers an integrated and holistic approach that is in line with these goals and involves determining the appropriate species and class of livestock needed to execute it.

At the Aurora solar farm, sheep are used in place of traditional lawnmowers. Not only does the company not have to worry about complications with heavy machinery damaging the land or solar equipment, the sheep enhance vegetation by acting as pollinators, carrying and spreading seeds from plants around the landscape as move and graze under the solar panels.

Taking a further step forward in the agrophotovoltaics, Enel Green Power plans to leverage the lessons learned from its environmentally friendly sites to transform a portion of its newest solar installation in Texas to pilot an agricultural farm. On a  five acre portion of the site leased from a Texas based organic farmer, the company plans to install a small solar facility in a way that accommodates crop and produce growth typical of the region.

There has been opposition to solar installations from some farmers, particularly in Iowa where agriculture is one of the state’s largest industries. Efforts from companies like Enel Green Power show how solar and farming can co-exist and support each other while helping to bring more renewable energy to America. 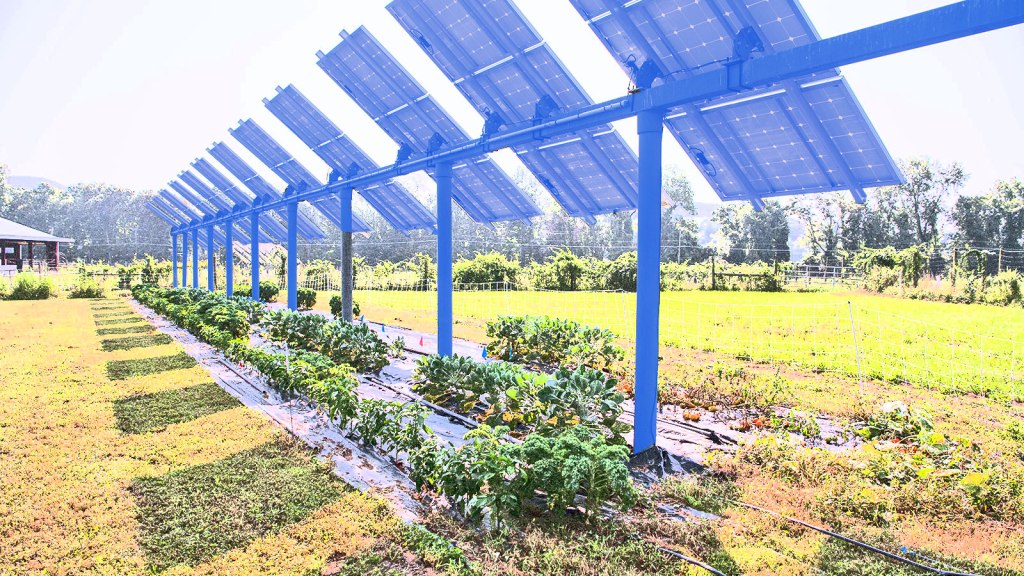 The Kominek family farm is a green expanse of hay and alfalfa in northern Colorado. The family has planted and raked crops for half a century, but as yields declined over recent years, the farm began losing money. In late 2017, Byron Kominek went looking for more profitable alternatives, including installing solar panels and selling electricity to the utility. But Boulder County’s land-use codes made it difficult to use their 24 acres for anything but farming.

So the Komineks found a compromise: a solar array with plants growing beneath, between, and around rows of photovoltaic panels.

Construction is slated to begin this spring on a 1.2-megawatt solar array on the Kominek farm. Some 3,300 solar panels will rest on 6-foot and 8-foot-high stilts, providing shade for crops like tomatoes, peppers, kale, and beans on a five-acre plot. Pasture grasses and beehive boxes are planned for the perimeter.

“Now there will be potentially more food grown in the community, more renewable energy, and more revenue to local farms,” said Kominek, 37, whose late grandfather Jack bought the farm in 1972.

If successful, the project could serve as a model for other cash-strapped farmers, by transforming underperforming fields into potentially money-making hubs of clean energy and fresh food.

Xcel Energy, the state’s biggest utility, has agreed to pay for each kilowatt-hour delivered from the Kominek’s solar array to the grid. Their neighbors can buy into the project, too. Participants invest in a percentage of the array, then receive credits on their monthly utility bills. Their investment also helps defray some of the farmers’ upfront construction costs.

The vegetables will be sold through a community farm-share program, which allows neighbors to invest in the project in exchange for boxes of produce.

This marriage of agriculture and solar photovoltaics — known by the awkward name “agrivoltaics” — is an emerging niche within the broader solar power industry.

In the United States, less than 5 megawatts’ worth of solar arrays have crops planted beneath them, according to the National Renewable Energy Laboratory, or NREL. That’s barely a speck of the country’s 71,300 megawatts of installed solar capacity. The farm-plus-solar sector is relatively bigger in Japan, where the concept first emerged over a decade ago. Hundreds of projects now exist, including a 35-megawatt solar array that hovers over fields of ginseng, herbs, and coriander.

Proponents say that this approach could allow for widespread renewable energy development without displacing much-needed land for food. Recent studies suggest that it could lead to more efficient energy and crop production by creating a cooler, moister microclimate.

In a recent test in Arizona, scientists compared crops planted under solar panels with those grown in direct sunlight. They found that total fruit production for red chiltepin peppers was three times higher on the plots under the panels, and cherry tomatoes doubled production. Some of these plants used significantly less irrigation water, in part because the shaded soil retained more moisture. Solar panels placed with plants were also substantially cooler during the day — and therefore operated more efficiently — than the usual ground-mounted arrays, according to the study last year by NREL and the Universities of Arizona and Maryland.

A project in South Deerfield, Massachusetts, also delivered promising results. Grass and plants for grazing yielded more than 90 percent as much volume as land directly exposed to sun. Early field tests showed that Swiss chard, broccoli, and similar vegetables produced around 60 percent of the volume of plants grown beneath a full sun.

Kominek’s project, called Jack’s Solar Garden, will provide more opportunities to study agrivoltaics. NREL, in nearby Golden, Colorado, plans to track how plants and panels perform together in Boulder County’s hot, dry climate. “If the structures help keep in moisture, and we have less evaporation, we’ll need less water to grow the same amount or even more [crops],” said Jordan Macknick, the lead energy-water-land analyst for NREL.

Macknick leads NREL’s low-impact solar initiative along with biologist Brenda Beatty. Since 2015, researchers have developed more than 25 sites around the country that combine solar panels with food crops, native vegetation, or pollinator-friendly plants.

Jack’s Solar Garden will be the biggest of the group and the first to include all three types. NREL is also adding solar projects in Puerto Rico, including one on a coffee plantation and another one on pasture lands for cattle.

“We’re really just at the very beginning of understanding the benefits of agrivoltaics and what they could mean not only for the energy sector but also for the agricultural sector,” Macknick said.

Agrivoltaics, also called “solar sharing,” first took off in Japan in 2004, after an engineer, Akira Nagashima, developed a stilted steel structure that raises panels 10-feet high. Available land is scarce in Japan, a country with ambitious targets for developing renewable energy. (Not coincidentally, floating solar arrays — which sit atop irrigation ponds and reservoirs — also got their start in Japan, in 2007.) Recently, Nagashima has begun studying how shade-intolerant crops might fare beneath solar arrays. His research team recently found that corn yields slightly improved in a solar-sharing system.

Beyond research sites, however, pairing corn and other cash crops with solar may present significant challenges. On existing plots, smaller tractors can navigate the narrow spaces between rows of panels. But combine harvesters and other industrial equipment are too wide and bulky to fit through the gaps. Most crops grown beneath panels must be picked by hand. The work is manageable at the scale of a community garden, but it can be grueling, back-breaking work at an industrial scale. Farmers are developing machines to pick strawberries, melons, and tomatoes, which also might bump against the panels.

For farms big and small, a lack of rural infrastructure remains a “key impediment” to boosting adoption of agrivoltaics, said Chad Higgins, an associate professor of biological and ecological engineering at Oregon State University. Power lines and electrical equipment might not be equipped to handle the addition of solar power. Roads and communications networks likewise might need to be expanded to support far-flung operations, he said.

Still, if farmers and engineers can address such hurdles, the potential for agrivoltaics is immense, given how much of the planet’s land is devoted to agriculture. If these “solar-sharing” systems covered even less than 1 percent of the world’s cropland, they could produce enough solar power to meet the world’s annual energy needs, Higgins and other researchers said in an analysis last year. They found that the best places for growing crops are the same areas with strong potential for producing solar power, particularly in the western United States, southern Africa, and parts of the Middle East.

“We have this vision of solar panels out in the desert, in these really open arid areas,” Higgins said. But solar panels are most efficient in climates with plenty of sun and moderate temperatures. Extreme heat can overtax the panels and result in lower electricity production. The same is true for plants.

At Jack’s Solar Garden in Colorado, the solar array construction this spring will kick off a list of related efforts. The Komineks will plant grasses to help prepare the five-acre plot for next year’s vegetable crops, and local members of the National Audubon Society will start planting a large pollinator habitat around the project’s perimeter. The 1.2-megawatt array is expected to begin delivering electricity to Xcel Energy’s grid by early fall.

Byron Kominek said he hopes similar projects will soon follow. In 2018, Boulder County officials updated the local land-use codes to allow for community solar on land otherwise designated for agriculture, and Kominek plans to help train other farmers how to grow crops alongside solar panels. “The hope is that young farmers will have a better understanding of how to do this, and will go out to already built solar arrays, or planned solar arrays, and find a new profession,” he said.

Correction: A previous version of this article mischaracterized the results of the project in South Deerfield, Massachusetts.