At the end of 2013, following a planning process started five years ago, the Colorado Public Utilities Commission (PUC) approved an acquisition portfolio that included 620 megawatts of wind and solar resources. It turned out that renewable energy resources were entering the Public Service Company (PSC) competitive bid process at prices that would reduce costs to consumers. Not only that, but wind and solar bids were also coming in at costs lower than the average costs of the existing generation fleet.

This new economic reality is wrecking havoc on utilities’ investment strategies everywhere, not just in Colorado. But, luckily for Colorado residents, in 2004 voters passed a renewable energy standard (RES) initiative through a popular vote. This initiative specifies that renewable energy should be developed “to the maximum practicable extent” in order to save Colorado consumers and businesses money.

Colorado’s 2004 RES sets a mandate requiring utility compliance. While renewable energy’s cost-competitiveness came as some surprise, the subsequent economic realities are not making everyone happy. The question taking center stage is, “Why not retire old coal powered plants now that cheaper, cleaner energy is economically viable?”

As outlined by Ron Lehr at Greentech Media, Lehr and a team of financial analysts took up this challenging question and have spent two years in search of an indisputable answer.

Lehr, a former Chairman and Commissioner of the Colorado Public Utilities Commission from 1984 to 1991, serves as an expert for America’s Power Plan and the Western Grid Group.

With a team of financial analysts from California and clean energy advocates from Colorado, Lehr affirms that the time is right to retire coal in Colorado. Lots of coal. 6,000 Gigawatt-hours of dirty, polluting, climate-changing coal, to be exact.

Why are Utilities Reluctant to Retire Coal?

Colorado’s PSC, and it’s holding company, Xcel Energy, has a proposal before the PUC to build and own a new 600-megawatt wind farm. With a broad RES compliance program, Xcel is the state’s largest utility and leads the nation in renewable energy integration.

It should be a no-brainer to retire the state’s older coal plants, but there are significant reasons why utilities all across the country are reluctant.

The main problem is that utilities continue profiting from old plants for as long as they can hold onto them. This is because utilities are incentivized to invest capital into their power plants (and transmission and distribution, as well) through long-term depreciation schemes.

Regulators allow utilities to earn up to a set, authorized rate of return on the equity portion of capital invested. Depreciation should, theoretically, reduce the account balance over a set term, and a zero balance should flag the plant for retirement. But, by continually reinvesting equity back into the old coal plant’s operations via expenditures for new repairs, new pollution control equipment, etc., depreciation schedules are continually revised and extended.

This means that, as long as the plant is in service, utilities are earning the maximum return on their equity investments for every penny that is not yet depreciated. The rate that customers pay for their electricity is then allowed to rise, in order to cover the costs of generation as well as new expenditures, and any leftover revenue is just that much more food for the golden goose.

No one gives a flying pig about what dirty, polluting, climate-changing coal plant emissions are doing to our lungs, our planet, or our children’s future. Utilities are incentivized to care more about spending money on the golden goose.

Retiring an old coal plant “early,” meaning before it is depreciated down to zero, would result in lost returns, as well as “stranded” equity. Without a financial rescue plan compensating a utility for the loss of its golden goose, any change in “business as usual” is doomed to inevitable, foot-dragging failure.

How to Financially Incentivize Retirement?

From “Why not retire old coal powered plants now that cheaper, cleaner energy is economically viable?,” the real question became more focused: “How can fossil plants that raise the cost of service to consumers be shut down or retired in favor of new wind and solar to support, rather than oppose, the utility’s financial interests?”

Under the 2010 Colorado “Clean Air Clean Jobs” Act, a round of early coal plant retirements found a workaround for the stranded assets situation. The un-depreciated amounts were simply left on the books (and in customers’ rates) as though the retired plants were still in service. With customers effectively subsidizing the retirement, utilities were allowed both the return of their equity and their return on it, too.

One alternative Lehr and his team suggest is refinancing the depreciation amount with lower-cost debt by paying the utility with proceeds of a bond issuance. This would more effectively remove the asset from the books and (more fairly) save consumers money. Additionally, new, more productive investments could be immediately considered.

Another alternative suggested is allowing utilities to own more wind. Without this option, a utility must incorporate renewables by signing power-purchase agreements (PPAs) with wind and solar developers. There is little incentive for a utility to simply buy and sell energy on which they don’t profit.

However, Lehr reports, “our assessment shows new wind investments provide attractive earning potential for the utility, much more effective per dollar invested than old coal plant investments they now carry on their books.”

“Since wind and solar costs are continuing to decline,” notes Lehr, “other utilities and states could eventually encounter the situation described in our financial analysis of the PSC, where new wind can beat operating costs of old fossil generation.” He continues, “As other stakeholders look into financial impacts of crossing the threshold where new renewable energy costs less than old fossil fuels, we hope Colorado’s experience encourages similar analyses in other places.”

Financial modeling revealed that “Seven of 10 remaining PSC coal plants have variable operating and maintenance (O&M) and fuel costs higher than new wind, assumed to be available in Colorado with the Production Tax Credit (PTC) at $25 per megawatt-hour (MWh).” Lehr explains, “While the actual costs of new wind and solar being added to the PSC system right now are confidential, we believe the PSC can build new wind at these prices.”

Public documents filed by one of the PSC’s sister companies at New Mexico’s Public Regulation Commission listed wind costs for three projects at $19, $20, and $21 per megawatt-hour. Lehr and his team of analysts also found costs in the same range from Lawrence Berkeley National Laboratory analyses on wind costs around the country, “including costs for wind in the ‘interior’ section of the country.”

Lehr offers additional important points to consider. “Wind in Colorado has to provide its own transmission to connect with utilities,” he explains, “so these wind costs include lines necessary to deliver power. Also, no carbon or other emissions values were included in the financial analysis, so if these real costs were added to the evaluation, additional old coal plants would cost even more to run than new wind.” 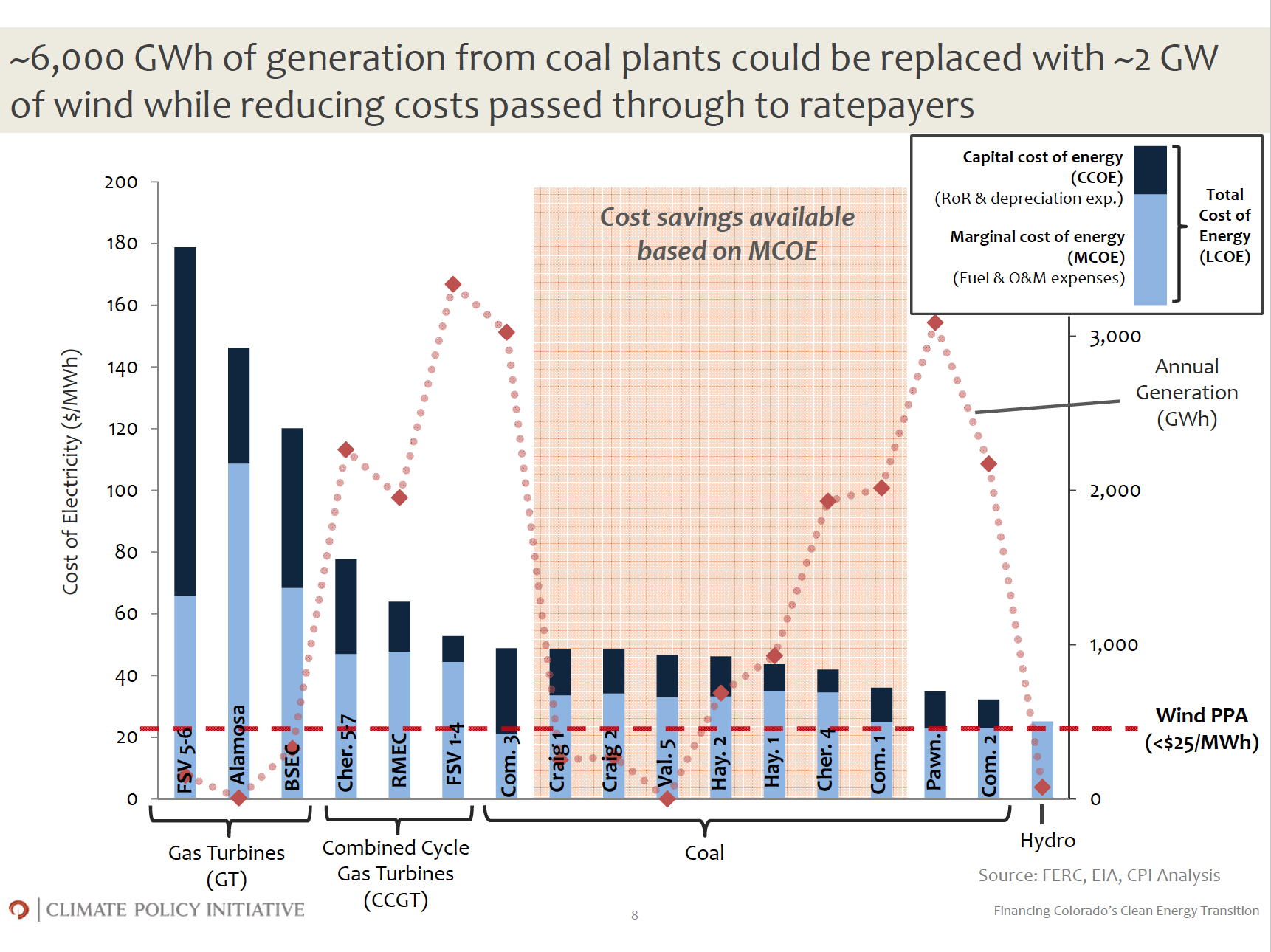 “The PSC’s generating plants are represented in the chart below by bars; fuel and variable O&M costs are shown in blue, and capital costs are in black. Wind costs are shown by the horizontal dashed red line. Plant operating output in 2014 is represented by the dotted red line. The pink box highlights the seven coal plants we found whose ‘marginal cost of energy (MCOE)’ or operating costs in 2014 exceed the cost of new wind. All values for this financial analysis are taken from publicly available sources, such as the Department of Energy, Energy Information Administration, company SEC filings, and public utility commission dockets.” Credit: greentechmedia.com

Using the industry’s own figures, it shows that burning the oil, gas and coal in the fields and mines that is already either in production or being developed, is likely to take the global temperature rise beyond 2C. And even if all coal mining were to be shut down today, the oil and gas lined up so far would take it past 1.5C. The notion that we can open any new reserves, whether by fracking for gas, drilling for oil or digging for coal, without scuppering the Paris commitments is simply untenable.

This is not an extreme precautionary case. Quite the opposite, in fact: the report uses the hazard assessment adopted by the United Nations. This means a 66% chance of preventing 2C of global warming and a 50% chance of preventing 1.5C – an assumption of risk that in any other field would be regarded as reckless.

Even so, to prevent the odds from becoming any worse, a 2C target means that we can use only around 85% of the fossil fuel that’s currently good to go, while a 1.5C target means we can extract little more than a third (the figures are explained by the US environmentalist Bill McKibben in an article in New Republic). So what’s the point of developing new reserves if the Paris agreement precludes the full extraction of those already in production?

The only means of reconciling governments’ climate change commitments with the opening of new coal mines, oilfields and fracking sites is carbon capture and storage: extracting carbon dioxide from the exhaust gases of power stations and burying it in geological strata. But despite vast efforts to demonstrate the technology, it has not been proved at scale, and appears to be going nowhere. Our energy policies rely on vapourware.

As for the belief among some governments that they can overshoot the climate targets, then at a later date suck carbon dioxide out of the air: this depends on scenarios that would be no less realistic if they involved sorcery. The most popular proposal is to combine the capture and storage phantasm with biofuel plantations covering an area between one and three times the size of India, then harvesting the material they grow, burning it in power stations and burying the emissions. The use of a mere few hundred million hectares of fertile land would have to compete with all the other problems the biofuel wand is meant to magic away, such as the use of petroleum in cars and kerosene in planes, as well as the minor issue of feeding the world’s people.

All this nonsense is a substitute for a simple proposition: stop digging. There is only one form of carbon capture and storage that is scientifically proven, and which can be deployed immediately: leaving fossil fuels in the ground.

Not developing fossil fuel reserves is much easier than breaking them open then having to close them later. As the Oil Change report points out, shutting working mines and wellheads means confronting and compensating companies that have invested heavily in production, and retraining and re-employing the people who would lose work. Some of this will have to happen anyway, if governments are to honour their promise in Paris. But their effort should be to minimise pain, not to extend it.

Their choices are as follows. First: a gradual, managed decline of existing production and its replacement with renewable energy and low-carbon infrastructure, which offer great potential for employment. Second: allowing fossil fuel production to continue at current rates for a while longer, followed by a sudden and severe termination of the sector, with dire consequences for both jobs and economies. Third: continuing to produce fossil fuels as we do today, followed by climate breakdown. Why is this a hard choice to make?

Our governments seem determined to choose option three. Globally, some $14tr is being lined up for new fossil fuel extraction and freight over the next 20 years. Governments are intervening all right: to try to crush political opposition to these projects, while using public money to protect them from market forces.