Farmers in the Midwest are watching the spring planting season shrink due to the climate crisis as damaging storms and flooding are making fields from Oklahoma to Arkansas impossible to sow, a situation that is driving grain prices up in futures markets in a way that could have devastating consequences.

A lower yield of corn and soybeans is already jacking prices for the staple cereals up, which could lead to a ripple effect across the economy. And farmers can lose crop insurance if they don’t hit growing planting deadlines, most of which are in late May and early June, a major source of recovery for struggling farmers in an already volatile economy.

Excessive rain has caused U.S. planting to fall seriously behind schedule. Farmers still had 116 million acres of combined corn and soybeans left to plant as of May 19, far more than they ever had on the date. The previous high was 91 million acres in 1995.

U.S. Corn to be planted, May 19. 2019 marks the highest amount of unplanned acreage in American history.

As Common Dreams has reported, the increasingly dangerous and damaging storms and flooding are likely due to the climate crisis, the sign of what environmental activist Bill McKibben calls “a hot new world.”

There’s a direct connection between climate change and the Midwest deluge, according to Wired. And it’s only going to get worse.

More recent work, published in February by scientists at the University of Notre Dame, shows that floods aren’t just getting more frequent — they’ll also get more powerful in the future. Using a statistical method to blend data from global climate models with local information, the researchers predicted that the severity of extreme hydrologic events, so-called 100-year floods, hitting 20 watersheds in the Midwest and Great Lakes region will increase by as much as 30 percent by the end of the century.

Rain, tornadoes and melting snow have combined over the past two months to make the ground in the Midwest unusable for planting corn and soybeans.

1. Good morning. Time to think about corn and soybean planting progress again. What a past week it has been for precip. Latest 7 day precip map for US below. Yikes. 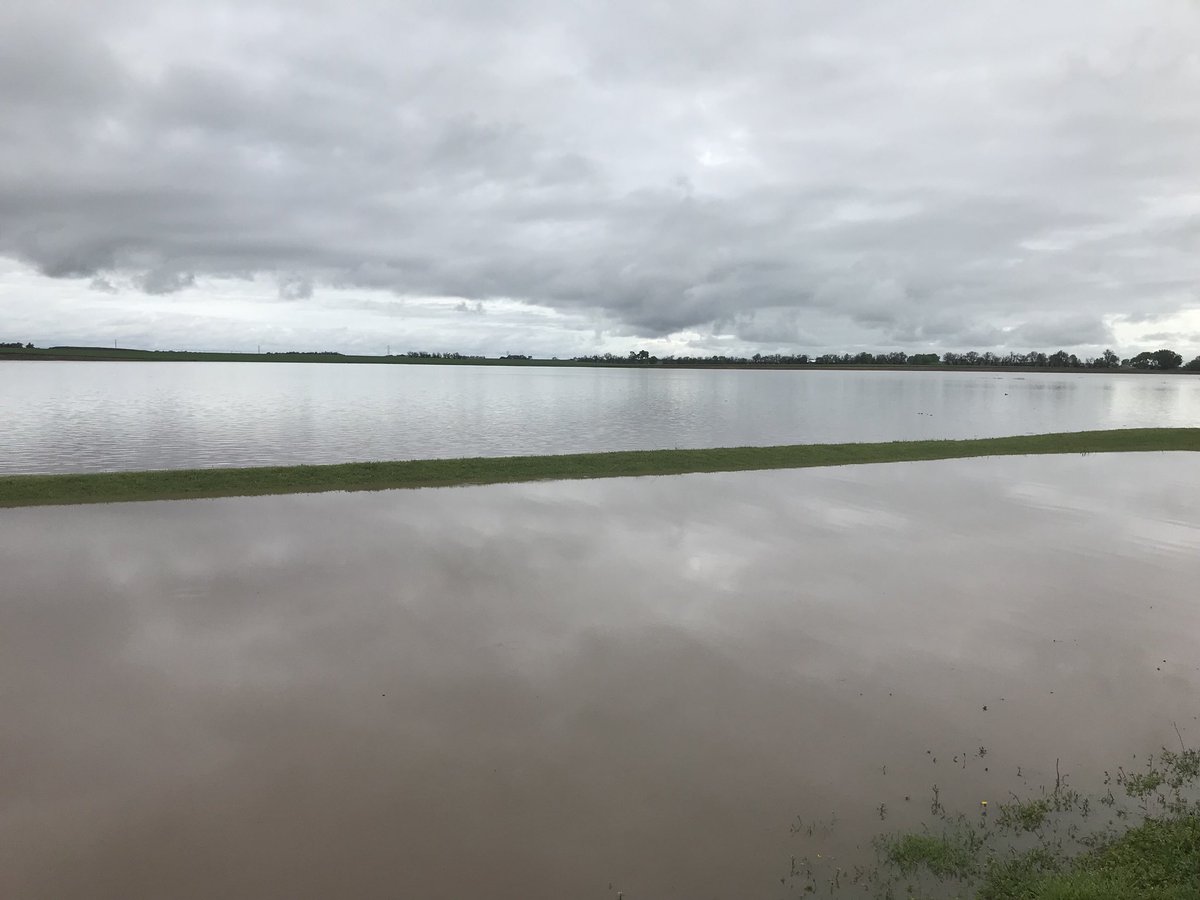 Here’s where the #CropWatch19 #soybeans will be planted in central Kansas, if it ever dries out.

And the weather doesn’t appear anywhere near letting up.

Above-normal rainfall is expected across most of the Midwest and Plains farm belt over the next 15 days, further delaying planting of corn and soybeans and potentially damaging the quality of the developing winter wheat crop, forecasters said.

The delay is becoming a serious issue for the U.S. farming industry.

“Last year at this time, we would have been done,” Illinois farmer Jimmy Ayers told Fox 55/27 Illinois. “So, it’s been a drastic difference from last year to this year.”

And, for planting that is done, the water is making it difficult for planted seeds to grow.

“Any of this land that gets planted now is starving those plants of oxygen,” Ayers said.

In a tweet, western Minnesota farmer Jonathan Mikkelson showed the difference in crop growth from year to year. 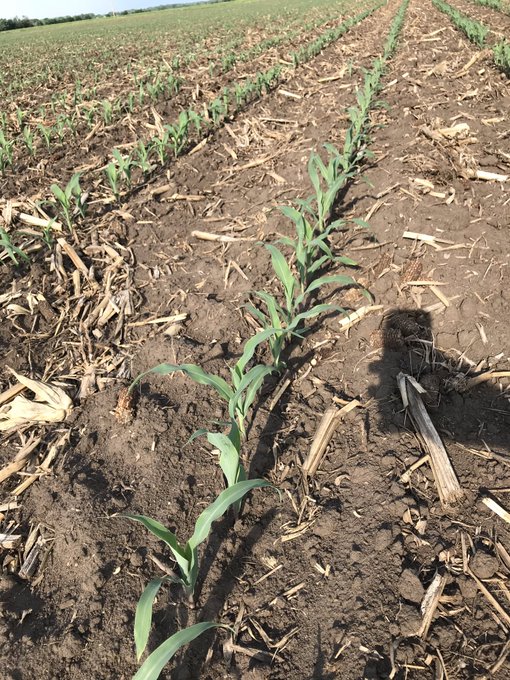 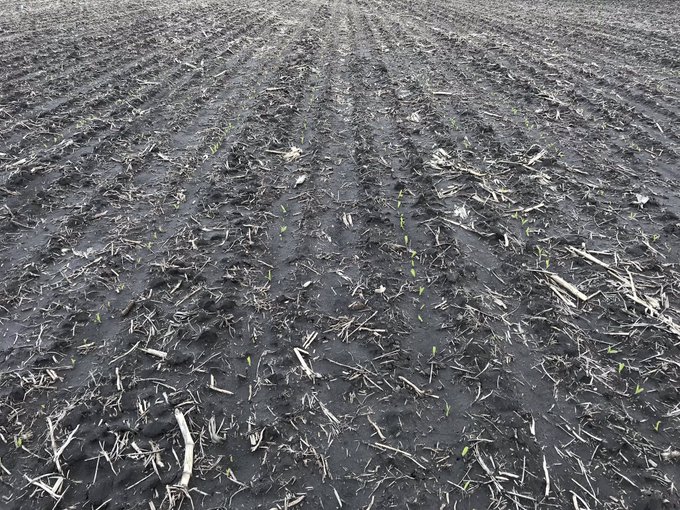 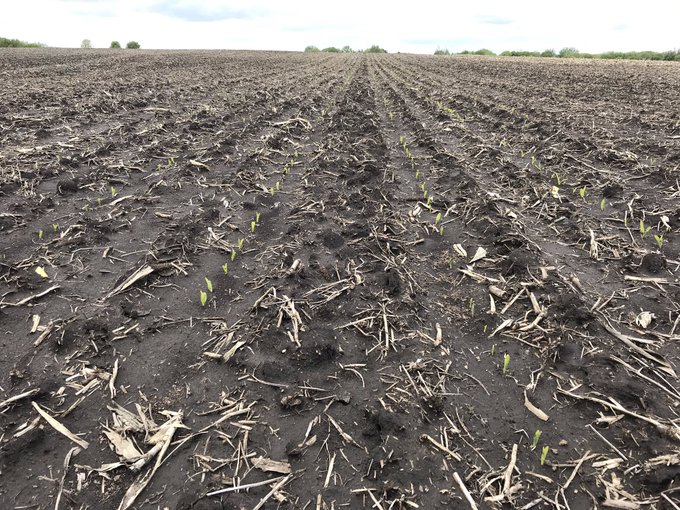 For most Midwestern farmers, planting has been stalled out for most of May. As AccuWeather staff writer John Roach reported on May 26, the yield for 2019 is now projected, at 14.2 billion bushels, to be lower than 2019’s yield of 14.3 billion bushels and far lower than the initial projection of 15 billion bushels.

The window for planting is closing quickly, wrote Roach:

An analysis from futures forecaster firm RMB Group laid out the numbers in more detailed and stark terms. Noting that Iowa is currently the only state with over 50 percent of its crops planted, at 70 percent, the firm pointed to a more dire picture in the rest of the region:

“You’re spending the same per acre,” said Mohr. “You’re just not getting the same dollars for it.” 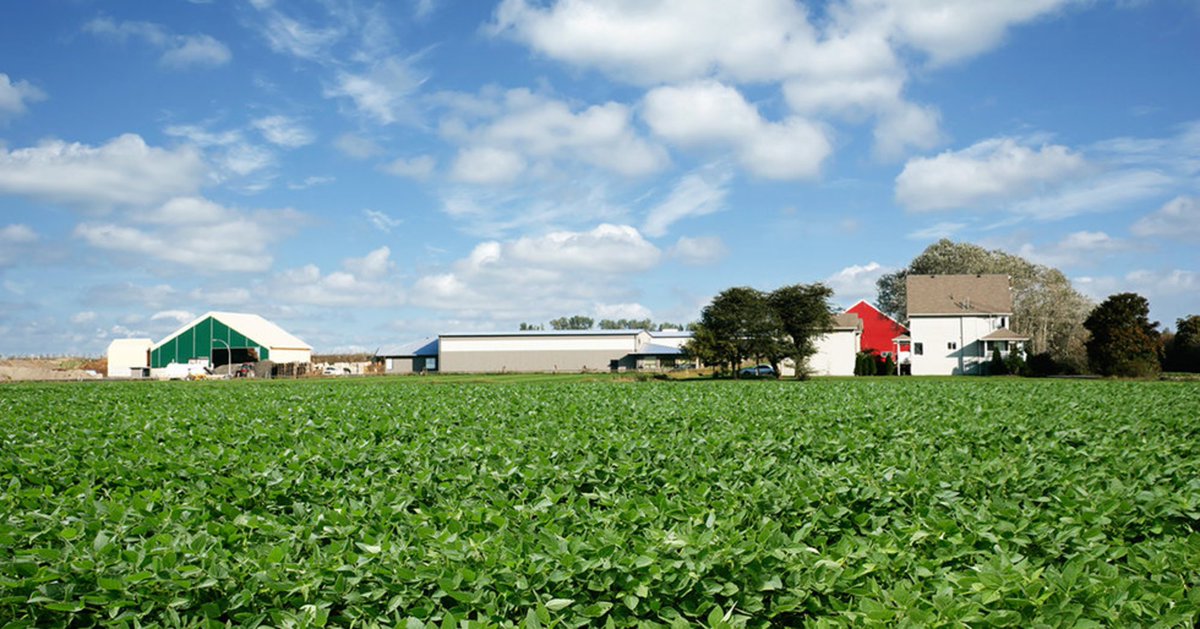 Reposted with permission from our media associate Common Dreams.