By John Greenfield cross-posted from StreetsBlog 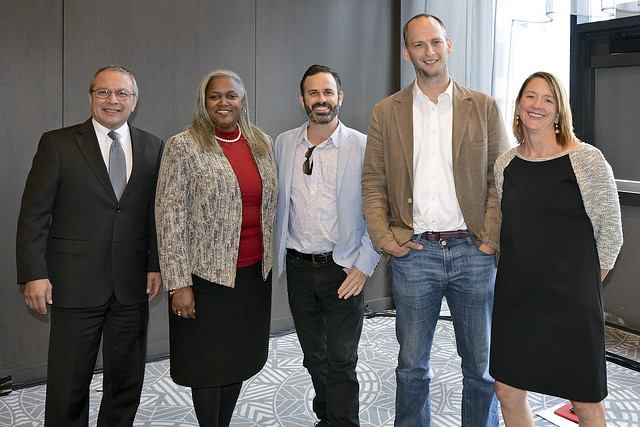 Last week hundreds of civic leaders, entrepreneurs, and academics from across the U.S. convened in our city for the National Shared Mobility Summit, organized by the Chicago-based nonprofit the Shared-Use Mobility Center. This think tank focuses on practices and policies regarding bike-share, ride-share, car-share, and other mobility tools in an effort to maximize the positive impact of these new technologies.

The panel “Connecting the DOTs – City Commissioners on Shared Mobility” featured three former heavy-hitters from the Chicago Department of Transportation. The discussion was moderated by former CDOT commissioner Gabe Klein, now with the consulting firm CityFi and other transportation-related entities (including the board of OpenPlans, Streetsblog’s parent organization).

Joining Klein for the talk were his former CDOT deputies Leah Treat and Scott Kubly, who currently lead the Portland and Seattle DOTs, respectively. Earlier this decade, the three of them launched the Divvy bike-share system, as well as initiatives like the construction of 100 miles of buffered and protected bike lanes, the Bloomingdale Trail, and the Chicago Riverwalk. Rounding out the panel were Richard Mendoza, Atlanta’s transportation commissioner, and Clarena Tolson, deputy managing director for the city of Philadelphia.

“Connecting the DOTs” (get it?) focused on the new challenges and opportunities facing cities as we enter a brave new world of shared mobility, autonomous vehicles, and other emerging technologies. During the discussion, Klein and the city officials also talked about what they’ve learned as they’ve dealt with issues like aging infrastructure, changing regulatory demands, and current trends like ride-share that are disrupting traditional taxi and public transit models.

The officials started out by discussing some of the new shared-mobility and transit initiatives in their respective cities. Treat discussed Portland’s new BIKETOWN bike-share system, title-sponsored by Nike. Although the locally based sports-gear manufacturer is not known as a bike company, Treat said their sponsorship was probably the largest per-bike investment for bike-share at the time. One feature of the system that Chicago’s Divvy should consider emulating is the option of buying a single bike ride for $2.50, comparable to a transit ticket.

Treat also mentioned the new Portland Aerial Tram, a gondola service that carries commuters between the city’s South Waterfront district and the main Oregon Health & Science University campus, located on top of a hill. The university subsidizes 85 percent of the cost of the line, an investment that proportionate to the percentage of riders who are affiliated with the school.

Tolson discussed Philadelphia’s Indego bike-share service, which has been cited as an example of a system that was planned with equity in mind from Day One. The membership of American bike-share systems, including Divvy, have tended to skew white, male, affluent, and well educated, an issue CDOT began to address last year with the Divvy for Everyone equity program, which offers one-time $5 annual memberships to low-income Chicagoans.

Tolson said Indego was designed to be inclusive from the get-go, with early planning input from community groups and social justice advocates. Individuals who are eligible for public assistance can pay only $5 a month for use of the system instead of the usual $15 rate. Local media outlets have partnered with the city to promote the system to their audiences. As a result, Tolson said, Philadelphians have “embraced this as their own.” Over 900 residents have signed up for discounted memberships so far. 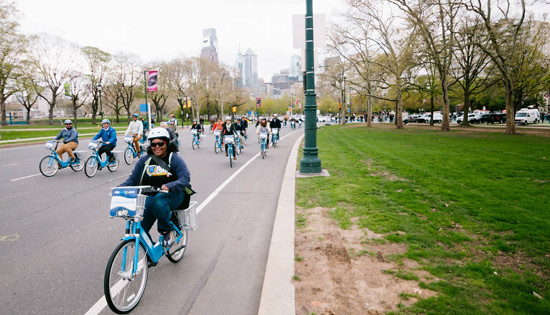 Philly also has a program called Digital Skills and Bicycle Thrills, in which residents who successfully complete a free computer literacy class get a six-month Indego membership at no cost – an idea Chicago would do well to copy.

Kubly said Seattle’s Pronto bike-share system will be relaunching this summer with an all-electric fleet, which will make it easier for users to cope with the Emerald City’s massive hills. They’re currently looking for a sponsor.

Kubly also talked about Seattle’s Vision Zero plan to eliminate traffic deaths. The city already has a lower traffic fatality rate than Chicago. While our city has averaged about 110 traffic deaths per year, Seattle — with about a quarter of Chicago’s population — averages only about 20 fatalities per year. Drunk driving is a factor in about half of Seattle traffic deaths, so combatting this problem will be key for reaching the city’s goal, Kubly said.

Recently Seattle has partnered with Uber and Lyft to provide free rides from nightlife areas on weekends and holidays, according to Kubly. He said the city is also looking at ways to encourage drivers who’ve had too much to drink to leave their cars for the night, get a ride home, and then catch another ride back to their vehicle the next day, a phenomenon he jokingly referred to as “the park of shame.”

Mendoza said Atlanta will have a referendum on the November ballot that would create a new $0.4 percent sales tax that is projected to raise some $300 million for transportation within five years. Only 13 percent of that money would be earmarked for roads, while the rest would be used for other mobility strategies. These include $66 million for the in-progress BeltLine greenway project, $75 million for complete streets initiatives, and $3 million for expanding the Relay bike-share system, and other sustainable transportation projects.

In a discussion of transportation equity that followed, Kubly who, as a CDOT staffer, was in charge of setting up the Divvy system, noted that in the U.S. bike-share systems have so far been expected to cover all of their own operations costs – something that’s not required of other forms of public transportation. He implied that it’s difficult to create a system that’s economically self-sufficient that also serves dense, wealthier parts of a city as well as less populated, poorer sections of town. “We need to change that conversation,” he said, so that it will be easier for cities to create equitable coverage without having to worry so much about the bottom line.

Klein brought up the sad irony of cities requiring large amounts of off-street parking in new developments, which winds up being paid for by higher rents, while failing to address affordable housing shortages. “We’ve got about 500,000 homeless people in this country,” he said. “We’re subsidizing the storage of machines but we won’t give people homes.”

The conversation then shifted to driverless cars, and the need to enact policy that ensures this new technology will make cities and suburbs safer and less, not more, car-dependent. “In Atlanta we’re acknowledging that autonomous vehicles are coming to all the major cities and we’re getting ready for it,” Mendoza said, adding that public safety will be the top priority.

Kubly noted that the U.S. spent about 80 years planning around cars, and the last decade trying to reduce car dependency. “I fear that with so much intellectual energy being spent on autonomous cars, we’re getting ready for the next ten years of cars,” he said.” He cautioned that, if we allow this new technology to be governed by capitalism, we could wind up with an even less equitable transportation system, where only the poor ride transit, with increasingly anemic service.

Treat sounded a somewhat more optimistic note, arguing that driverless cars are unlikely to fully dominate urban areas because the fact will remain that cars are an inefficient way to transport people in cities. “I think it’s going to hold true that a bike is the fastest, most convenient way to get around urban centers,” she said.