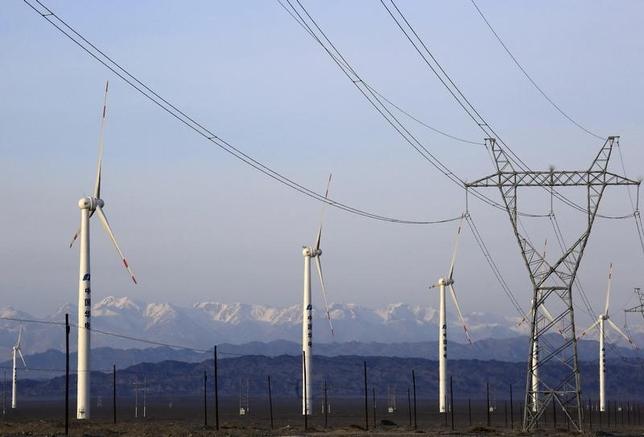 An electricity pylon is seen next to wind turbines at a wind power plant in Hami, Xinjiang Uighur Autonomous Region, China, March 21, 2015.

Energy wastage on wind farms in China worsened in 2015, as plunging utilization rates kept 33.9 billion kilowatt hours (kWh) from being delivered to the grid, the energy regulator said, the equivalent of a fifth of total generated wind power.  Average utilization rates last year fell 165 hours from 2014, the regulator said, calling for tougher measures to cut wastage, as China works to boost grid capacity and convince transmission firms to give priority to renewable energy.

“Restrictions on power caused by waste wind have already become a major problem impacting the healthy development of the wind power sector,” the National Energy Administration said on its website.  Energy from wind can be stored in batteries or by raising the elevation of water that is then run downhill when water is needed, but the related infrastructure is needed to do so.

China’s total wind power capacity reached 133.3 gigawatts by the end of February, making up 9 percent of its total, but generation levels, at 168 billion kWh, accounted for just 3 percent of the national total in 2015.  Critics have accused local governments of focusing on capacity rather than efficiency and utilization, hitting renewable energy targets by building windfarms in regions plagued by low wind speeds and insufficient grid capacity.

The regulator said it would create a power trading mechanism to transmit wind power across provincial and regional boundaries, besides taking action to make sure increases in generation and transmission capacity go hand-in-hand.