February 23rd, 2019 by Carolyn Fortuna Just 24 hours after announcing his presidential bid, Vermont Senator Bernie Sanders raised $6 million from more than 225,000 donors. Part of his allure is his position on clean energy, as Sanders believes that, not only should the US move aggressively toward sustainability, we can achieve it while saving money for the majority of US families. Identifying the fossil fuel industry as one of the “powerful special interests that dominate our economic and political life,” Sanders will push for efficient and renewable energy sources such as solar, wind, geothermal, and biomass.

The US, he insists, has the ability to harness all of these sources domestically.

His campaign is about “transforming our country and creating a government based on the principles of economic, social, racial, and environmental justice.” That includes a transition to 100% renewable energy, significant investments in clean energy technology, and transformations to a green infrastructure through energy efficiency, financial access to renewable energy, and green jobs. “Together, you and I and our 2016 campaign began the political revolution,” he said in an email announcing his decision to seek the presidency again to supporters. “Now, it is time to complete that revolution and implement the vision that we fought for.”

“The only way we will win this election and create a government and economy that work for all is with a grassroots movement — the likes of which has never been seen in American history,” Sanders continued. “They may have the money and power. We have the people.”

In 2016, US presidential candidate Bernie Sanders and a campaign member named Alexandria Ocasio-Cortez initiated political discourse about a sweeping Green New Deal (GND) investment plan over a 10-year period. They said that the GND could create millions of good-paying jobs that would facilitate a just, rapid transition to 100% renewable energy and avert the worst of climate change.

A sit-in at the office of now-Majority Leader Nancy Pelosi (D-California) brought national attention to the Sunrise Movement’s push for a GND, which prods the US to move to 100% renewable energy by 2030. With goals to reduce emissions through massive, rapid deployment of zero-carbon generation, the GND is gaining momentum, with 45 members of Congress, as well as hundreds of supporting groups, including Bill McKibbens’ climate-protection organization, 350.org, signed on.

In December, 2018, at an event with Sanders, Rep. Ocasio-Cortez (D-NY) elaborated on the GND: “This is going to be the New Deal, the Great Society, the moon shot, the civil-rights movement of our generation.”

Low Income Solar Act: This legislation made solar energy more accessible to low-income families who would benefit the most from a reduction in their electricity bills but were are not taking advantage of this affordable, sustainable energy source because of a combined lack of access to financing options. 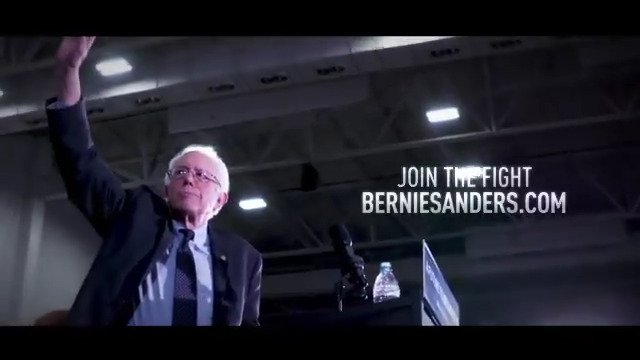 I’m running for president. I am asking you to join me today as part of an unprecedented and historic grassroots campaign that will begin with at least 1 million people from across the country. Say you’re in: https://bsanders.us/tw

A team of “Berniecrats” launched a nonprofit, educational organization in 2017 to revitalize democracy by actively engaging individuals, organizations, and the media in the pursuit of progressive solutions to economic, environmental, racial, and social justice issues. The Sanders Institute is one of the organizations that Bernie Sanders has said will help raise awareness of “enormous crises” facing Americans.

San Juan’s Mayor Carmen Yulín Cruz offered a vision for clean energy self-reliance during a panel discussion, describing the island’s desire for a Green New Deal “to live, to thrive, not only to survive.” Such a policy shift through progressive policy approaches to clean energy, she argued, could ameliorate infrastructure gaps left more than a year after 2 hurricanes decimated Puerto Rico. The current #fakepresident would take federal emergency money from needed areas like Puerto Rico and build a physical wall that has little to do with national security, according to experts.

Instead, the US needs to take a leading role in carbon reduction, renewable energy, improved efficiency of buildings and residences, electric transportation, energy storage, and all of the other technologies necessary to prevent the average temperature of the Earth from rising more than 2° Celsius. It’s not just progressives who are drawn to Sanders’ message of clean US energy. Georgetown, Texas mayor Dale Ross was an unlikely environmentalist amidst a panel of activists, scientists, and legislators in Washington, DC at a December, 2018 climate change town hall hosted by Senator Bernie Sanders. “We’re at a tipping point right now,” said Ross, a Republican. “Coal cannot compete with wind and solar on cost.”

The event was convened to discuss the findings of the Fourth National Climate Assessment and to lay out an inclusive, economically viable climate-change adoption plan. Ross has embraced ecological principles at the municipal level — he’s expanded the city’s park system, begun a system of composting fruits in local schools, and installed 9 charging stations for electric vehicles. Georgetown won a 2018 Bloomberg Mayor’s Challenge grant to create a virtual solar plant by renting out space for panels on the city’s businesses and homes.

David Brooks, columnist for the New York Times and moderate Republican, imploredrecently, “We also need to have faith in each other. Right now, millions of people all over are responding to the crisis we all feel. We in the news media focus on Donald Trump and don’t cover them, but they are the most important social force in America right now. Renewal is building, relationship by relationship, community by community. It will spread and spread as the sparks fly upward.”

If Sanders can bring Republicans like Ross to the proverbial clean energy table, then maybe Brooks’ hope for renewal, relationship, and community can become a political and environmental reality.