The Information reports Waymo’s first commercial ride hailing service featuring driverless cars could begin operations before the end of this year.   NVIDIA is a leader in making computers for self-driving vehicles. According to Reuters, CEO Jensen Huang told an audience in Taipei recently, “It will take no more than 4 years to have fully autonomous cars on the road.

Google was among the first companies to invest heavily in self driving technology. Google reinvented itself a while back and is now called Alphabet and the self driving car program has been renamed Waymo. Google/Alphabet/Waymo has decided not to pursue the dream of manufacturing automobiles, perhaps as a result of watching Elon Musk and Tesla struggle to do so. Instead, Waymo is now concentrating on developing autonomous driving systems it can sell to legacy automakers.

In pursuit of that goal, it is moving some of its operations to Detroit — the spiritual home of the US auto industry — according to The Verge. Waymo established a beachhead in car country when it opened a 53,000 square foot autonomous driving technology center in Novi, Michigan last year. Part of the reason for the new location in Detroit is to test its self driving systems in winter conditions. Another reason may be to let the mainstream players know that Waymo is breathing down their necks. The message may be, “Why spend tons of money building your own self-driving systems when we can do it for you better and cheaper?”

“For human drivers, the mix of winter conditions can affect how well you can see, and the way your vehicle handles the road,” said John Krafcik, CEO of Waymo, in a blog post on Medium. “The same is true for self-driving cars. At Waymo, our ultimate goal is for our fully self-driving cars to operate safely and smoothly in all kinds of environments.” Waymo has already done some winter testing in and around Lake Tahoe. 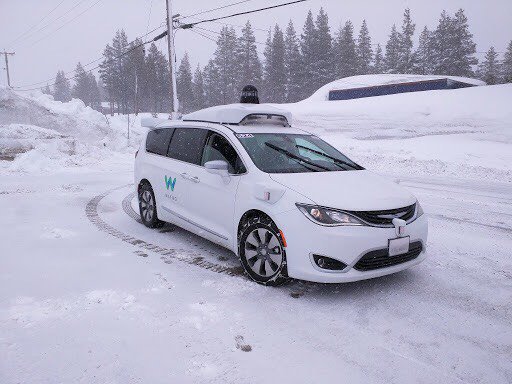 Waymo is already testing self-driving cars in Mountain View, Austin, and Kirkland, Washington. In Phoenix, customers can sign up to use one of the specially equipped Chrysler Pacifica minivans for day trips. The latter city is also playing host to Waymo’s ride-hailing pilot, in which real people can sign up to use the minivans for daily trips. The Information reports Waymo’s first commercial ride hailing service featuring driverless cars could begin operations before the end of this year.

Self driving cars will need an enormous amount of computing power. Processing all the digital information available from digital sensors like radar, lidar, ultrasonic devices, GPS, and cameras requires trillions of calculations per second. NVIDIA is a leader in making computers for self-driving vehicles. According to Reuters, CEO Jensen Huang told an audience in Taipei recently, “It will take no more than 4 years to have fully autonomous cars on the road. How long it takes for the vast majority of cars on the road to become that, it really just depends.”

NVIDIA has worked closely with Tesla on its Autopilot technology and has developed it PX2, a self contained, liquid cooled “supercomputer in a box” the company says has the power that autonomous cars will need to achieve true Level Five self driving capability. It is continuing to develop its technology to make its products more powerful, energy efficient, and cost effective.

NVIDIA is also deeply involved in the field of artificial intelligence. “There are many tasks in companies that can be automated — the productivity of society will go up,” Huang claims. Not everyone is so optimistic, particularly those who predict computers and AI will soon be able to do most of the jobs human beings do today, leaving large swaths of society with no way to earn a living. Is the glass half full or half empty? To quote Jensen Huang, “It really just depends.”

Nissan demonstrated a fully autonomous, next-generation version of its ProPILOT technology on the streets of Tokyo a couple of days ago, giving observers a glimpse of the tech that Nissan says will be utilized in the real world (the commercial sector) from 2020 onwards.

The next-generation ProPILOT system was demonstrated in a modified INFINITI Q50 sports sedan — which was outfitted with 12 sonars, 12 cameras, 9 millimeter-wave radars, 6 laser scanners, and a high-definition map. That hardware was paired with an artificial intelligence system that can “navigate smoothly through challenging city conditions” and provide a “human-like driving feel.”

The demonstrated system can reportedly operate autonomously on urban roads and freeways. All that is required of the “driver” is the selection of a destination through the navigation system. Even situations as complex as the highly busy intersections of urban Tokyo can be handled by the new and continuously improving tech, reportedly.

“Ingenuity is at the heart of everything we do at Nissan,” stated Takao Asami, Nissan’s senior vice president in charge of research and advanced engineering. “Our next-generation ProPILOT prototype showcases technology that will be available for real-world use from 2020. Today’s demonstration is another example of our successful work toward creating an autonomous driving future for all.”

As it stands, Nissan’s commercial ProPILOT technology “only” allows for fully autonomous single-lane travel on divided highways. That tech is currently in the process of being rolled out — with the upcoming, refreshed Nissan LEAF to play host to it, as well as the new Nissan Rogue. Plans are reportedly to roll out the tech across a wide variety of offerings over the next few years.