Austin Energy will now target almost two-thirds renewable energy in its mix, but the progressive city clearly has its sights set even higher.

According to the Austin American-Statesman, hundreds spoke earlier this month in favor of 100% clean energy goal, but a less aspirational target was adopted amid concerns of rising energy prices. However, amendments to the plan direct the utility to examine the possible impacts of using more carbon-free energy.

“We are so fortunate that we are a community that debates stretch goals,” Council Member Leslie Pool told the Austin Monitor. “We challenge ourselves to do more.”

As more renewable energy comes online, Austin Energy has been adding battery storage to help with the integration. Earlier this year, Younicos signed an agreement with Austin Energy for a 1.75 MW, 3.2 MWh energy storage system. The storage system will be part of a Distributed Energy Resource Management System that aims to maintain grid reliability while allowing high levels of distributed solar PV penetration.

Austin Energy has a customer-focused business strategy that has been successful in helping keep rates low, thus far. In 2015, the utility’s residential customers had the second lowest energy bills of any utility in Texas.

The utility is targeting almost 1 GW of solar by 2025, including 750 MW of utility scale renewables as well as distributed generation.

Boulder Municipalization Effort Continues to be fought by Xcel

Boulder’s first application, filed in 2015, proposed transferring assets from Xcel to allow the city to serve customers outside the incorporated lines. Regulators blocked that plan, leading the city to consider alternatives, but as a decision nears, the outcome may be the same.

According to the Daily Camera, following nine days of testimony on the plan earlier this summer, regulators this week opted to give conditional approval for some of the assets Boulder wants to acquire. Others were not approved, and the city’s transition plan was also not approved.

The overall indication is that while regulators will leave a path open for Boulder’s muni bid, it will be expensive and could require going back to voters to authorize more funding for the plan.

Daily Camera: Regulators set ‘path forward’ for Boulder, but will deny much of electric utility plan 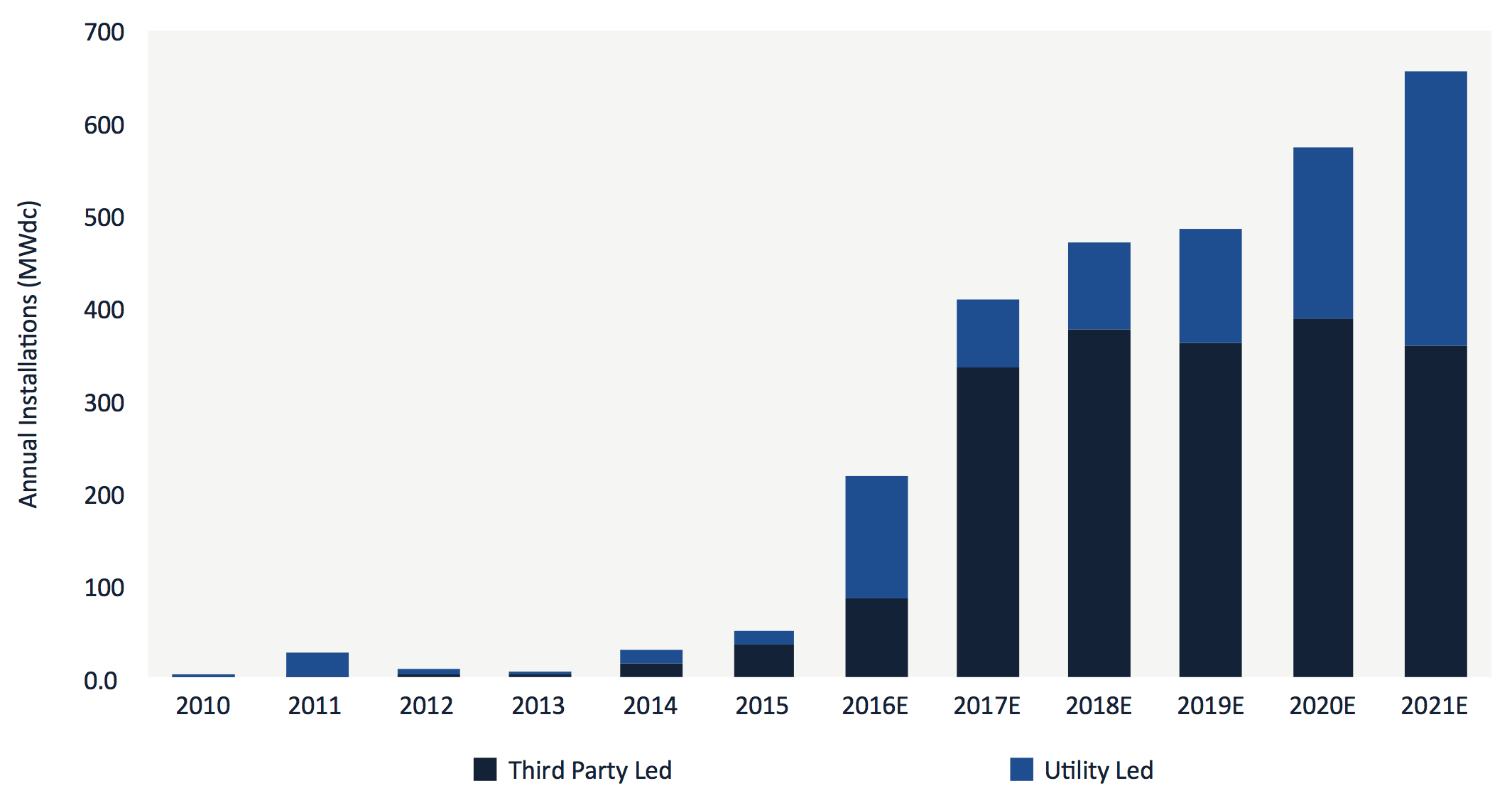 These projects are attractive because they diversify utilities’ energy portfolios, help rein in electric bills, and provide an economic boost to the communities where they are sited (and the ones they serve).

As more community solar is brought to market, however, important questions loom about access and the distribution of benefits.

Finding answers requires an intentional approach from regulators, developers, and utilities alike to ensure that low-income households, and others traditionally shut out of owning renewable generation, have a chance to opt in.

This month, ILSR submitted the following comments to the Minnesota Public Utilities Commission to inform its discussion of universal access to community solar. They are included below, lightly edited for clarity.

We support a definition of a low-income subscriber as a household earning less than 80% of the area median income, or one that already participates in an existing means-based program, such as the Energy Assistance Program.

The following represent the key principles in designing a community solar policy or program.

The following program changes would address the two key challenges in low-income participation: motivating developers to identify low-income participants and reducing the financing risk of serving them. It would also rectify the imbalance that results from low-income customers contributing to solar programs such as Solar Rewards rebates to which they have no meaningful access, due to limited cash or sub-prime credit.

Carve Out Participation for Low-Income Residents

As has been done in three other states — Colorado, Maryland, and New York — Minnesota’s community solar program should require minimum participation by low-income residents. This would guarantee access to residents whose energy dollars already support the program and reduce energy burdens often offset with public funds. We ask the Commission to set a minimum standard of 5% for low-income participants.

The utility should also work with the state’s Energy Assistance Program to identify ways to maximize participation. One potential method would be to have the utility or developer grant subscriptions to Energy Assistance to give to qualified households, so that their privacy is protected.

A growing number of utilities are providing tariff-based financing for on-site energy improvements — efficiency or solar — that could also pay for community solar. The Commission should study the use of tariff-based, on-bill financing for community solar subscriptions, using only bill payment history for eligibility. The study should scope administrative costs, potential energy bill reduction, difference in the eligible market (especially among low-income participants), reduction in energy burden, and potential reduction in  demand for Energy Assistance.

Fostering low-income access to community solar falls into two broad sets of strategies: (i) targeted policies that lower costs and barriers to low-income participation specifically, and (ii) policies that reduce barriers for everyone. We believe the Commission should study a series of policies successfully implemented in other states, including those listed below, in order to shape standards for more inclusive community solar in Minnesota. These recommendations are sorted by the timing of required intervention in the development process in order to include them in a community solar project. Some items are duplicated from the near-term actions, to show the complete menu of options in context.

These policies address community solar development before application and interconnection.

Three states have tried minimum low-income participation mandates in their community shared solar programs. Colorado is the only one that has thus far reported significant low-income participation. It recently shifted away from a per-project minimum in favor of a per-program target, with the utility serving as the backstop for reaching prospective low-income participants. Colorado legislation, passed in 2010, requires developers to reserve 5% of electricity generated from each community solar garden for subscription by low-income households in order for their projects to qualify for state Renewable Energy Credits. Because of this move, the target became the ceiling for participation, as developers simply wrote off 5% of the project to comply and donated the shares to low-income recipients. A recent settlement agreement with the state tweaks the program, requiring the coordinating utility — also Xcel Energy — to aggregate the low-income requirement from commercial solar gardens and build one or two installations expressly for low-income customers. Developers are expected to tap grants for low-income solar gardens, and Xcel will make Renewable Energy Standard Adjustment funds available. Xcel customers pay 2% of their bills into the fund, to promote renewables.

In New York, the first phase of the state’s Community Distributed Generation program favored proposals including 20% or greater low-income participation, offering them expedited interconnection. However, no projects were installed under Phase I, due to a number of factors such as pending changes to community solar compensation, overarching interconnection difficulties, and the rapid expiration of the Phase I program..

Maryland’s community solar program sets aside 30% of total program capacity for solar installations that serve low- and moderate-income households. The program is in its infancy, however, and provides no lessons learned to date.

Lowering costs for low-income projects and giving them preferential treatment in queue status represent another set of crucial tools. In New York, NYSERDA recently announced funding to support community organizations in several pre-development activities, including customer acquisition and education, securing financing, and creating legal agreements with project developers. Given its recency, we have no evidence yet of the success.

Ontario’s feed-in tariff program (with capacity caps) gives priority points, provides per-kilowatt-hour adders, and reduces application fees for projects with aboriginal, community, or municipal ownership. The program’s fourth round in 2016 awarded contracts for a combined 241 megawatts of new generation, spread across 936 projects. Of those, 96 projects (41 megawatts) had aboriginal support, 186 (60 megawatts) had community ownership, and 413 (67 megawatts) had municipal or public sector participation.

The Minnesota Department of Commerce, and the corresponding local community action agencies, should direct their clients to the community solar program (where applicable). The program administrator (Xcel), community solar garden operator, and subscriber organization should coordinate and work in partnership with energy assistance providers/community action agencies to sign up low-income subscribers. Subscriptions could be designated for Energy Assistance recipients and the benefits passed through. Participants’ community solar subscriptions and benefits should be considered an integral piece of their overall energy assistance and work with (and not reduce benefits of) energy assistance, energy efficiency/weatherization programs, etc.

California requires 100 megawatts (MW) of its 600 MW solar program to be located in “disadvantaged communities,” though the policy does not specify whether subscribers themselves must be low-income. Still, this mandate may result in greater opportunity for workforce development in these communities. It may be worth considering a designation for location as part of a low-income program if combined with a workforce development initiative.

Other solar installation programs provide a model for workforce development, including California’s Single-family Affordable Solar Homes (SASH) program. Every SASH installation team includes either local volunteers or graduates from related job training programs, providing them hands-on experience. Crews on sub-contracted installations must include at least one paid job trainee. Through 2016, more than 6,800 people pursuing careers in the solar industry have received training through SASH projects — nearly 250,000 hours of combined experience.

A sister program, Multifamily Affordable Homes (MASH), also requires contractors to staff job trainees — up to five, based on the size of the project.

The cost and complexity of applying to the community solar program can also present a barrier to projects serving low-income participants, who may be harder to reach and require more financial security.

Of all the potential solutions to increasing low-income participation in community solar, policies that directly address the issue of financial wherewithal and credit risk will likely have the largest impact. Financing tools that expand access without means-testing may also lower administrative costs, since means-testing subscribers or cross-referencing with existing energy assistance recipients is non-trivial.

A tool introduced last year is the “backup subscriber,” which would allow institutional subscribers to act as the backstop for churn or default of low-income participants. Fresh Energy proposed this in Minnesota in April 1, 2016, comments. The “backup” framework, designed well, reduces concerns about taking on subscribers otherwise deemed risky by traditional financiers by allowing institutional participants to be a backstop for subscribers that leave the program or default on payments. The backup subscriber model also encourages developers to exceed minimum low-income participation thresholds, because the only limit is the capacity of the anchor institution (or the statutory 40% limit, in Minnesota, on the share of project electricity).

Pay-as-you-go subscriptions allow customers to avoid upfront charges and instead cover subscription costs over time, as their energy savings come in. This payment plan can be offered by the developer, but typically requires a prime credit score (or a credit backstop like the backup subscriber or loss reserve). Utilities like Xcel Energy can also offer payment plans using a opt-in tariff.

Community solar programs offer a unique opportunity for the many Americans who lack a sunny rooftop, the cash, or the credit to own part of solar array. But without careful design, these programs may simply serve as another barrier to customers whose energy interests are frequently on the bottom tier. These strategies can help make community solar work for everyone.

John Farrell directs the Democratic Energy program at ILSR and he focuses on energy policy developments that best expand the benefits of local ownership and dispersed generation of renewable energy. His seminal paper, Democratizing the Electricity System, describes how to blast the roadblocks to distributed renewable energy generation, and how such small-scale renewable energy projects are the key to the biggest strides in renewable energy development.   Farrell also authored the landmark report Energy Self-Reliant States, which serves as the definitive energy atlas for the United States, detailing the state-by-state renewable electricity generation potential. Farrell regularly provides discussion and analysis of distributed renewable energy policy on his blog, Energy Self-Reliant States (energyselfreliantstates.org), and articles are regularly syndicated on Grist and Renewable Energy World.   John Farrell can also be found on Twitter @johnffarrell, or at jfarrell@ilsr.org.