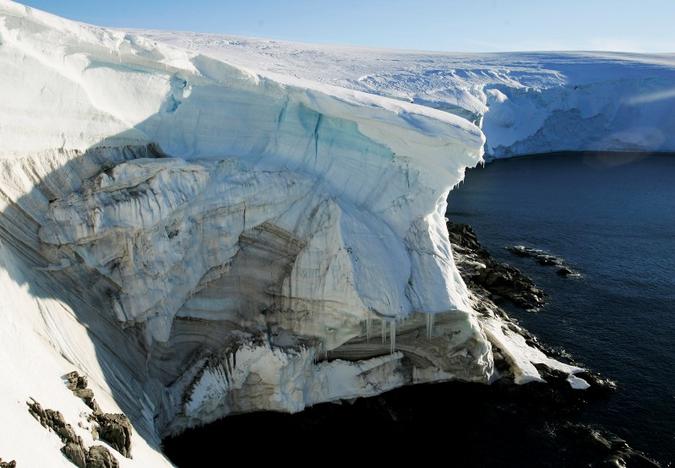 Melting ice shows through at a cliff face at Landsend, on the coast of Cape Denison, Antarctica January 2, 2010.   Winter sea ice around Antarctica shrank 65 percent in a natural warm period between Ice Ages about 128,000 years ago, when temperatures were slightly warmer than now, according to the report in the journal Nature Communications.

The conclusions were based on ancient ice cores drilled from deep in the Antarctic ice sheet. The chemistry of snow indicates how far it blew from the ocean before it landed and got compressed into ice.

The ancient shrinking of the ice helps underpin forecasts by a panel of U.N. climate experts that global warming will mean a 58 percent retreat in Antarctica’s sea ice by around the year 2200, the British scientific team that wrote the report concluded.

“A major reduction at 128,000 years ago could indicate a tipping point in the sea ice system,” they wrote.

Lead author Max Holloway of the British Antarctic Survey (BAS) told Reuters that the ancient shrinking of sea ice may have preceded a collapse of an ice sheet in West Antarctica that spilled into the sea and pushed up sea levels.