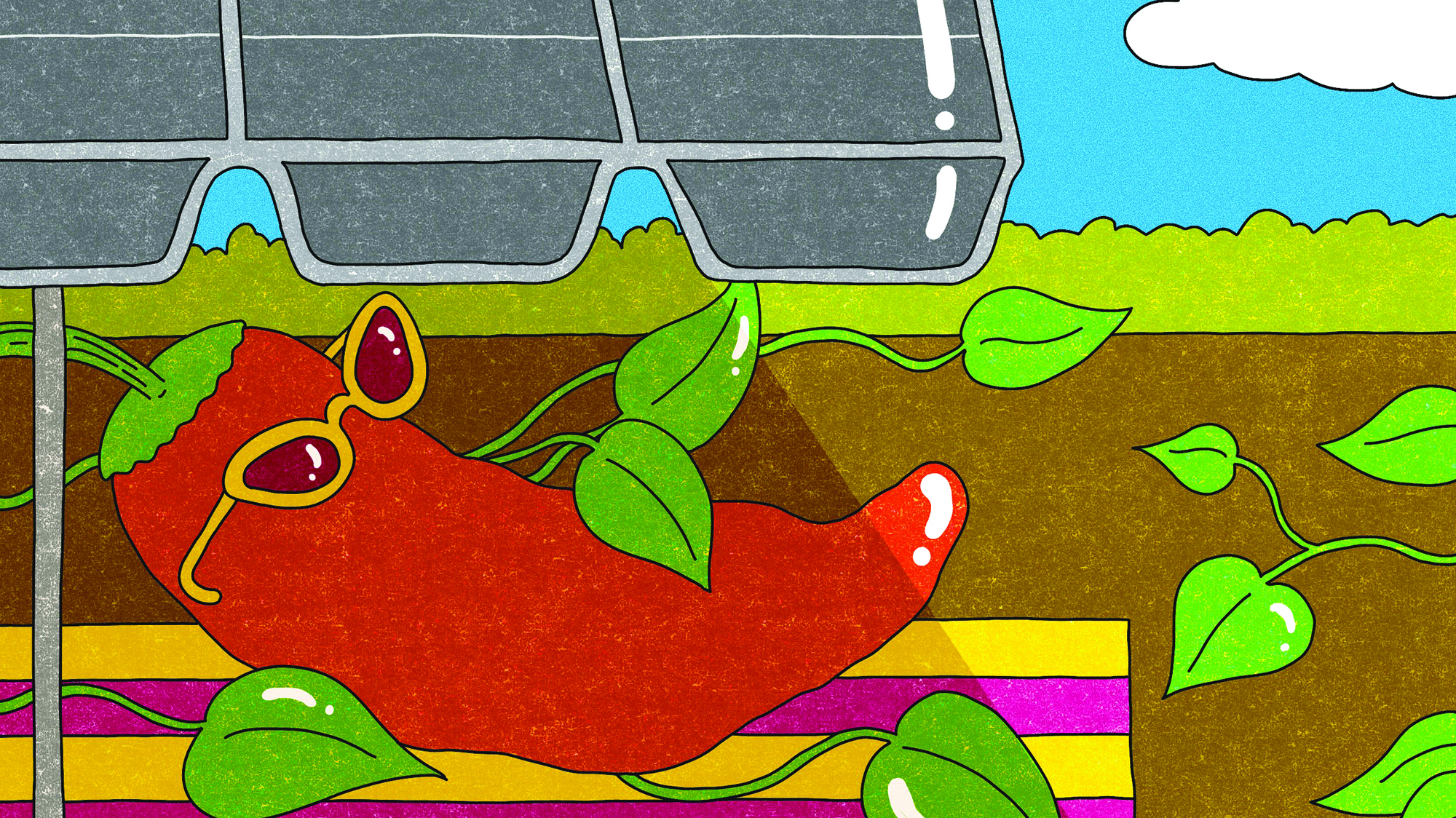 Why Harvesting Solar Energy Is a Win for America’s Farmers: Agrivoltaics reduce emissions, save water, and may even boost crop yields, in Mother Jones, by TOM PHILPOTT, NOVEMBER+DECEMBER 2022 ISSUE

America’s solar industry has boomed in recent years, and is slated for a big boost from the Democrats’ recently passed climate bill. Yet solar still only accounts for about 3 percent of electricity flowing into America’s grid—less than one-seventh the share from coal. If we want to phase out fossil fuels and accommodate an electric vehicle revolution, the sun’s contribution has to rise dramatically—and fast. But where to put all the panels?

One of the best places for solar installations, according to a 2019 study from the University of Utah and Oregon State, is where we already grow our food. That’s because, just like sun-loving tomato plants that fare poorly when the mercury creeps north of 85°F, photovoltaic (PV) panels lose their efficiency at higher temperatures. But that doesn’t mean we have to starve ourselves to keep lights on and cars humming. By elevating solar panels far enough above the ground so people, plants, and animals can operate underneath, we can “essentially harvest the sun twice,” says University of Arizona researcher Greg Barron-Gafford. Enough sunlight to grow crops gets past the panels, which also act as a shield against extreme heat, drought, and storms. Researchers calculate that devoting about 1 percent of US farmland to agrivoltaics would satisfy about 20 percent of our electricity demand.

Barron-Gafford is part of a loose global network of scientists, solar proponents, and farmers working to deploy agrivoltaics, the emerging practice of integrating solar installations with working farmland. His corner of the world, the American Southwest, is experiencing searing temperatures and diminishing water resources as the Colorado River dries up, forcing cuts in water deliveries to farms. Solar panels reduce the amount of sunlight hitting the soil, “which means you have less evaporation of water,” he says. “It doesn’t just burn off. It’s there so the plants can use it.”

Barron-Gafford and his team were able to triple the yield of chiltepin peppers, wild chiles common to the area, by growing them under PV panels on test plots vs. unshaded control plots; cherry tomato output doubled. What’s more, the soil on the PV plots retained 5 to 15 percent more moisture between waterings. “The plants aren’t just freeloading under the solar,” adds Barron-Gafford; they actually help the panels become more efficient. “Every time plants open their pores to let carbon dioxide in, water escapes,” he explains. This lowers the temperature beneath the panels—the same way restaurant misters make outdoor dining bearable in scorching heat. The cooling effect, the researchers calculated, resulted in a 3 percent bump in electricity production during the growing season.

In sunny flatlands near Boulder, Colorado, Barron-Gafford and his team are also working with Jack’s Solar Garden, a former hay farm that is now cultivating 5 acres of vegetables under solar panels and testing multiple crop varieties to see which will thrive in partial shade. Normally, those crops would need twice-daily watering. With the panels, every other day suffices, Barron-Gafford tells me.

In the relatively temperate northeast, University of Massachusetts, Amherst, researchers spent five years growing broccoli, chard, kale, and peppers under solar panels. There the solar plots typically had slightly lower crop yields than the controls, but equivalent yields during the hotter-than-usual 2016 season—all while churning out valuable electricity.

Researchers from Oregon State and the Indian Institute of Technology, Indore, recently calculated that devoting nearly 1 percent of US farmland to agrivoltaics—8.3 million acres, about the size of Maryland—would satisfy about 20 percent of the nation’s electricity demand, as coal now does, while producing ample food and creating 100,000 new jobs. This, they wrote, would be a “rare chance for true synergy: more food, more energy, lower water demand, lower carbon emissions, and more prosperous rural communities.”

Neither solar developers nor farmers have yet shown an appetite for the estimated $9.4 billion annual investment required to accomplish the feat described above. But the Inflation Reduction Act—which commits $20 billion over 10 years to farm conservation programs and solar expansion—might be the spur. “We can put solar in less-efficient places like rooftops,” Barron-Gafford says, or “out in the middle of nowhere where nobody sees it—but then you pay for all those transmission lines,” and the jobs are far from population centers. The best locations, he says, would be on the outskirts of cities “where lots of food production takes place.” There, farmers can gain a new revenue stream to supplement food sales: getting paid to generate electricity—and enjoy a little shade to boot.