Tony Laurenzana’s experience with Indianapolis’ first-of-its-kind electric car-sharing service has been much like the city’s as a whole: a two-year journey through the five stages of grief.

First, there was denial and anger when BlueIndy tore out parking spots in front of his then-girlfriend’s apartment on Massachusetts Avenue.

He gave in — the negotiation stage — and bought a charging membership so he could park his Chevrolet Volt at BlueIndy stations. And despite disappointment over BlueIndy’s limited reach across the city, Laurenzana later upgraded to a car-sharing membership and found that the service gave him an easy way to get around Downtown, especially during big events.

“It’s not necessarily too convenient for grocery-getting, but I think the service benefits people who don’t have their own vehicle,” Laurenzana said. “For me, I just got it because it was part of a promotion and I’ve found it handy on a few occasions where I didn’t necessarily want to pay for Uber.”

► More: Here’s how to use BlueIndy

► Hackney: Once I got rolling, BlueIndy rocked

Nearly two years after BlueIndy’s launch, the company is steadily coaxing more customers like Laurenzana into its tiny, eerily quiet white cars. Membership is growing, ridership is up and BlueIndy has made peace with some city officials who weren’t thrilled with the deal former Mayor Greg Ballard struck to make Indianapolis the pilot city for France-based Bolloré Group’s electric car-sharing concept.

Yet, amid BlueIndy’s growing popularity, resentment lingers over its rocky start. While most people have come to terms with BlueIndy’s presence, many business owners contend that the company has done irreparable harm to their stores and restaurants. 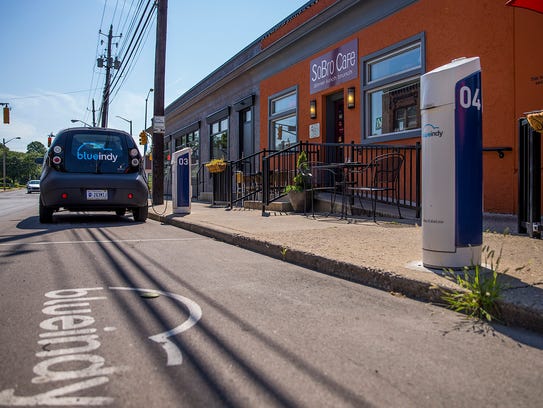 Buy PhotoBlueIndy has installed a station of five parking spots for their rentable smart cars, eliminating a stretch of public parking in front of SoBro Cafe along 52nd Street, Indianapolis, Monday, July 31, 2017. Some business owners say the BlueIndy stations have occupied public parking that was integral to their business. (Photo: Jenna Watson/IndyStar)

“This area’s so nice. The Cultural Trail’s so beautiful and you have these ugly cars sitting here taking up space. It’s horrible,” said Bob Jaeger, the owner of South of Chicago pizzeria on Virginia Avenue in Fletcher Place. “We all talk about it, we (complain) about it, but our hands are tied. We don’t know what to do.”

When BlueIndy started taking over public parking spots in 2015, businesses that lost those spaces had no recourse. Construction started on dozens of stations without warning, forcing customers of businesses such as South of Chicago to either find parking farther away or choose a different restaurant.

“Under the Ballard contract, they basically could go wherever they were capable of going and wanted to go,” said Andy Mallon, corporation counsel for Indianapolis.

Mayor Joe Hogsett’s administration negotiated changes to BlueIndy’s contract, and the City-County Council — which two years ago contemplated towing BlueIndy cars — reached a franchise agreement with the company. The new 15-year deal gave the city more leverage over where BlueIndy stations can go.

BlueIndy must provide a 16-day public notice before building new stations, a time frame that allows residents and businesses to object.

“They’d expressed a desire to press a reset on the relationship with the city,” Mallon said.

BlueIndy and city officials say that reset has been successful. Formal complaints filed to the Mayor’s Action Center regarding BlueIndy rose from 24 in 2015 to 28 last year — but have fallen to zero so far this year.

“It is very much a collaborative process,” said James Delgado, who in June joined BlueIndy as general manager. “Certainly, I understand the history of BlueIndy, the launch and some of the pushback from business owners, in particular, that were concerned. (Now) there’s a process upfront, before a station opens, they can have a say and express support or concerns or indifference.”

Although the new process has helped BlueIndy and the city avert conflict with additional businesses, those that were affected by the BlueIndy’s initial build-out remain exasperated with the stations in front of their storefronts.

The franchise agreement negotiated between BlueIndy and the City-County Council last year gave businesses a one-time opportunity to protest existing BlueIndy stations and prove that they caused “demonstrable substantial economic harm or obstruction of customary access or obstruction of the ability to conduct normal business.”

BlueIndy agreed to move up to five existing stations at its own expense and up to two more stations on the city’s dime, for a total of seven, if businesses could meet that threshold. A handful of business owners took advantage of the opportunity, writing letters to the city requesting that stations be moved.

Napolese, an artisan pizzeria, submitted sales figures to the city showing that its 49th Street location lost as much as 10 percent in monthly revenue from 2014 to 2016, which the restaurant attributed to BlueIndy. SoBro Cafe on 52nd Street submitted a letter stating that sales dropped between 12 percent and 20 percent “for no apparent reason other than parking became more difficult.”

Those business owners, though, say they have largely been left in the dark during the months since they filed complaints about the stations.

“From my perspective, it seemed like a token, ‘Go ahead and let us know you’re not happy,’ and then they don’t respond,” SoBro Cafe owner Helger Oomkes said.

Lawrence Kaseff, who owns a small hardware store called American Hardware on Virginia Avenue in Fountain Square, said city officials seemed sympathetic to his complaints about BlueIndy, but ultimately were unhelpful. In addition to lost business, Kaseff said the station in front of his store has made it difficult for customers to load and unload heavy equipment.

“I heard from about three different people, ‘It shouldn’t have been here,'” Kaseff said. “Well, it’s still here. So, whatever people tell me doesn’t matter.”

Kaseff and Oomkes both said they gave up hope that the stations near their businesses would be moved. Oomkes remains angry that Indianapolis gave BlueIndy permission to build its stations at will.

“If they’re like a business, they should buy up empty lots and set their thing up in there,” he said. “It’s really damaged my business.”

City officials say they are still negotiating with BlueIndy on behalf of the business owners who filed complaints and have the strongest cases.

BlueIndy initially opposed moving any of those stations.

Both sides are talking, though, he said.

“I would say we would want resolution on this within the next six weeks,” Mallon said.

Delgado of BlueIndy declined to address those talks, but acknowledged the company is negotiating with the city.

BlueIndy launched as a $50 million project. The company took on $41 million in startup costs, the city chipped in $6 million and Indianapolis Power & Light Co. agreed to pay the rest. BlueIndy also pays the city $45,000 a year.

As part of its contract, BlueIndy agreed to open 100 stations. It already has 85 active stations, up from 25 in September 2015, with five more under construction. The company could reach its initial target by the end of this year.

“We’re inching up to achieving that performance mark of opening that 100th station. Then it’s going to be really about, OK, can the city support 200?” Delgado said.

Delgado sees a clear path toward opening somewhere between 140 and 160 stations. Getting the rest of the way to 200 would depend on sustained job growth in the city, particularly among technology companies, he said.

BlueIndy has several barriers to entry for would-be users. It requires customers to pay up to $20 a month for memberships — plus additional costs for time spent driving — and to get behind the wheel of a car that is probably much different from anything they’ve driven before.

James Montague, who lives on the Old Northside, takes BlueIndy to get to Broad Ripple, a $4.25 trip, or Fountain Square, a $5 to $6 trip. He also uses it go to work and the airport.

Montague, an information-technology consultant, was an early adopter, signing up for the service at the beginning. BlueIndy enables him to share one car with his fiance and avoid paying for the expenses of two cars.

The biggest problem Montague sees for BlueIndy is that Indianapolis residents are accustomed to having one car per person.

“I think most of the reluctance (to try BlueIndy) is a lack of need,”  he said. “If you have two cars, it’s not something you seek out as quickly. But we have used it with a lot of friends who will come to our house from the north side and (take) BlueIndy Downtown. I think they’ve been surprised by how simple it is.”

BlueIndy’s easiest sell has been to students, who tend to be younger and more willing to try new technology. The company also has had success marketing to people who fly frequently. BlueIndy’s airport station accommodates 20 vehicles.

Now, the company is trying to find a broader customer base for its electric car-sharing plan. In addition to Indianapolis, parent company Bolloré Group has launched a more limited version of its concept in Los Angeles called BlueLa.

“I still think there is a gap in the knowledge of what BlueIndy is, or what can I, as a consumer, use it for,” Delgado said. “We are in a growth-and-education phase and I see us in that phase for at least the next couple years.”

If so, that’s an improvement from the previous phase in which seemingly everyone was angry at BlueIndy for taking up parking spaces.

“I think the city is supportive of this being a successful endeavor,” said Tim Joyce, deputy director for policy and planning for the city’s Department of Public Works. “Yes, it maybe had some bumps and bruises. We’ve worked with them to work it out.”

Or, to put it into one word: acceptance.

New forms of shared mobility—such as bikesharing, carsharing, ride-hailing and microtransit—offer new opportunities to address some of the most critical issues facing society today.

In combination with public transit, shared mobility is a powerful tool that cities can use to help reduce transportation costs, lessen air pollution and expand access to jobs, opportunity and a better quality of life. But to fully realize these benefits—and to truly address poverty, climate change and racial inequality—these new modes must work for everyone.

That’s why the Shared-Use Mobility Center is focused on bringing together the public sector, private industry and local communities to forge partnerships, develop resources and advance new solutions.

To focus our efforts we set an ambitious goal: take 1 million cars off the road in the U.S. over the next five years by scaling up shared mobility and public transit. Here’s how:

By working together, we believe cities across the nation can help reduce reliance on private automobiles and increase access to environmentally sound, cost-effective transportation options for all.

Interested in learning more about SUMC’s work? Check out our FY 2016 Annual Report for information on our latest projects, theory of change and more. You can also keep up to date on SUMC’s latest activities by signing up for our weekly newsletter, the Mobility Hub.