European fund managers are casting an increasingly skeptical eye towards the oil industry, concluding that the industry’s financial future looks grim, according to a new survey published by a London-based organization today.

Just 18 percent of the responding fund managers, including representatives of firms based in the UK, France, Spain, and Italy, predicted that “oil companies will be good investments if their business is still focused on fossil fuels in five years’ time,” according to the survey, published by the UK Sustainable Investment and Finance Association (UKSIF) and the Climate Change Collaboration.

“68 percent believe they will still be attractive if they adopt business models aligned with the Paris targets,” it adds, referring to the international agreement to limit global warming to well below 1.5°C (2.7°F). “However, just under a quarter do not see oil companies as good investments in any timeframe.” 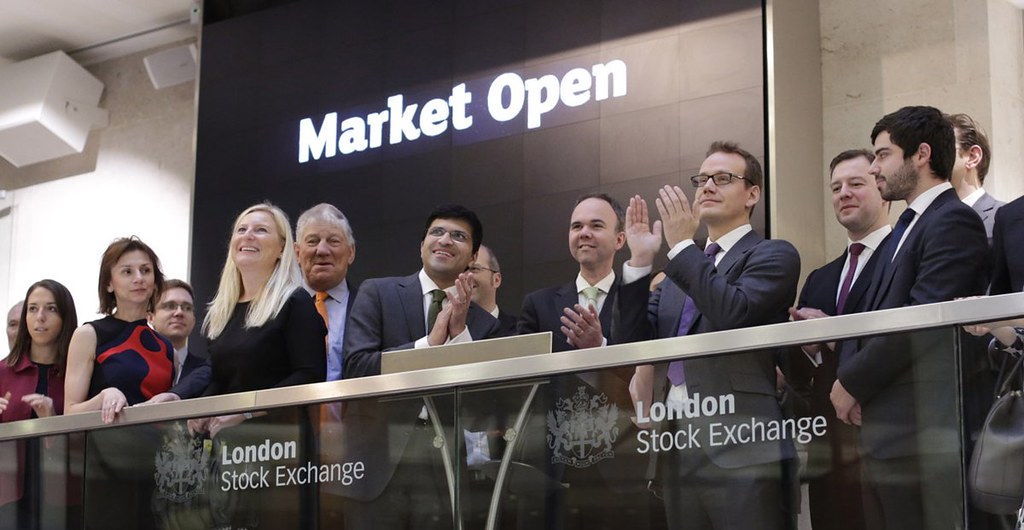 ‘Writing Is On The Wall For Oil Companies’

“The writing is on the wall for oil companies that do not support global efforts to avoid a climate catastrophe by urgently phasing out fossil fuels and transitioning to a low-carbon world,” said Simon Howard, CEO of UKSIF. “The investment community recognizes that these will make increasingly risky investments.”

One out of every four dollars professionally managed in the U.S. — a total of $12 trillion worth of assets — is now invested in “responsible” or “sustainable” investment funds, CNBC reported this month, adding that assets invested in those funds have grown nearly 40 percent since 2016 (and 18-fold since 1995).

“It is the same reason teenagers are walking out of school to protest for climate action, even though politicians are stuck,” Timothy Yee, co-founder of Green Retirement in Alameda, California, told CNBC. “People who have no ties to the fossil industry but a vested interest in living on this planet understand why fossil-fuel-free portfolios and 401(k) plans are essential.”

Investment funds report a growing level of interest in climate change risks from investors, according to the new UKSIF survey. 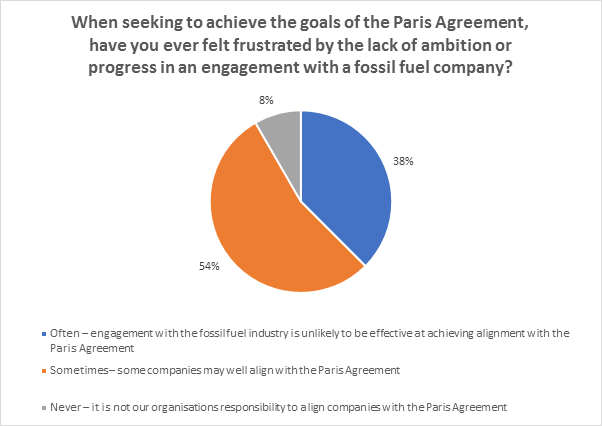 “However, only 18 percent have set deadlines for oil companies to take action, and these range from 2021 to 2030,” UKSIFreported. “Most (57 percent) have not decided what action to take if oil companies do not meet their demands.”

In other words, so far, fund managers have largely adopted a strategy of talking with oil companies about climate concerns, but haven’t yet followed up with any sort of enforcement action.

UKSIF also called attention to the funds’ own compliance with the Paris Agreement, noting that only one in five required all of their investments to align with the global climate agreement, and slightly less than half had no explicit policy at all.

“They should also coordinate their engagement policies and give them real teeth by setting oil companies deadlines and spelling out the consequences if they fail to take action,” he added.

Central banks are also taking increasing notice of the economic hazards posed by climate change. The Network for Greening the Financial System isn’t a grassroots environmental group — its members are central banks, including three dozen central banks and regulators including the Bank of England, the People’s Bank of China — but not the U.S. Federal Reserve.

Critics say that the effort is slow, plodding, and focused too heavily on producing reports. But “now that central banks have said the issue is linked to financial stability, no executive can ignore this without facing the risk of shareholder suits,” a recent Financial Times editorial said.

“The prime responsibility for climate policy will continue to sit with governments,” an open letter signed by Mark Carney, governor of the Bank of England; François Villeroy de Galhau, governor of the Bank of France; and Frank Elderson, chair of the Network for Greening the Financial System, said. “And the private sector will determine the success of the adjustment. But as financial policymakers and prudential advisors, we cannot ignore the obvious risk before our eyes.”

That letter was released as large sections of London remained shut down by a 10-day Extinction Rebellion protest and series of direct actions, which involved barricades of roads and bridges at what organizers said was an unprecedented scale.

“We would like to thank Londoners for opening their hearts and demonstrating their willingness to act on that truth,” organizers said in an April 24, 2019 statement. “We know we have disrupted your lives. We do not do this lightly. We only do this because this is an emergency.”

In their own restrained language, some fund managers are starting to sound a similar alarm.

“The IPCC’s 1.5C report was the latest in a series of stark warnings about the critical threat that climate change presents. Yet current climate policies are projected to result in over 3C in warming,” said John David, head of Rathbone Greenbank Investments. “This ambition gap must close.”