6 March 2018, by Salvatore Babones, see full article and Forbes’ great charts on the strong rise of Battery EVs in China.

China’s big cities are famously polluted. Air pollution is responsible for as many as one million excess deaths per year in China, according to estimates from the World Health Organization. The government had some success in improving air quality in Beijing this winter, but most of this success was achieved by simply moving polluting industries farther away from the capital. If China really wants to meet air quality standards nationwide by 2035, as the government has promised, it will need systemic change.

That systemic change is coming from China’s auto industry. Come back in ten years, and you’ll find a China that’s well on its way to blue skies and clean air, at least in its major urban centers. That’s because motor vehicles are the largest source of pollution in most of China’s cities, and China’s auto industry is rapidly turning all-electric. Chinese automakers churned out 680,000 all-electric cars, busses and trucks in 2017, more than the rest of the world combined. And China’s output is growing faster than the rest of the world’s too. 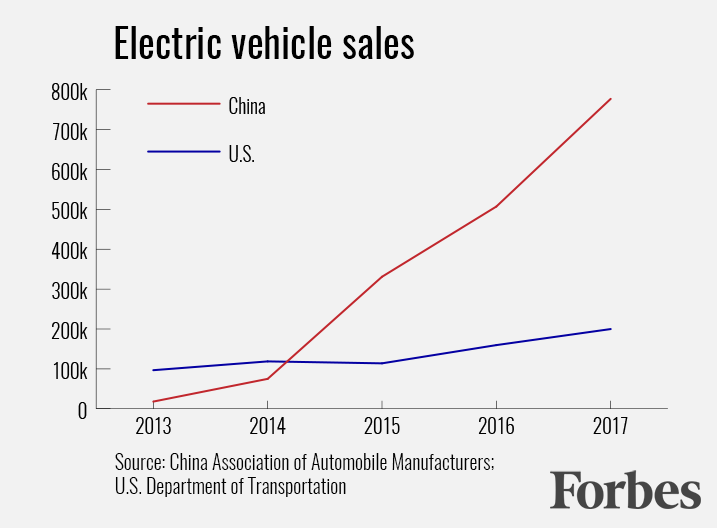 There’s even better news when it comes to the heaviest polluters, busses and trucks. China produced more than 200,000 all-electric commercial vehicles last year, amounting to nearly 5% of total output. In 2017, southern China’s tech hub of Shenzhen completed the conversion of its entire bus fleet to battery electric vehicles (BEVs). Other cities are sure to follow suit.

Plug-in BEVs are the only true all-electric vehicles. Their main green competitors, plug-in hybrid electric vehicles (PHEVs), are essentially just hybrids with a power cord. Whereas PHEVs dominated the U.S. plug-in market early on, and still make up nearly half of all plug-in vehicle sales in the U.S., all-electric BEVs dominate in China. They are especially dominant in China’s commercial vehicle sector, where PHEVs are rapidly disappearing.

The challenge for BEVs is range. Without a backup gasoline engine to fall back on, BEVs can only go as far as their batteries will take them on one charge. China is pushing its automakers to develop longer-range BEVs by shifting subsidies to the higher end of the market. But with driving ranges for most modestly-priced (i.e., non-Tesla) BEVs struggling to pass 100 miles (160 km) on a single charge, potential buyers are understandably wary of running out of juice.

Big commercial operators that run set routes–like Shenzhen’s 16,359-strong bus fleet–can calculate in advance exactly how much power they need to get their vehicles from home base to their destinations and back again. Ordinary drivers need more options.

That’s where China is really leading the way. It has pioneered the mass development of public charging piles, with 214,000 already in place at the end of 2017. These are places where anyone can charge up their cars, and are in addition to the 232,000 private charging piles installed Chinese electric car owners’ own homes. 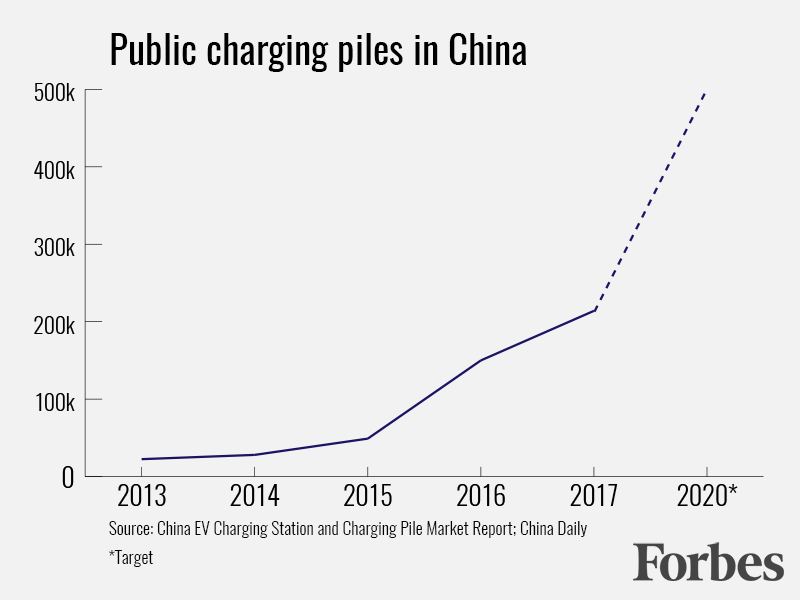 China plans to have 500,000 public charging piles in place by the end of 2020. China’s State Grid alone plans to provide 120,000 of these, up from just 10,000 today. Others are being installed by cities like Shenzhen, which are experimenting with roadside charging piles at public parking spaces. More are being offered by private operators, most of which cooperate with State Grid to manage electricity load.

The charging pile model is the key to transitioning entire regions to BEV-only automobile ecosystems. Today’s petroleum ecosystem works by funneling people to centralized gas stations, where people can fill up their tanks in a matter of minutes. Electric car charging takes at least half an hour to get a meaningful top-up. So instead of centralized stations, an electric car ecosystem needs widely distributed charging points where people can plug in while they park. 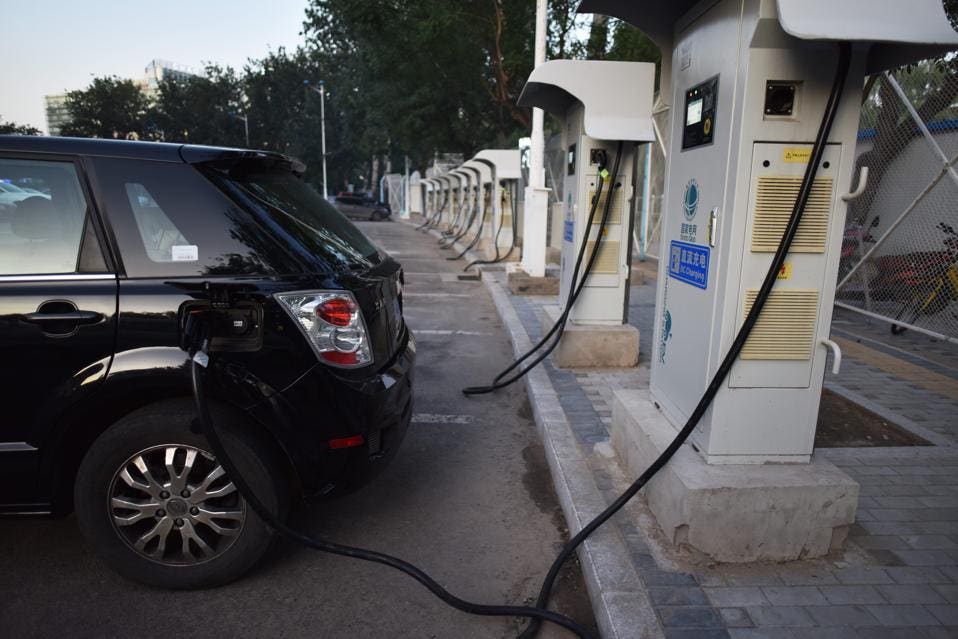 Imagine restaurants and shopping malls with “premium” parking spaces where you can plug in while you shop, and you can see the future of electric cars. Once enough of those spaces are available, many Chinese cities are likely to go all-electric, banning internal combustion engines completely. And it is likely to happen well before 2035. One by one, China’s big cities will soon become places where people can breathe free.

Salvatore Babones is the author of American Tianxia: Chinese Money, American Power, and the End of History. He also hosts Midnight in America Friday nights on YouTube. Follow him on Twitter @sbabones.