Global warming and climate change get a lot of attention — well, not in the mainstream media, but among niche media outlets like CleanTechnica. However, whether in the mainstream media or in niche publications, some of the big challenges of a quickly changing climate are not often highlighted, and I’m quite confident that most people haven’t considered them at all.

Yes, people probably get the point that global warming and climate change meanhigher sea levels, melting ice in the Arctic, fewer species, less snow for skiing, and bigger storms and droughts. But thinking 1–3 steps further doesn’t seem to be all that common, and media coverage of the following topics has been slim or nonexistent in much of the mass media.

Immigration and war are two hot topics of this year’s US presidential election season. I’m an American immigrant living in Europe and I’m well aware that the United States itself is a country built by immigrants, pretty much continuously. I’m certainly not against immigration! However, without a doubt, fast, large-scale immigration often poses a challenge for countries taking in the immigrants.

The Migration Policy Institute writes: “The impact of climate change as a driver of human migration is expected by many to dwarf all others. … The most significant mechanisms of displacement are sea-level rise, higher temperatures, disruption of water cycles, and increasing severity of storms.”

In the US, Mexican immigration is expected to increase due to global warming, according to Princeton University researchers. These immigrants have already been termed “climate migrants.”

A study published in Nature Climate Change found that heat stress is a driver of migration out of rural Pakistan. Who’s surprised?

A few major media outlets have covered this topic. The Guardian, TIME, and The Independent all have great pieces on it.

An article in The Guardian states: “Thanks to global climate change, mass migration could be the new normal.”

An article in TIME writes: “Even as Europe wrestles over how to absorb the migrant tide, experts warn that the flood is likely to get worse as climate change becomes a driving factor.”

From The Independent: “The current refugee crisis marks a watershed moment in the history of global warming because it’s the first wave of emigration to be explicitly linked to climate change, according to one leading scientist, who predicts rises in temperature and increasingly extreme weather will unleash many more mass movements of people in the future.”

Here’s an extended quote from The Guardian:

“There are lots of estimates as to what we can expect to see in the near future, but the best known (and controversial) figure comes from Professor Norman Myers, who argues that climate change could cause 200 million people to be displaced by 2050.

“In fact, it’s already happening. According to the Pentagon, climate change is a ‘threat multiplier’ and does appear to be increasing risk of conflict.

“Indeed a new study released in March suggests this is exactly what happened in Syria, after a severe drought in 2006. As the study’s co-author, Professor Richard Seager, explains, ‘We’re not saying drought caused the [Syrian conflict]. We’re saying that added to all the other stressors, it helped kick things over the threshold into open conflict. And a drought of that severity was made much more likely by the ongoing human-driven drying of that region.’ “

From that last article linked above:

“A new study finds that human-caused climate change was a major trigger of Syria’s brutal civil war. The war that helped drive the rise of the terrorist Islamic State of Iraq and Greater Syria (ISIS) was itself spawned in large part by what one expertcalled perhaps ‘the worst long-term drought and most severe set of crop failures since agricultural civilizations began in the Fertile Crescent,’ from 2006 to 2010.”

I know, it’s shocking. Who would have thought that an extremely long and harsh period of drought and crop failures would lead (in part) to civil unrest and war?

“That drought destroyed the livelihood of 800,000 people according to the U.N. and sent vastly more into poverty. The poor and displaced fled to cities, ‘where poverty, government mismanagement and other factors created unrest that exploded in spring 2011,’ as the study’s news release explains.

The study, ‘Climate change in the Fertile Crescent and implications of the recent Syrian drought,’ found that global warming made Syria’s 2006 to 2010 drought two to three times more likely.

A long article on the topic from Science Heathen eloquently summarizes:

“Modern civilization, and its massive number of infrastructure-dependent people, is almost entirely reliant upon the delicate infrastructure of the modern world for its survival. If any significant damage were to occur to this delicately-balanced infrastructure, large numbers of people would starve, be forced to migrate, or be motivated to war — while, in the process, becoming increasingly susceptible to disease and illness. …

“Large scale war or civil collapse is almost an inevitability in regions facing very scarce freshwater resources, very limited agricultural-land/productivity, and large-populations. And these are exactly the conditions that many regions of the world are expected to face as climate change intensifies.”

So, seriously, if you are concerned about the “modest” amount of migration and war we are seeing today, you better be concerned about global warming and climate change, and the ridiculous amount of societal disruption they will cause as they get more and more extreme. 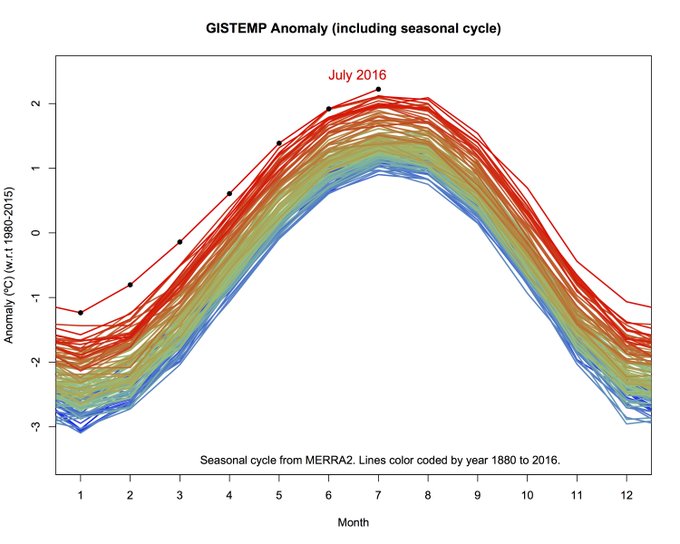 July 2016 was absolutely the hottest month since the instrumental records began.