This isn’t just about the climate crisis. It’s about investing in jobs for American workers.

According to the White House’s energy plan, President Trump is committed to “help[ing] American workers, increasing wages,” and bringing “jobs and prosperity to millions of Americans.” But the president is approaching these goals the wrong way.

Instead of trying to return the country to the nineteenth and twentieth centuries with fossil fuels, he should be focusing on the sector that’s growing 12 times faster than the rest of the US economy and be promoting renewable energy. Renewable energy creates more jobs and better jobs for Americans than the fossil fuel industry. Want proof? Just keep reading.

1. RENEWABLES EMPLOY AT LEAST THREE TIMES AS MANY WORKERS IN THE US ELECTRIC POWER SECTOR AS THE FOSSIL FUEL INDUSTRY. 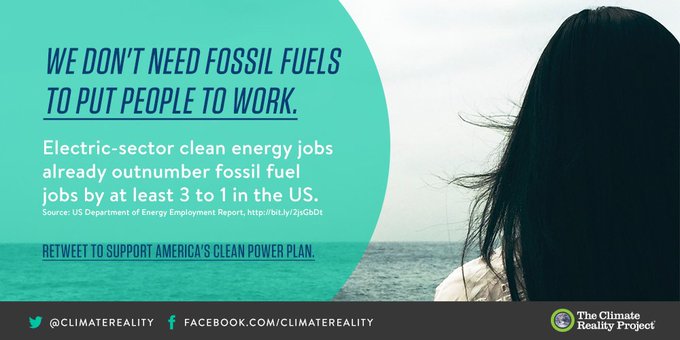 ✔@ClimateReality Big Polluters would have you believe that clean energy isn’t putting people to work. That’s far from the truth.

Renewable energy jobs already dwarf the number of fossil fuel jobs in the US electric power sector. Add in the 2.2 million Americans who work in energy efficiency and 950,000 employed in making cleaner vehicles, and clean energy jobs greatly outnumber all types of US fossil fuel jobs (including those from mining and extraction).  And with demand for clean energy growing every year, we can expect that this trend won’t slow down any time soon.

2. IN FACT, SOLAR IS THE TOP EMPLOYER IN THE US ELECTRIC POWER SECTOR, ACCOUNTING FOR 43 PERCENT OF THE TOTAL JOBS IN THE FIELD. 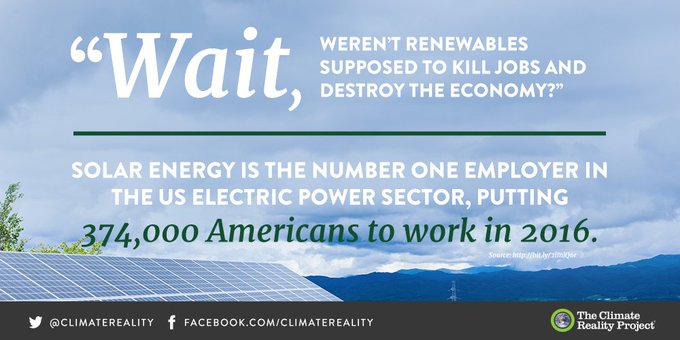 Compare the nearly 374,000 Americans working in solar alone to those who work in the entire fossil fuel electric power industry (around 187,000) and you see that clean energy is easily beating the dirty competition in putting Americans to work. What’s more, 1 in 50 jobs created in 2016 was in the solar industry.

3. IT’S NOT JUST SOLAR—WIND ENERGY IS CREATING NEW JOBS, TOO! 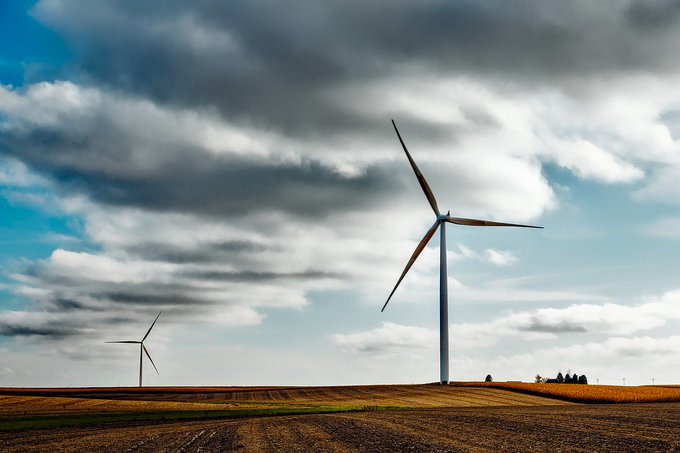 4. RENEWABLE ENERGY JOBS ARE ON THE RISE.

✔@SEIA The #solar industry is creating jobs 12x faster than the rest of the U.S. economy! #SolarIsNow https://seia.us/2jc6zSx

According to The Solar Foundation, “solar jobs in the United States have increased at least 20 percent per year for the past four years, and jobs have nearly tripled since the first Solar Jobs Census was released in 2010.” At the same time automation means traditional jobs in coal and other fossil fuels are declining, jobs in renewables just keep growing.

5. THE CLEAN ENERGY SECTOR IS GROWING IN ALL 50 STATES, PUTTING AMERICANS TO WORK ALL ACROSS THE COUNTRY. 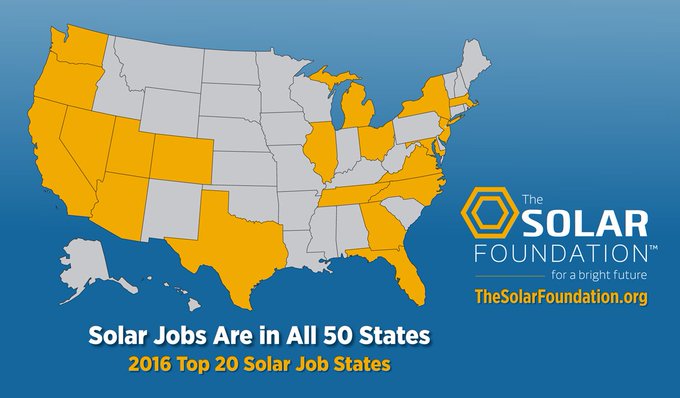 ✔@SEIA In 2016, #solarjobs increased in 44 states! Find out how many jobs the #solar industry supports in your state at http://solarjobscensus.org !

Pop quiz: which state employs the most solar workers per capita?

Most people would guess California. The right answer: Massachusetts. Following the Bay State are  Nevada, Vermont, California, and Hawaii. The reason? Today’s solar technology is so advanced that photovoltaic panels can still produce enough power to be viable sources of electricity even in places that don’t have as much sunlight as states like California or Nevada.

6. RENEWABLES OFFER FOSSIL FUEL WORKERS A PATH TO JOBS WITH A FUTURE. 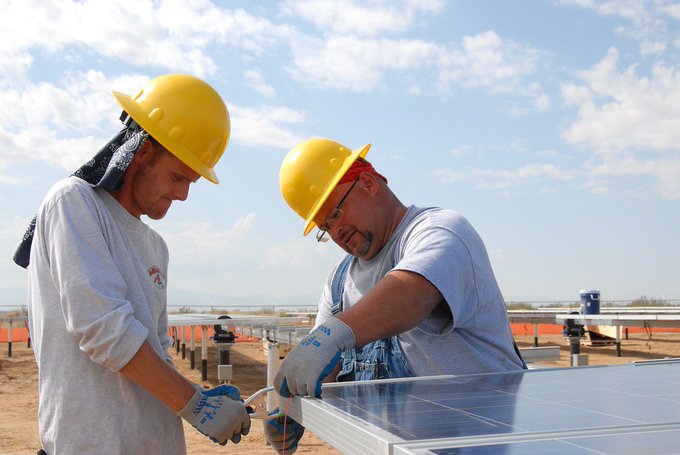 Solar jobs in Maryland are through the roof as the state prioritizes renewables http://bsun.md/2l59QQl

Let’s be clear: environmental regulations and clean energy aren’t the main factors behind declining coal jobs (you have to look at increasing automation in the industry and cheap natural gas for those).  But many Americans who’ve spent their careers working in coal have incredibly valuable skills that – with the right policies and training initiatives – can be put to use in well-paying solar and wind jobs with a future.

A recent study found that solar’s rapid and projected continuing expansion offers workers in shrinking fossil fuel industries real career opportunities – and we’re already seeing the proof. Just look at the success of Solar Ready Colorado, which is working to retrain hundreds of laid-off coal miners and veterans in Colorado’s Delta County – a region that’s lost over 1,000 coal mining jobs in just the past three years – for long careers in the solar industry.

7. SOLAR POWER EVEN EMPLOYS A HIGHER PERCENTAGE OF VETERANS THAN THE REST OF THE WORK FORCE.

We hear a lot of lip service to veterans from politicians. What we’d like to see a lot more of is real support for the men and women who give so much when they leave the service. One way we can do that is by supporting the clean energy sectors that employ them. Witness: while veterans make up 7 percent of the workforce, they make up 9 percent of the workers in solar jobs. The takeaway is clear: investing in clean energy is investing in our veterans.

8. THE AVERAGE WAGE FOR JOBS IN RENEWABLE ENERGY IS $5,000 ABOVE THE NATIONAL AVERAGE WAGE.

Renewables aren’t just creating jobs — they’re creating better jobs that pay hardworking Americans what they deserve. This means workers in renewable energy are able to contribute more to the US economy than the average American. If the president is serious about improving working wages, investing in renewable energy is the way to go.

9. JOBS IN RENEWABLE ENERGY ARE ALSO HEALTHIER FOR WORKERS THAN THOSE IN FOSSIL FUELS. 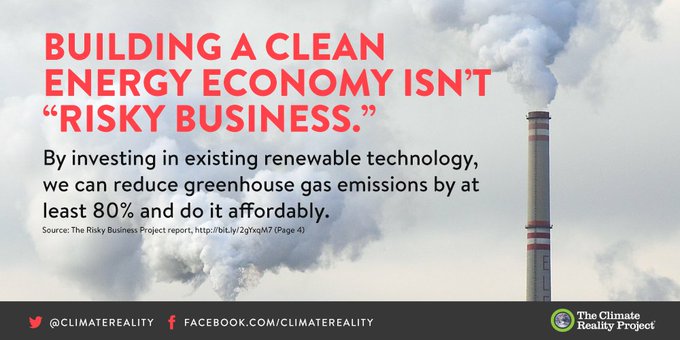 What do black lung disease, risk of physical injuries and disorders, hearing loss, and asbestosis all have in common? They’re common health issues associated with coal mining. Green energy jobs, meanwhile, aren’t putting Americans’ health at risk. This begs a simple question. Why wouldn’t we want to create safer jobs for our workers?

10. IT’S NOT JUST HAPPENING IN THE US — DEMAND FOR RENEWABLES IS CREATING MILLIONS OF JOBS WORLDWIDE. 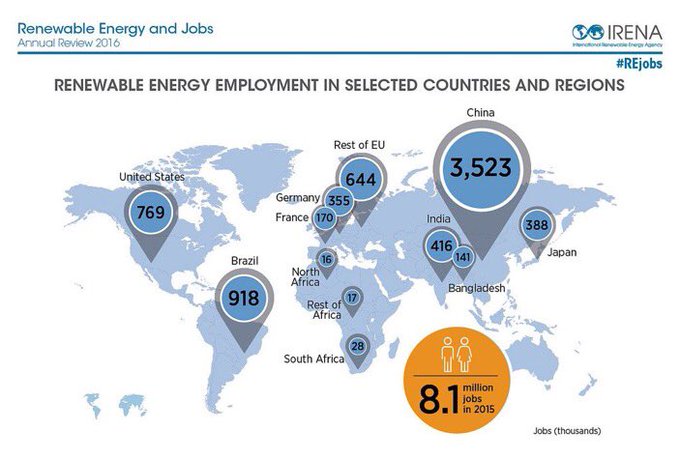 According to a 2016 report, renewable electricity employs more than 8.1 million people across the world. The market is growing – creating jobs at home and demand for American products and services across the planet.

As the NRDC says, “If the Trump administration hopes to fulfill its promise to Americans to create good-paying local jobs, it needs to look no further than the rapidly developing clean energy arenas.”